Kansas City Chiefs OTAs: 9 things to remember from day one

The KC Chiefs took the field on Tuesday for their first practice session with both the rookies and veterans. The first day of OTAs featured Branden Albert, who returned to the team, a battle at inside linebacker, another battle at cornerback, three injured players, and a new starting offensive line. Read on for what you need to know from day one of OTAs.

Share All sharing options for: Kansas City Chiefs OTAs: 9 things to remember from day one

1. Shaun Draughn among 3 who don't practice

Shaun Draughn didn't practice after a sports hernia a few weeks ago. No word on how long he'll be out. The problem for him is that he's entering an important offseason as he battles Cyrus Gray and rookie Knile Davis for snaps. I really don't know who is leading among that group right now or who will end up winning the honor of backing up Jamaal Charles.

Other injured players include tight end Tony Moeaki, who had offseason surgery, and defensive lineman Marcus Dixon, an offseason free agent acquisition who had lower back spasms. (From April: Moeaki didn't practice at the voluntary minicamp either.)

2. The other inside linebacker 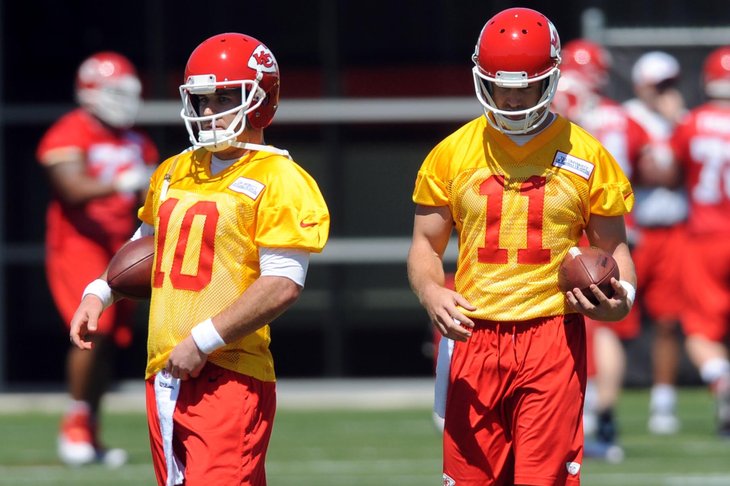 The linebacker spot next to Derrick Johnson goes to ... Akeem Jordan? For now, it appears. This is the other position (besides offensive tackle) where a rookie could realistically win the starting job from the get-go. Alabama linebacker Nico Johnson was a fourth round pick and early predictions have been that he'll be a contender for the spot previously held by the late Jovan Belcher.

"The thing you get with Akeem is he's a smart football player," Andy Reid said. "He hasn't played in a 3-4 but he gives you the trust that he can do that. He's a good solid football player is what he is and he doesn't make a lot of mistakes. He's a phenomenal special teams player, so you get both those things - a guy that doesn't make mistakes on the field as a linebacker and then you really get something special there on special teams."

This is Jordan's job until Johnson can take it from him. I think it's a matter of time, only whether it'll come in the offseason, training camp or sometime during the regular season.

If/when Johnson gets the job, the Chiefs four starting linebackers will be repping some big time schools: Penn State, Alabama, Texas and Georgia.

It's May. Things can and most definitely will change. But Reid is staying true to his word that Robinson would get the first crack to start opposite Brandon Flowers. At the voluntary minicamp in April Robinson lined up with the ones and he did so again at OTAs on Tuesday.

Despite that, I continue to believe Sean Smith will ultimately take over that role and be paired with Charles Flowers. The reason you go with Smith there is he's not only taller, allowing him to cover those big dudes in Denver, but also because Smith can't play multiple positions like Robinson can. Use Robinson's versatility to your advantage.

Dunta Robinson nearly had a pick-6 on Alex Smith, and the QB joked about it later. Pretty competitive between DBs and WRs thruout. #Chiefs

You know you're in a good football town when multiple reporters write about an interception in practice. Feed the masses! We want football!

4. Branden Albert comes back in shape

Not that there was any doubt that he would. Reid said he was pleased with his new bookend tackles, Albert and Eric Fisher.

What Albert had to say... 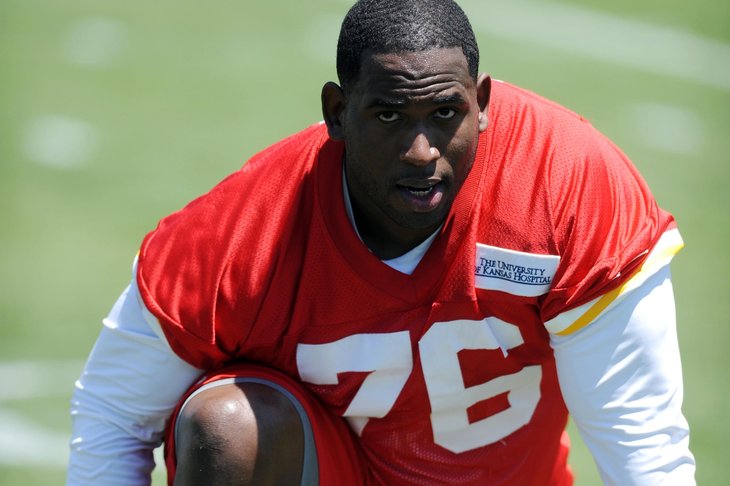 Q: Was there a time when you didn't know if you'd be back here? "I'm just happy to be back," Branden Albert said. "I'm here now. I'm not worried about what I thought before. I'm happy to be here with my teammates and work."

"I thought both of them did a nice job today," Reid said. "I was curious to see both of them in there. I thought Branden came back in good shape and we moved at a pretty fast clip today and he was able to hang in there and it looked like he held his own. And Eric, I thought he did a nice job with the ones. He was in working with the first group."

5. Your starting offensive line ... for now

Barring injury or a trade, four of those five spots look close to being set. The question mark is at left guard. Jeff Allen is competing with Geoff Schwartz for a starting gig. Allen was a second round pick last season while Schwartz was picked up this offseason. Interesting battle there. It's hard to tell how they're doing this early in the offseason, given they won't be in pads until August. Schwartz and Allen could both potentially play a reserve tackle role, too. (By the way, @GeoffSchwartz is a great Twitter follow.)

Remember, this is a new Chiefs regime. What we thought we knew about the offensive linemen that were here may not be the case under John Dorsey and Andy Reid. After the release of Eric Winston, it's fair to say that we may not know as much as we think we do when it comes to the offensive line.

... This tweet will be remembered. We're entering year three with him and there's really not many people that expect him to blow up and become a big threat on the Chiefs offense, like so many other first round picks entering year three. That's the year you want to see players start to break out; in Kansas City it's a make or break year for Baldwin.

610 Sports' Carrington Harrison put the over/under of Jon Baldwin touchdowns this year at 3.5 Are you taking the over or under?

Smart money is on the under. Dwayne Bowe's gonna get his. So is Dexter McCluster and Anthony Fasano and Travis Kelce / Tony Moeaki. So is Donnie Avery. And, oh by the way, the Chiefs have a terrific running game.

So where, exactly, are Baldwin's looks coming from?

And it includes barbecue.

Hoorday for junk food Friday! As a Chiefs fan, you must support the team and participate. My junk food will be fried chicken. Mrs. Primetime never, ever lets me have it but, you know what, she works during the day so she'd have no idea that I'm eating fried chicken. Plus, she doesn't read the site regularly so she won't see this.

Also important: Andy Reid confirmed that barbecue is part of junk food Friday. No word on what kind...

8. Tyler Bray is tall. Chase Daniel is not.

Thanks to AP reader Ochophosphate for this picture, showing the height difference between Bray and Daniel. 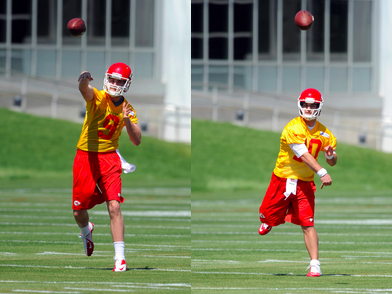 9. Video recap of day one

Courtesy of Bob Fescoe and Josh Klingler at 610 Sports. Those are football (practice) highlights!

Chiefs running the pistol? Not so much

Chiefs had a free agent visitor this week

Recap of day one at OTAs