The 2013 Arrowhead Pride NFL mock draft continues. AP user citadelchief is representing the Carolina Panthers with the No. 14 overall pick...

The Carolina Panthers have been moving in the right direction over the past couple of years. The drafting of Cam Newton in 2011 and Luke Kuechly in 2012 have given them an identity as well as leadership. From here, the Panthers can now focus on adding a supporting cast around their two centerpieces.

The Panthers have a lot of needs. At the start of the offseason, the Panthers needed OL and WR help. However, the additions of Ted Ginn and Domenik Hixon should alleviate the need at WR. That leaves OT and OG as their immediate focus on offense. At OT, Jordan Gross is old and Jeff Otah can't stay healthy. At OG...well, there isn't a lot to be excited about. Amani Silotulu has shown promise, but that's about it.

The defense came into the offseason in even worse shape. They need help at all three levels. The Panthers had a terrible run defense and is in desperate need of a run-stuffer at DT. The LB corps got a shot in the arm with Kuechly, but they have lost James Anderson and simply can't rely on Thomas Davis or Jon Beason to stay healthy. The secondary lost it's best player in Chris Gamble, but has added a serviceable temporary replacement in Drayton Florence. They also re-signed "Oh Captain, My Captain" Munnerlyn which is a solid retention move. But in no way, shape, or form should Haruki Nakamura be allowed to start for them this year.

So the Panthers need OT, OG, DT, LB, CB, and S help. No problem, just take the best guy right? Wrong. The best player available is Ezekiel Ansah, but the Panthers have a good DE tandem already. The OTs and OGs have been taken quickly, leaving only DJ Fluker as the only remaining first round talent along the offensive linemen, and he's only rated this high because Taylor Lewan and Jake Matthews returned for their senior years. DT shows a similar situation. Sylvester Williams is the next best available, but the big names are already gone. LB has some great talent available...if you're running a 3-4. CB does have a good option available with Xavier Rhodes. The same is true at S with Kenny Vaccaro.

So, given the board as it stands, it is narrowed to Sylvester Williams, Xavier Rhodes, and Kenny Vaccaro. 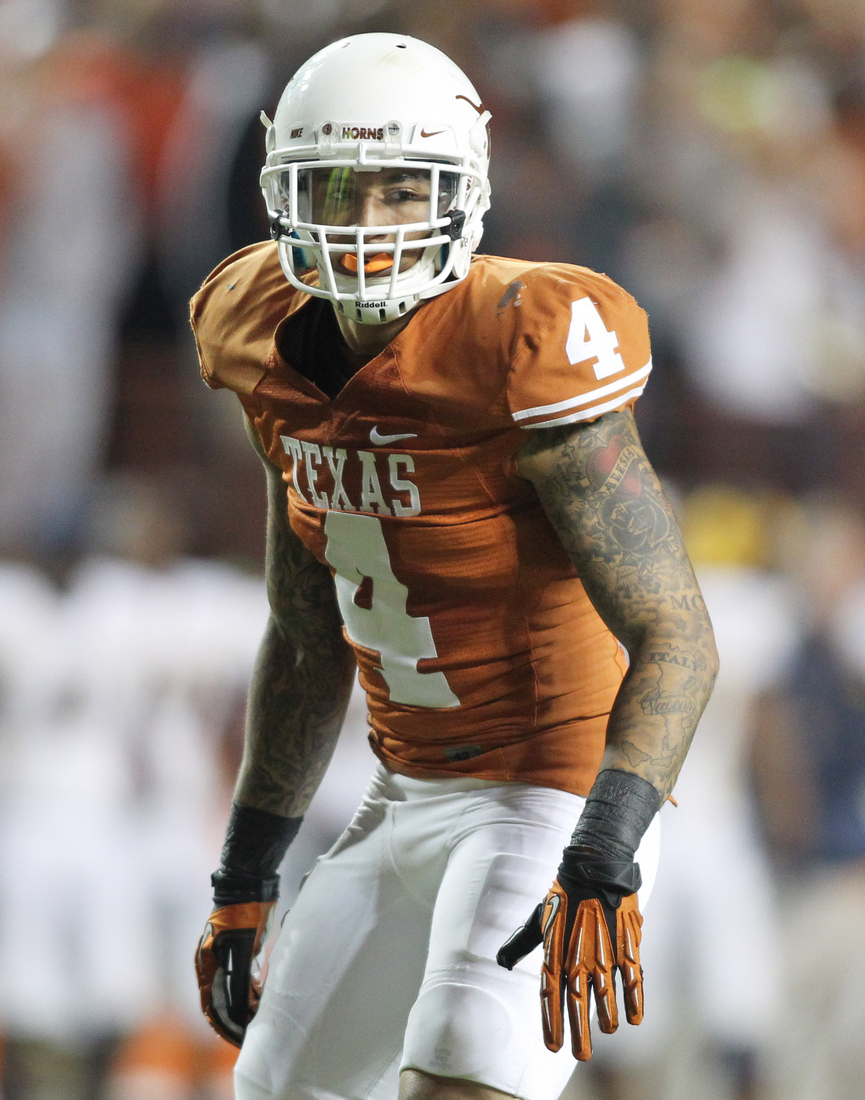 Yes, this is a little bit of a reach, but Vaccaro offers the most potential to both start and make an impact immediately. Sylvester Williams has talent, but needs work before he can handle NFL offensive linemen. Xavier Rhodes is a good option, but with Drayton Florence being added, there is a question as to whether or not Rhodes will make an immediate impact. Vaccaro gets on the field early and makes his presence felt.

Kenny Vaccaro is a very well-rounded player. He has the athleticism and speed to hang in coverage with WRs, the size and strength to handle TEs, and the aggressive nature to stick his nose in and make big hits in the run game. He's versatile enough to play FS or S which is huge for the Panthers.

The negatives on Vaccaro are his over-aggressiveness and run-ins with the law. He tends to look for the big hit too often. This leads to him losing his assignment in cutback lanes and makes him more susceptible to play-action. However, this is something that is coachable and shouldn't be too much of a problem. His run-ins with the law are the real reason he isn't valued higher. On multiple occasions he has been arrested. Once for a fight with another student and another instance for "failing to follow orders". However, he comes to a team that has some good leadership with Luke Kuechly. Plus, the Panthers still have their enforcer...Steve Smith, who just doesn't put up with punks.

This pick works well for the Panthers because Vaccaro is an immediate impact at a position of need. The Panthers are in a division that features Matt Ryan, Julio Jones, Tony Gonzalez, Roddy White, Drew Brees, Marques Colston, Jimmy Graham, Vincent Jackson, and Mike Williams. Having a secondary that can hold coverage long enough for the pass rushers to get after the QBs is going to be key if they want to be able to compete with that kind of offensive firepower.