The New York Jets are not a team without holes, to put it mildly. They haven't had as much luck rushing the passer in the last couple of seasons as they did early in Rex Ryan's tenure as head coach. They've been actively shopping Darrelle Revis this offseason, making it likely that they'll need to find a new cornerback or two at some point. They have huge question marks at wide receiver and running back, and division rival Miami just swiped their top tight end out from under them. The Jets' biggest need, though, is probably at quarterback. New York's QB situation last year was worse than any other in the NFL, save for maybe the Cardinals and Chiefs (and say what you will about John Skelton or Brady Quinn - at least they've never butt-fumbled in a game).

Genetics and the Law of Large Numbers would suggest than one or two of Antonio Cromartie's children would likely be pretty good at sports but, unfortunately for the Jets, Roger Goodell has outlawed child labor as part of his never-ending quest to ruin the game of football. As a result, New York will likely be forced to look elsewhere for the infusion of talent they so desperately need. They could use free agency to bolster their ranks, but money has been tight ever since Tim Tebow started insisting that the organization tithe 10 percent of their earnings to his church.

So the Jets will likely have to look to the draft to help fill the holes on their roster. Ideally I'd like to take a quarterback here, but both Geno Smith and Matt Barkley are off the board at this point, so the Jets might be wise to wait and see who's still on the board at the beginning of round two. Ezekiel Ansah is a tempting option, but New York's offensive woes are simply too great to ignore with this pick. Meanwhile, if New York is going to have any success moving the ball through the air or on the ground this year, they're going to need some help along the offensive line.

Make no mistake, this is not the dominant unit that bought Sanchez plenty of time in the pocket and opened up huge holes for the likes of Thomas Jones, Shonn Greene, and LaDanian Tomlinson on the way to back-to-back AFC Championship appearances just a few years ago. D'Brickashaw Ferguson and Nick Mangold are still contributing at a high level at left tackle and center, respectively, but long gone are former stalwarts like Alan Faneca and Damien Woody. Luckily for the Jets, Chance Warmack is still on the board. 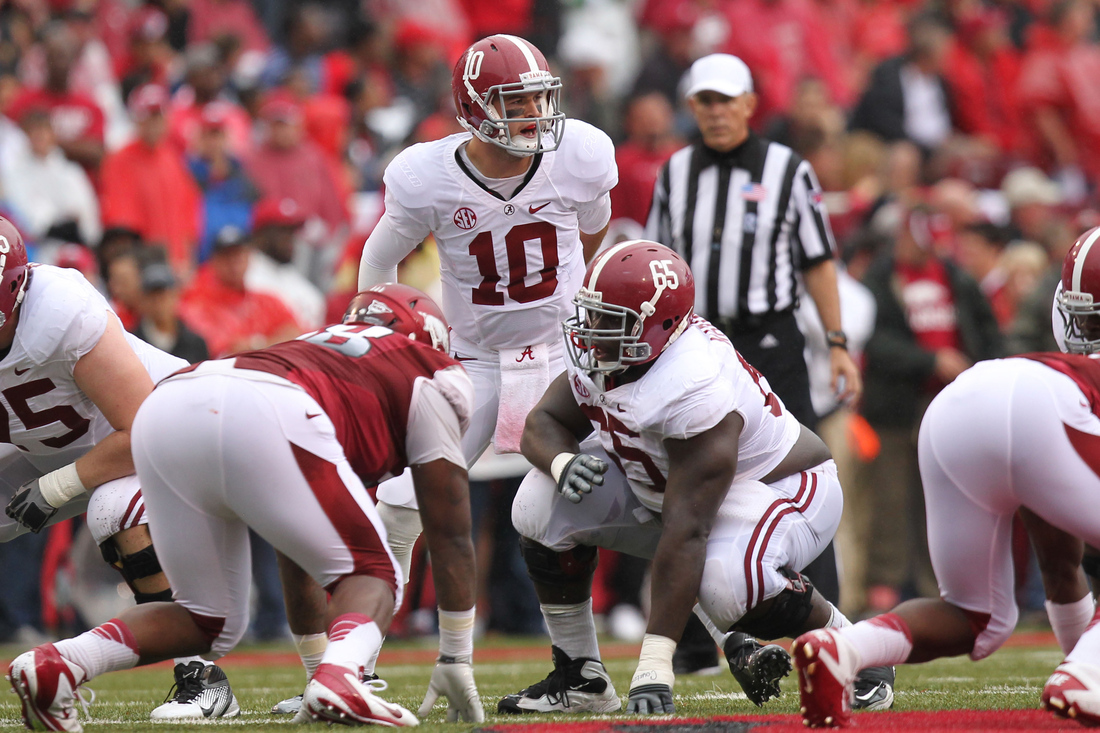 There are those who would argue that #9 overall is too high a pick to spend on a guard. But Warmack is arguably the best player available at what is inarguably a position of need. Some experts and draft gurus have Warmack rated as the top player in the draft - ahead of even fellow offensive linemen Luke Joeckel and Eric Fisher. Having a player like Warmack on the line should go a long way towards helping to both re-establish the Jets' formerly potent ground attack and providing extra time in the pocket for the Jets' somewhat less formerly potent air attack - both of which will be critical if the team is going to be moving forward with either Sanchez or David Garrard under center.

This pick isn't as sexy as taking a quarterback or, say, a picture of Rex Ryan's wife's feet. But it is the kind of pick that should make the rest of the surrounding pieces on the offense better and thus should pay dividends for years to come.