This is the part where we don't read too much into pre-draft visits. At least we try not to.

Share All sharing options for: Four of the top 2013 NFL Draft prospects aren't scheduled to visit the Kansas City Chiefs

The Kansas City Chiefs can have up to 30 pre-draft visits where an NFL Draft prospect would come to Kansas City to meet with team officials. Those visits aren't workouts -- the workouts are usually done on the team campuses -- they're just visits.

NFL Network's Albert Breer has a new story on his conversation with John Dorsey last week on the first day of the offseason program. Dorsey told Breer that the Chiefs were down to four options with the first pick. You gotta think at least a couple if not three or four of them are on this list: Luke Joeckel, Eric Fisher, Dion Jordan or Sharrif Floyd. All four of those guys were on the "national tour" that Andy Reid and John Dorsey took to look at potential No. 1 picks. There was one report that said Jordan was visiting the Chiefs but as I wondered back then it doesn't appear it was an actual visit to Kansas City.

Could it be a pass rusher? 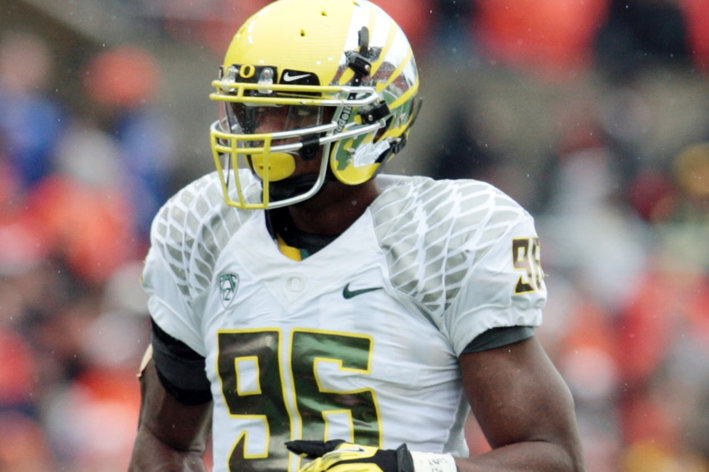 BJ Kissel: "Oregon would consistently put Jordan out in space like this. There'd be other plays where he's one of just three down-lineman being asked to get after the QB on a 3-man rush. This is the kind of versatility you'd be getting from having Jordan on the field and it's for this reason I believe Jordan would have a role on the Chiefs defense next season with Tamba Hali on the field also. Hali is strictly a pass-rusher and doesn't bring much else to the table in coverage or rush defense so if we're talking about adding another OLB and we want him on the field as a rookie, he's going to have to be able to bring another element to the defense."

Breer's report, which you should read, notes that Joeckel and Fisher will not visit Kansas City. And that Jordan and Floyd are not currently scheduled to visit the Chiefs.

Nope. doesn't mean anything. One of those four players is probably going to be the No. 1 pick, barring a trade down. It's pretty obvious to most people which players make up all or most of the final four.

What I've noticed with the guys that the Chiefs are bringing into their facility is that many of them have injury concerns -- they got hurt last season and are at some level in their rehab. Those visits are probably made so that the Chiefs medical staff can get the most up to date evaluation before the draft. Many of the players coming in for a visit have been late round prospects, not players you would have regularly heard of. Different GMs and coaches have different ways of doing things so the types of players the Chiefs brass brings into the facility is something we're learning.

Not visiting with the team doesn't mean they're in or out of the running. Maybe the Chiefs thought it was more important to use one of their 30 pre-draft visits on other players. Or maybe they're just messing with us, throwing out smoke screens and visiting with players just to make this hard to predict!

Here are our posts on all those workouts: