The 2013 Arrowhead Pride NFL mock draft continues. AP user SillyHatDay is representing the Arizona Cardinals with the No. 7 overall pick...

With the 7th overall pick in the 2013 NFL Draft, the Arizona Cardinals select ...

Barkley was the pick for me all along, even if Geno Smith been on the board. I never had Smith moving ahead of Barkley, though it was close in the middle of this past season. Barkley is, in my eyes, the superior QB, and a franchise caliber guy. Let me justify. 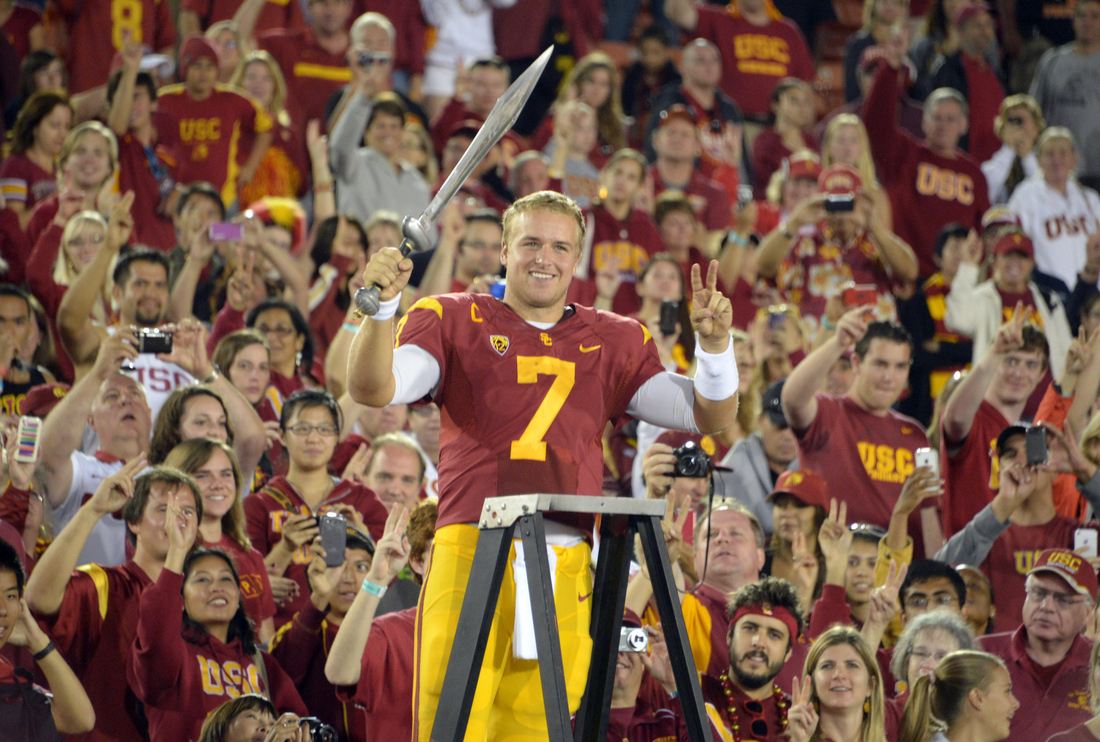 The meme of Barkley's terrible senior season is a contrivance. He went 7-4 that season, for a 63 percent win percentage. The individual state line is nice too: 64 percent comp, 8.5 avg., and 36 TDs to 15 INTs. Those are nice numbers for a "bad" season. Maybe it was underwhelming relative to his insane junior campaign, but it was still above average on its own. Barkley outperformed Geno Smith (54 win percentage), and Tyler Wilson, who was destroyed weekly ... yet we hear little of any bad season on their part.

Win or lose, USC's offense scored right at 34 points. That tells you that Barkley played good enough to win regardless of the outcome. He was a steady, consistent player. Geno Smith's video game numbers fell off a cliff once competition got tough. His offense scored 50 points in victories, yet only half that (27) in losses. I have no doubt who can stand up to NFL defenses. Barkley beat NFL analogues for four years in the Pac-12.

Physically, he's average, but that's just fine. Brees has a below average arm, while the brothers Manning possess median arm strength. He's an average, but willing scrambler. Again better than plenty of NFL elites. He excels where it matters though. He's smart, which you can see with his complex reads, audibles, and progressions. It doesn't matter if your 6'5 QB can throw a football through a brick wall if he can't read a defense or find a moving target at NFL speed. Barkley can.

Geno Smith often fell apart in losses, like K-State. If an easy victory was not apparent, Smith was in dismay, such as his bowl game. Conversely, some of Barkley's losses were his most gritty performances. Against Oregon, Arizona, and UCLA, he showed the ability to keep battling back to keep the game in reach. Had he had a less leaky defense, or more time on the clock, he may have won all of them. The loss to UCLA is illustrative. USC was down 24-0, in part due to early mistakes by Barkley. But Barkley battled back to within three. The USC defense laid down for UCLA again, and Barkley was eliminated from the game before he could come back again.

In sum, Barkley is a gritty, tough player who keeps swinging with his back against the wall. You can count on him to come through for you in a brawl. He is a smart, accurate gamer, with the experience to come in and compete against NFL defenses day one.. Arizona finally has its franchise QB.