KC Chiefs NFL Draft grades: Not perfect, but not failing either!

The Kansas City Chiefs 2013 NFL Draft class is in and so are the NFL Draft grades (at least some of them). I rounded up a few of the draft grades floating around out there. The Chiefs are right in the middle -- no As and no Fs. So that's ... OK? I don't know. I remember saying I thought the Seahawks 2012 draft class wasn't very good ... and then it was very awesome. I know what they mean. Let us know what you think of draft grades in the comments.

Share All sharing options for: KC Chiefs NFL Draft grades: Not perfect, but not failing either!

Audibles - Chris Burke of SI.com
The Chiefs could not go wrong choosing between OT Eric Fisher and Joeckel at No. 1. They might have gone wrong after that, depending on how well TE Travis Kelce walks the straight and narrow or when RB Knile Davis can contribute. CB Sanders Commings could win playing time, and I actually think seventh-round pick DE Mike Catapano will stick on this roster. GRADE: B

11 things we learned about the Chiefs draft class 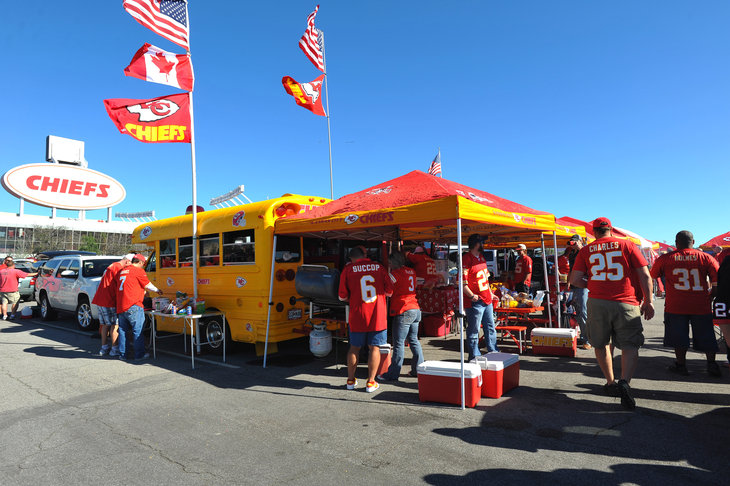 Eight new draft picks and even more undrafted free agent signings, the Chiefs are turning over their roster with new players. Check out what we know about the new guys.

McClain’s complete NFL Draft grades - Houston Chronicle
Andy Reid made Fisher the first pick in the draft. He should start for 10 years and earn a lot of Pro Bowl votes. Kelce might win a starting job as a rookie, but he won’t make anyone forget Tony Gonzalez. Davis will compete for playing time behind Jamaal Charles. GRADE: B

Ira Kaufman's NFL Draft grades | TBO.com
A 2-14 club needs help everywhere and this weekend was a good start for new coach Andy Reid. Eric Fisher could be a 10-year starter at LT and TE Travis Kelce has a chance to develop into a reliable target for QB Alex Smith. Fourth-round pick Nico Johnson is an intriguing ILB prospect from Alabama. GRADE: B

Mel Kiper gives out grades to every NFL team after the draft - ESPN
Travis Kelce is a good tight end, but they already have Tony Moeaki and Anthony Fasano on the roster. And Knile Davis is explosive, but he's not a steal in Round 3, and has had both injury and fumble problems. I like the next two picks, however. Nico Johnson can start as an inside linebacker, and Sanders Commings provides some corner depth. GRADE: B

Kansas City Star:Team-by-team NFL Draft recaps and grades
The way quarterbacks slipped in the draft validated the trade of a second-round pick for Alex Smith. Johnson can make it Johnson and (Derrick) Johnson at ILB. Kelce, Davis, Commings and Wilson will fill roles, and Kush is insurance for Rodney Hudson, who is coming off a broken leg. But this draft will be defined by the performance of Fisher. GRADE: B-

Don't like instant? Here are grades, like 'em or not - CBSSports.com
Best pick: I love the choice of third-round tight end Travis Kelce. He might be the most talented tight end in this draft. He can catch and block. Nice choice.
Questionable move: Taking Arkansas running back Knile Davis in the third round. He's had a lot of injury concerns. If he can stay healthy, he'll be the backup. GRADE: B- 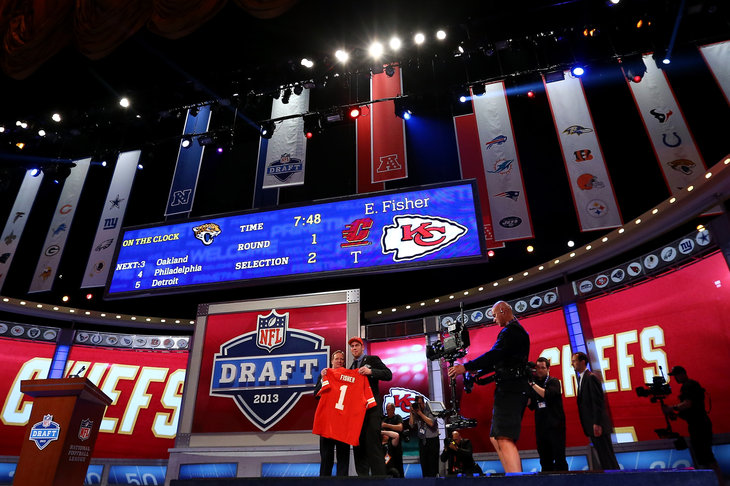 How did the Chiefs do in the 2013 NFL Draft? Check out what a few thousand Chiefs fans had to say.

Draft grades - Rob Rang of CBSSports
While Fisher is safe, tight end Travis Kelce and running back Knile Davis are definite gambles on upside, though each could pay off significantly. Of the Chiefs' third-day picks, I like the physicality and size of defensive back Sanders Commings and linebacker Nico Johnson. This is a solid class, overall, but, frankly, I would've taken Joeckel with the first pick and thought that the Chiefs gambled too much on upside throughout much of the rest of their draft. GRADE: C

AFC Draft Grades - Evan Silva of Rotoworld
Selecting workout warrior running back Davis over Johnathan Franklin was one of the worst picks of the 2013 draft. If Davis' college tape means anything for his NFL future -- and I believe it does -- he won't be long for the league. Johnson is a two-down role player and special teamer at best. Commings has been billed as a physical press corner, but I watched his tape and found him to be allergic to contact. The Catapano pick offered late-round value, but otherwise I was unimpressed by this eight-man haul. GRADE: C-

Tyler Bray to the Chiefs

Vols fans: Do you want your team to draft Tyler Bray?

One impressive fact about UDFAs