It was Central Michigan OT Eric Fisher in round 1, Cincinnati TE Travis Kelce and Arkansas RB Knile Davis in round three and now in round four it's Alabama inside linebacker Nico Johnson.

The KC Chiefs new player is Nico Johnson, a 6'2', 248-pound inside linebacker from the national champion Alabama Crimson Tide. Johnson fills an obvious need at inside linebacker for the Chiefs. This is the first pick where I really felt the Chiefs identified a need with the pick.

Johnson is the 79th rated player in the NFL Draft, according to Mocking The Draft. He was projected as a 4th-5th round pick. The Chiefs visited Alabama this offseason so it's possible they met with Johnson at some point. Johnson ran a 4.65 40-yard dash at the 2013 NFL Combine. You can follow Johnson on Twitter at @JOHNSON35BOY. 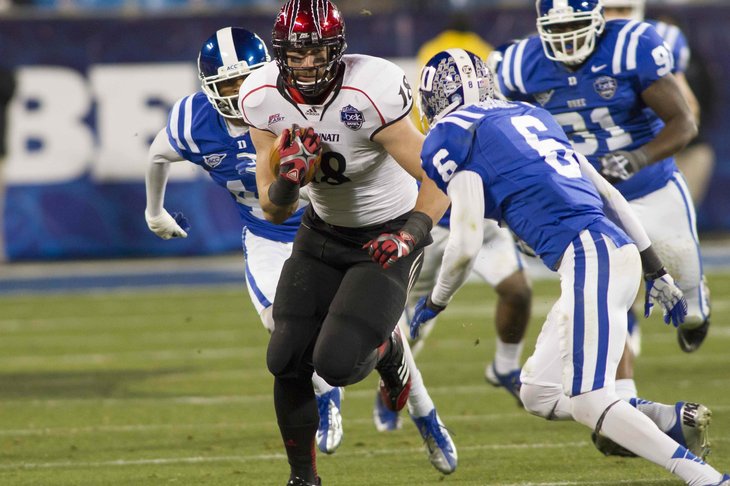 Rob Rang of NFL Draft Scout writes: "On tape, Alabama's Nico Johnson is one of this year's stoutest run defenders. The 6-2, 249 pound sledge hammer seems to enjoy taking on and shedding blocks and is an aggressive, drag-down tackler. He's also a player who scouts expect to work out well, though this athleticism doesn't always translate onto the field in coverage."

AL.com has a great profile of Johnson, where he says he won't be watching the NFL Draft this year:

Johnson, a three-year starter who finished third on the team with 55 tackles in 2012, is projected as a mid- to late-round selection. His path to this point has been longer than most, as he played through pain at the Senior Bowl, underwent surgery to repair a sports hernia, attended but was forced to sit out February's NFL Combine and participated at less than 100 percent at Alabama's first Pro Day in March.

The Chiefs entered the draft with a number of holes and kicked things off by selecting Central Michigan's Eric Fisher No. 1 overall. From there the Chiefs moved to the third round -- they didn't have a second round pick due to the Alex Smith trade with the San Francisco 49ers. In the top of the third round, they picked Cincinnati TE Travis Kelce (No. 63) and at the end of the third round they selected Arkansas RB Knile Davis.

Chiefs GM John Dorsey will address the media following the conclusion of the seventh round.

4th round picks on the Chiefs roster:

Grade the Chiefs draft through 3 rounds

8 facts about the Chiefs No. 1 pick