The Kansas City Chiefs used the No. 63 overall pick in the 2013 NFL Draft on a tight end out of Cincinnati named Travis Kelce. Who is Kelce and how does he fit in Kansas City? Read on for 5 things you should know about the Chiefs new tight end. Make sure you vote in our Travis Kelce approval poll.

1. The second Kelce to play for Andy Reid

Travis has a brother named Jason who was a 2011 sixth round pick by the Eagles. Yes, those Eagles. Andy Reid knew Travis from when he would visit his brother in Philly and Reid's son is at Temple and they would play Cincinnati every season. So he's familiar with him.

The Chiefs are getting a steal right now!!!!

"That he was great guy," Travis said when asked what his brother said about Andy Reid, "and a great coach and that he is going to hold you accountable and I love that about coaches. I'm more than happy and more than fortunate enough to have a guy like Coach Reid ahead of us and kind of coach me up and get me going in the right direction."

2. Kelce used to be a quarterback

Kelce arrived on campus at Cincinnati and made his first impact as a quarterback. In 2009, he saw action as a quarterback, carrying the ball from the Wildcat but not passing it.

OK, to say he was a quarterback at Cincinnati as in "someone who throws the ball" is a stretch. He didn't do that. But he was rated the 54th best pro-style quarterback coming out of high school, where he was a three-sport star.

"We had an awesome quarterback at the time in Zach Collaros and we needed some help in the run game as well as the passing game," Kelce said, "so I talked to coach Butch Jones, who was my coach at the time, and he said we need a tight end and my skill-set, athleticism and my direction all transferred over and it worked out perfect for me." 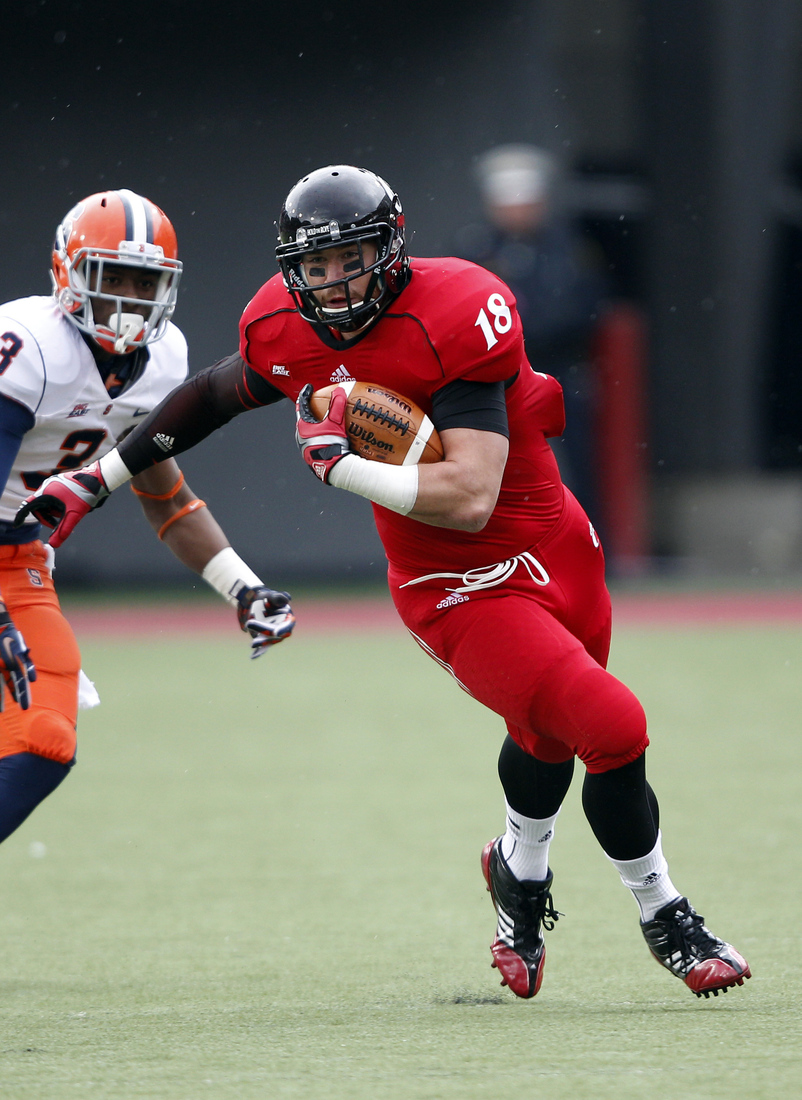 3. Kelce was suspended for smokin' the weed

Whew! I thought he was gonna be suspended for using a real drug.

I have few problems with players (or anyone for that matter) smoking pot. What I do have a problem with is players smoking pot when they know they're gonna get drug tested. You're either too stupid or too immature at that point; the Chiefs are betting on the latter with Kelce.

Credit to Kelce, he came right out and addressed it.

"It was a suspended drug test for marijuana, it was a one-time thing," he said on Friday night. "I haven't touched it since. I am a guy that is a clean-cut guy and I'm going to give the organization everything I can and that's that."

I'm a little brother. Yes, we can be a little ornery.

"I know he mentioned to you about the marijuana testing that he had a couple of years ago when he tested positive, and I believe he's put that behind him and he'll be the first to tell you it was an immature move that he made," Reid said. "He's worked hard at doing the right things and has had a tremendous career."

"In college I think that sometimes kids make youthful mistakes at times," GM John Dorsey said. "I think he has learned from his mistakes and has moved on and matured from it, and everybody gets a strike in life."

Impressive list of players, no? The Gronk comparison comes from NFL.com and Witten comes from the Chiefs bio on him, citing analysts.

"I've heard a lot of comparisons," Kelce said, "I would like to think I'm a different breed of player, someone that can get after a guy in the run game, but at the same time catch a ball and go 80 to the house. I think the Chiefs are going to get someone who is very versatile and if I had to possibly choose one guy, I would choose Jeremy Shockey just the way he plays with passion and energy. I think that would be an awesome comparison."

Reactions: 'Kelce is a stud!'

"I had another tight end who I thought was pretty good from the University of Cincinnati in (Brent) Celek," Reid said. "Brent was a tough kid just like Travis is, I think you'll see that. Very good receiver, good enough in line to be able to block and do a respectable job there. You'll see a lot of emotion and toughness with him."

Reid said Kelce plays with similar emotion as Shockey, showing that during the game. 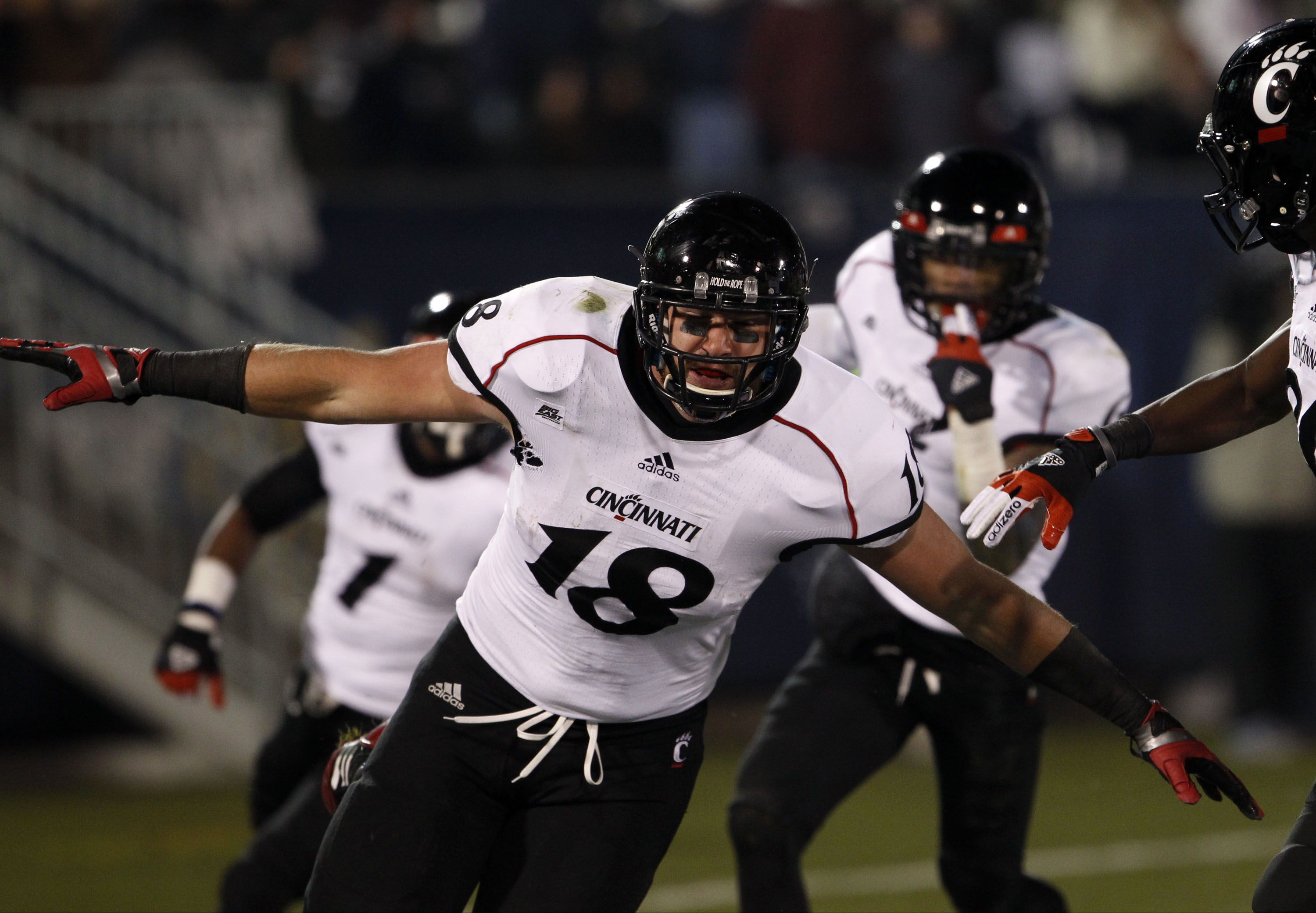 5. Where does he fit in Kansas City?

The top two tight ends at the moment are Tony Moeaki and Anthony Fasano. Methinks this draft pick is not good news for Moeaki.

Reid said Kelce can play in multiple positions. He can stay in line and block. He can move out as a receiver, where he's a threat. He said Cincinnati moved him "all around".

But I don't see how three tight ends get playing time.

"I think the important thing, and you haven't known me a long time, I try to bring in competition," Reid said. "I think that brings out the best in everybody and that's what we are attempting to do."

Everyone coach says that. And remember, as I've said, what coaches say matters very little. It's their actions that matter. The actions that we know are that Fasano has a multi-year contract, Kelce is a third round pick and Moeaki is entering the final year of his deal.

Who's the odd man out there?