NFL Draft results: Knile Davis to the KC Chiefs in 3rd round

Share All sharing options for: NFL Draft results: Knile Davis to the KC Chiefs in 3rd round

Davis ran a 4.37 40-yard dash at the 2013 NFL Combine and benched 225 pounds an impressive 31 times. The Big Lead breaks down how that performance stacks up to other running backs.

The Chiefs used their No. 1 overall pick on offensive tackle Eric Fisher out of Central Michigan, which many people expected. He will likely play on the right side if Branden Albert remains on the team and the left side if Albert is gone. The Chiefs 2013 second round is in San Francisco (which the 49ers later traded) for the Alex Smith trade. Tight Travis Kelce out of Cincinnati was the Chiefs first pick of the third round. Kelce is a solid blocking tight end who should team with Anthony Fasano (and should make Tony Moeaki slightly worried).

Meet the other new Chiefs 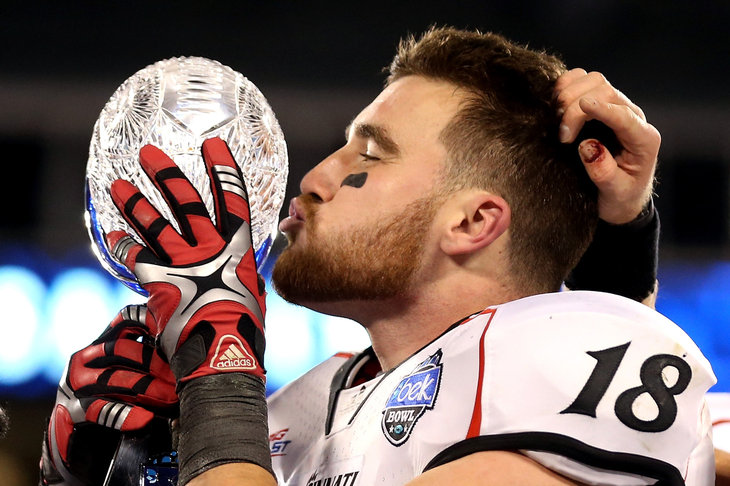 Mocking The Draft: As a pass blocker, Fisher is patient. He lets the defender come to him and then likes to drive around the corner and out of the play. Because he has fast movement skills, Fisher can wait a tick in case he has to move to his right on an inside rush. Knows when to let the guard take a defender so he can stay outside and block a late rusher.
Nick Jacobs: "Kelce is a mismatch for most defenses. Cincy used him as an motioning H-Back, they used him at tight end, the split him out at receiver. Kelce has serious wheels; he is a big body that can break tackles. And just like Fisher, he has the mean streak when he blocks and I love it."