Eric Fisher was picked No. 1 overall, which means he will soon be a rich man.

I'm a sap for two things in the NFL Draft.

First, the phone call. The call from the team to the player, telling them they've been picked in the NFL Draft. The best one so far this year is Justin Pugh, who had his buddies pile on top of him in this video after he was picked. Here's the phone call from the Chiefs to Eric Fisher. 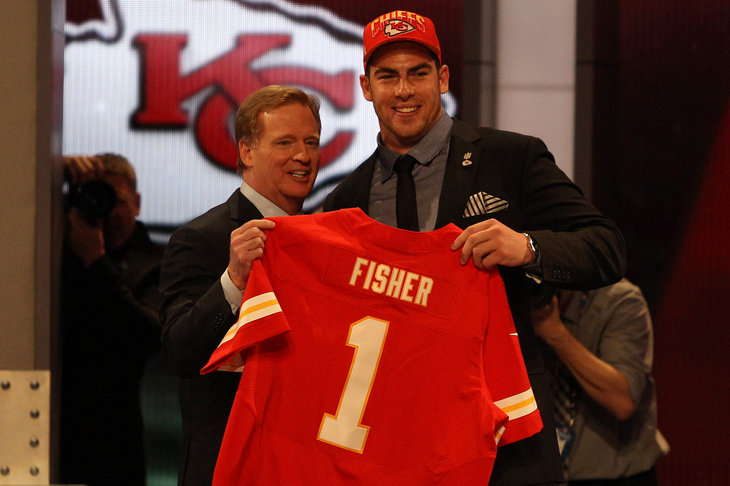 Second, when athletes say they're going to buy their parents a house. I know, I know. A lot of athletes say this. But it's really, really cool because no one but their own family truly knows how much work went into this.

Fisher said last night that his Mother, who has worked in the warranty department at Volkswagen for 33 years, can now retire.

"My mom raised me for the most part," Fisher said last night. "She supported me in everything I did. My mom never handed me anything, my mom told me that if I want something in life, I'm going to have to go out there and get it. I am so blessed that she had that attitude with me because it all paid off in the end and now I can pay the favor back."

After I grew up, I paid my parents back by picking up the tab at a dinner at Waldo Pizza. Fisher sends his Mom into retirement once he signs his contract, which will be worth over $20 million.

"My life is about to change, but the person I am, I'm not changing for anything," Fisher said. "I am who I am for a reason and I take pride in being the person I am. I'm a Kansas City Chief now."

Make sure you read Sam Mellinger's story on Fisher and his mother. It's a good one.

Grade the Chiefs No. 1 pick

Chiefs explain why Fisher was the pick