Meet the No. 1 pick in the 2013 NFL Draft, Eric Fisher, offensive tackle out of Central Michigan, and now the Kansas City Chiefs new lineman.

With the first pick in the 2013 NFL Draft, the Kansas City Chiefs have selected Central Michigan offensive tackle Eric Fisher, the highest a player from the MAC (or Central Michigan) has ever been selected. Fisher becomes the 13th offensive lineman taken in the first round in KC Chiefs draft history.

Where Fisher fits on the offensive line next season depends on the Branden Albert trade rumors circulating. If Albert is not in Kansas City then Fisher is your left tackle. If the Chiefs don't trade Albert, who says he he is a left and not a right tackle, then there will be an interesting situation brewing.

What does this mean for Albert? 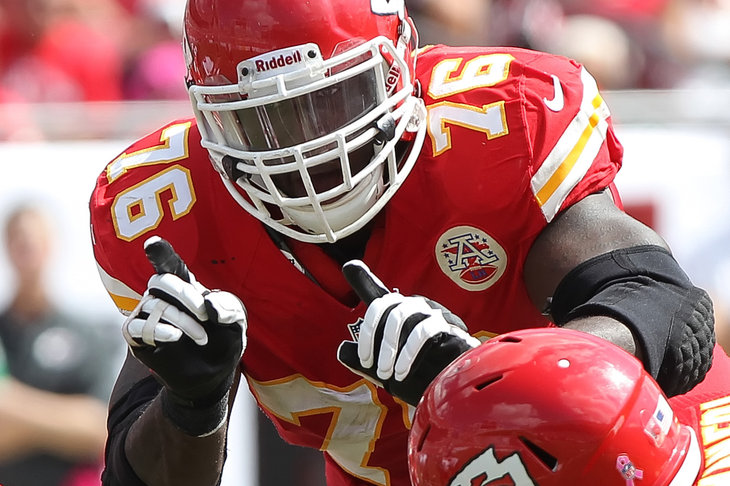 The debate with the No. 1 pick was between Fisher and Texas A&M's Luke Joeckel. For the majority of the time, Joeckel seemed like the favorite. That is until several reports, including Mike Mayock's mock draft and then Jay Glazer, began to connect Fisher to the Chiefs. By Thursday afternoon it became apparent that Fisher had a very good chance of being the No. 1 overall pick in the 2013 NFL Draft.

The Chiefs did entertain trade offers for the pick but ultimately decided to keep it, making Fisher their new offensive tackle.

These are the results of our most recent Fisher vs. Joeckel poll: 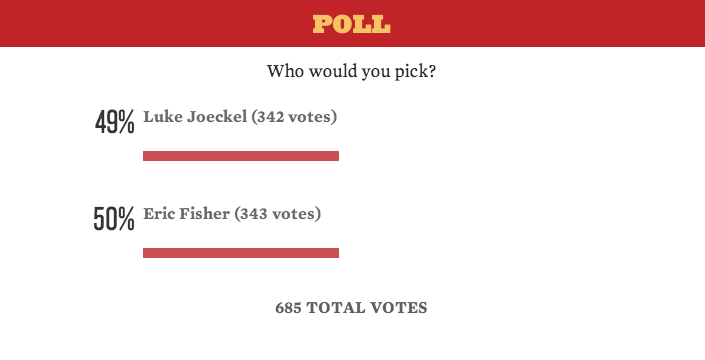 How did Fisher go from the MAC to No. 1 pick?

Check out the Rivals profile for that two-star (!!) recruit Eric Fisher.

Before the 2013 NFL Combine at the end of February, Fisher was not widely considered one of the top picks.

"Following the season, Fisher took full advantage of the all-star game and NFL Combine process," Kadar writes. "No player arguably had a better Senior Bowl than Fisher. According to reports, he routinely was the best player on the field. At the combine, Fisher proved his athleticism while measuring in at a legit 6-foot-7."

Hustle Belt, our MAC blog, writes of Fisher's "relative inexperience" in their scouting report: "He only started in 65 percent of his career games at CMU and really didn't start to separate himself as a potential top-tier pick until late in his senior season. But with his natural skills and a frame that has the ability to add more solid weight while maintaining his athleticism, Fisher is full of tremendous upside."

In his final mock draft, Kadar sent Fisher to the Chiefs with the top pick.

Kadar ranked Fisher No. 4 on his final top 200 players big board.

As a pass blocker, Fisher is patient. He lets the defender come to him and then likes to drive around the corner and out of the play. Because he has fast movement skills, Fisher can wait a tick in case he has to move to his right on an inside rush. Knows when to let the guard take a defender so he can stay outside and block a late rusher.

The entire first round draft order.

Chiefs first round picks since 1960, by position