2013 NFL mock draft: The 1st round, according to Arrowhead Pride readers

Share All sharing options for: 2013 NFL mock draft: The 1st round, according to Arrowhead Pride readers

The AP mock draft is now complete. From the Kansas City Chiefs to the Baltimore Ravens, all 32 picks have been made. A big round of applause to everyone who participated. This was a lot of fun. We did two rounds in the past but I think one was just right.

The pick we care about -- the Chiefs -- was posted way back on April 1. The choice then by AP user R2J_24 was Texas A&M's Luke Joeckel and if we did the mock draft again today it would probably be the same pick. All signs continue to point to the KC Chiefs selecting one of the top two left tackles, Joeckel or Central Michigan's Eric Fisher. 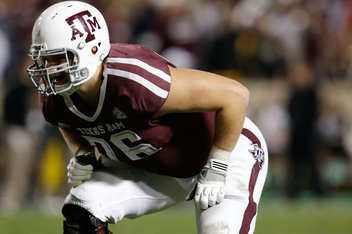 Geno Smith went all the way at No. 2 with GenericBrand repping the Jags. That's one of those picks that would be lower if it were done today, at least going by the buzz around Smith these days.

Oklahoma's Lane Johnson went 12th to the Dolphins, which was a popular pick three weeks ago. Today, Johnson is regularly mocked in the top five. Ziggy Ansah went 17th to the Steelers and today I could see him going in the top five.

Let us know in the comments what you think is the best value pick and the biggest reach. For value, I'll say DJ Fluker going 30th to the Falcons by bradelli58. For reach, ArrowDread sending Keenan Allen to the BIlls with the No. 8 pick.

Here's the whole thing with links to each write-up. Great work everyone!