NFL Network's Mike Mayock doesn't release a new NFL mock draft each week. Instead he waits to the end and releases one of them. Take a look at Mayock's mock below, and see who he has the KC Chiefs taking No. 1 overall.

Mayock does NOT send Luke Joeckel to Kansas City in his 2013 NFL mock draft. He opts for Central Michigan's Eric Fisher. Mayock writes of Fisher: "I think he's got more upside than Luke Joeckel, and I think there's very minimal downside. You can plug-and-play him for the next 10 years and you've got a potential All-Pro tackle."

The hype has been centered mostly on Luke Joeckel. That's the favorite, according to the oddsmakers. But look what's happened in the last day or so.

Mayock released his mock draft which has Fisher going to the Chiefs. Mayock is one of the best in the draft business. Jay Glazer, the NFL's best information man, thinks the Chiefs will take Fisher. 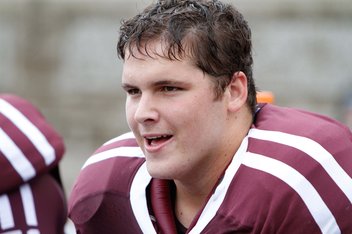 And then Adam Teicher of the KC Star has consistently mocked Fisher to Kansas City. Albert Breer and Ian Rapoport, both of NFL Network, think the Chiefs are going with Fisher.

Missing from that list is ESPN's Mel Kiper and Todd McShay, who both send Joeckel to KC, as does SI's Peter King.

Lots of credible folks are predicting Fisher to the Chiefs. It has me looking hard at my prediction that the Chiefs will take Joeckel. What do Mayock, Glazer and others know that has them selecting Fisher over Joeckel? I'm thinking we need to be prepared for the Chiefs selecting Eric Fisher No. 1 overall. Maybe it was just me, but I was focused way more on Joeckel.

I will say that I'm really enjoying the mystery around the No. 1 pick.

Other observations from Mayock's mock:

-Three tackles going in the top four picks. That seems to be the thing these days. I'd like to be where the Raiders or Eagles are at with teams who need a tackle wanting to move up.

-Here's a new one: Geno Smith to the Browns. Dang.

-Star Lotulelei drops all the way to No. 18. The Cowboys.

Mayock's complete mock can be seen at NFL.com.

The latest on Albert: the hold-up is draft picks

Scouting the scouts in the draft