The Branden Albert saga continues. The latest report states that the Kansas City Chiefs and Miami Dolphins have resumed trade talks regarding Albert. Previously it was reported the two sides had stopped talking.

Earlier this week a Yahoo! Sports report said that Albert will have to drop his price tag if the Dolphins are going to trade for him. Later a conflicting report surfaced and stated that the Dolphins are balking at Albert's price, and that they're willing to pay him if the Dolphins can agree on trade terms with the Chiefs. 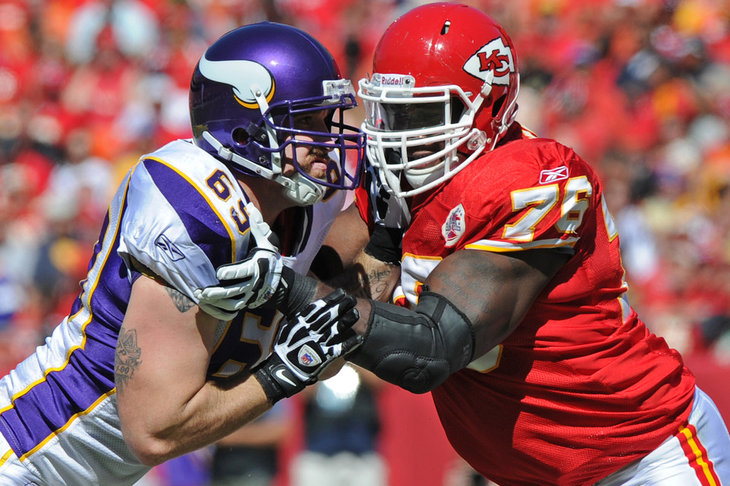 The latest news on Albert comes via ESPN's Ed Werder, who reported on SportsCenter that the two sides had resumed talks surrounding Albert. That's certainly good news for a trade. Considering the conflicting reports stated above, we have no idea where the two sides stand on a potential trade.

Are the negotiations over how much the Dolphins would pay Albert in a long-term deal? His agent does have permission to speak with Miami. Or does the disagreement come from the which pick the Dolphins would give up in a trade? If the deal is coming down to a second round pick, we know most KC Chiefs fans would pull the trigger.

If the Chiefs take Luke Joeckel or Eric Fisher No. 1 overall, it won't be to play RT whether Branden Albert traded or not. Nobody does that

Except the Rams who took Jason Smith No. 2 overall in 2009. It's not like playing the No. 1 pick at right tackle for a season is unheard of. It can definitely happen.

Adam Schefter says the deal is almost assuredly going to get done:

As @edwerderespn reported, Chiefs-Dolphins resumed trade talks for Branden Albert. This is like Revis deal: has to happen.

Meanwhile, in Joeckel vs. Fisher...

As we get closer to draft, hearing more that if Chiefs cant deal Branden Albert, then Eric Fisher will be 1st overall pick ...

Have the Chiefs really not decided yet who they'll take? I hope the future of Branden Albert, who will probably be on the team for one more at the most, isn't a major factor in this. Albert is clearly on his way out. If he's not part of the future, he shouldn't be a significant factor in who the Chiefs choose No. 1 overall.

Here's what I don't understand about the Dolphins: Why would they let Jake Long walk and then turn around and pay Albert similar money AND give up a second round pick? Are they getting desperate? Something doesn't add up here.

Albert's price tag needs to come down ... no it doesn't

Dolphins have permission to speak with Albert

Poll results: Would you trade Albert for a second round pick?