2013 NFL Draft: What Luke Joeckel can do the for the Kansas City Chiefs

Guest post by Cian Fahey, who covers the NFL at PreSnapReads.com. Follow @cianaf for more from Cian.

Share All sharing options for: 2013 NFL Draft: What Luke Joeckel can do the for the Kansas City Chiefs

In seven days, NFL Commissioner Roger Goodell will step towards the podium at Radio City Music Hall in New York to announce that the Kansas City Chiefs will draft....

And that is where the story ends for now.

For the first time in years, it is very unclear who will be the top prospect taken in the NFL draft. For much of the off-season, Texas A&M's left tackle Luke Joeckel was the presumed choice for the Chiefs, but for some he was supplanted by Central Michigan left tackle Eric Fisher as the post-season evaluations were carried out. The ambiguity is so dense that one or two analysts believe that Oregon linebacker Dion Jordan could surprise everyone by being Andy Reid's top option. 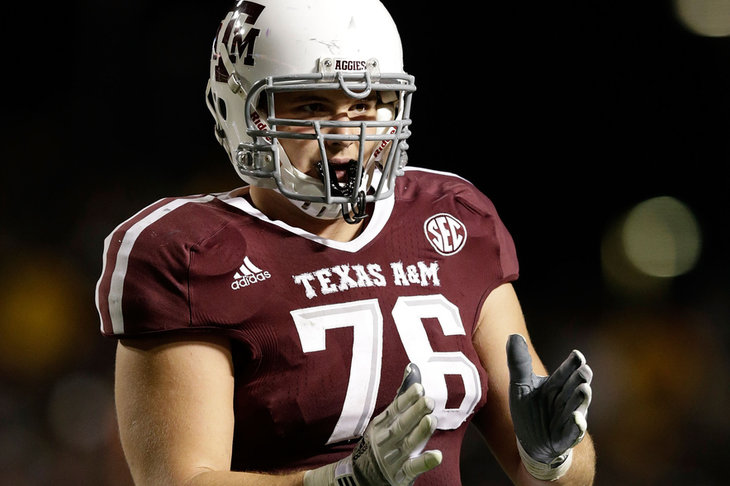 Check out the Joeckel vs. Fisher poll results, where the draft's top two tackles are in a dead heat.

Even though we still don't know for sure, Joeckel remains the favorite. Even if the Chiefs don't draft him and take Eric Fisher, much of the impact will be the same. However, for this feature, we are going to look at Joeckel in particular and see what he can bring to the Chiefs' in both the short and long-term.

According to esteemed NFL draft analyst Eric Stoner, Joeckel is an excellent prospect both as a pass-protector and a run-blocker. However, while his pass-blocking should be excellent from day one, his ability to be a dominant run-blocker will take some time to develop. That means he is almost a perfect fit for what Andy Reid wants to do in the short-term.

Although the Chiefs have an exciting, and relatively young, running-back in Jamaal Charles, one of Andy Reid's strongest traits as of late has been his ability to ignore his own backs. LeSean McCoy is about on the same level of Charles and he wasn't the focal point in Reid's offense last year, despite finishing the year with 254 total touches in just 12 games.

What Reid's offense does do well however is help the quarterback position with a well-designed passing attack. Much like Jason Peters was in 2011 for Reid's Eagles, Joeckel could become a very important piece of both the passing and rushing attack in Kansas City.

Throughout his whole career, Reid has valued athleticism in his left tackles. Whether it be Tra Thomas or Jason Peters, the position has always carried a lot of value for Reid. When you watch his offense, it is easy to see why. The value of the left tackle position has heightened in the contemporary NFL era, but that is solely because of it's worth in the passing game. Reid makes use of his left tackle as run blockers also.

One of the Reid's offensive staples is the screen pass. With running-backs such as Brian Westbrook and LeSean McCoy in his past, it's easy to see why, but running screens requires very athletic offensive linemen who can play in space.

When healthy, Peters was not only one of the most athletic left tackles in the league but also one of the most athletic offensive linemen in the NFL. During his last season prior to tearing his Achilles in Philadelphia, Peters showed off that outstanding athleticism, but also showed off his incredible ability to sell the initial fake, locate different types of defenders in space, before making the impact block that often resulted in a big gain.

On this play, Peters stands up at the line of scrimmage as a Cowboys' blitz blows by him. After a moment, he steps sideways before sprinting down the field and locating Sean Lee in space. The play is a perfectly timed bubble screen to tight end Clay Harbor with Peters and LeSean McCoy as the lead blockers.

Even though Peters had to sell the fake and accelerate from there, he was still in position as quickly as McCoy was and was able to knock Lee to the ground with his body control and strength.

On this second screen play, Peters lines up at left tackle with Jeremy Maclin as the only receiver outside of him and no tight end support. He stuns Demarcus Ware with a hit initially, before seeping out into the flat and sprinting towards Jeremy Maclin.

Maclin works back to the ball on another excellently designed play to give Peters time to get into position. Even though Maclin had to work back to catch the ball, Peters arrives almost at the same time as the ball and is already chasing down Mike Jenkins. Jenkins has no hope against Peters in a strength battle, but he is unable to avoid him with his agility either.

Peters springs Maclin on the first step towards an easy touchdown.

Outside of those teams running zone blocking schemes, every team in the NFL will ask their offensive linemen to travel onto the second level of the defense to create long runs. However, most teams look to their guards and centers to do this, opposed to their tackles.

Even those that do let their tackles move onto linebackers and safeties, more often than not they limit the majority of those plays to their right tackle. In an Andy Reid offense, that is not the case. At least, it's not the case when he has a left tackle capable of carrying out that role.

Just like in the screen game, getting to the second level as a run-blocker isn't just about athleticism. Most second-level blocks include an initial chip or sustained block to prevent a defender shooting into the backfield. In the above play, Peters helped his center to knock the nose tackle onto his right shoulder, before moving onto the second level to locate the incoming linebacker.

The second play shows this more clearly as he carries out the role in space.

On the left side, where Peters is circled, the ball has just been snapped. Peters had a defender lined up directly over him from the start of the play. Peters used his arms to knock the defender back, who absorbed the hit and set his feet to react to another attempted block.

However, when the defender dropped his weight onto his back-feet to battle Peters with his hands, Peters was already moving past him down the field. In Peters' place arrived Clay Harbor. Harbor was able to maintain the block against the much bigger defensive linemen because he was still looking to where Peters had gone and had his weight dragging him away from the ball.

Meanwhile, on the right side of the image, Peters was already in the perfect position to block the incoming safety and extend the lane for his running-back.

Reid's offense runs a lot of traps. Traps are designed to confuse defensive linemen and allow blockers to use their momentum towards the quarterback against them on running-plays. It also requires an athletic group of offensive linemen who can move laterally in space.

Trapping defenders are more often going to be guards, tight ends and fullbacks, but the rest of the offensive line must still play a role.

On the two above plays, Peters does the same thing after players inside of him look to trap defenders. He uses his bulk to come down and push the defensive tackles out of the play. This requires power, technique and most importantly, excellent body control. If he overextends on the block, the defender will slip by him. If he doesn't extend enough, he won't have the power to move them out of the lane.

It is a pivotal block to spring a runner free. In fact, on both plays Le Sean McCoy was able to rip off big gains.

Joeckel has very little chance of becoming Jason Peters from day one, but if Chiefs fans are underwhelmed by the prospect of adding a left tackle, they need to understand the importance of the position for their offense's future success. Joeckel (or indeed Fisher) has the talent to fill this role and the Chiefs have the surrounding pieces to craft an offense similar to the one that resided in Philadelphia for so long.

Read more from Cian at PreSnapReads.com.