The 2013 Arrowhead Pride NFL mock draft continues. AP user bradelli58 is representing the Atlanta Falcons with the No. 30 overall pick...

In 2012 the Atlanta Falcons started the season on fire by setting a franchise record with 8 straight wins before losing to the Saints. They continued their strong play after that loss and finished with a record of 13-3. In their first playoff game the Falcons held off impressive rookie QB Russell Wilson and the Seattle Seahawks to make it to the NFC Championship game for the first time since 2004. In that game, they lead the San Francisco 49ers at halftime, but went on to lose after the 49ers scored 14 unanswered second half points. In that game, Falcons QB Matt Ryan was injured on the last drive and then threw two incomplete passes to end the game. The injuries may not have led directly to the incomplete passes, but it is important that the Falcons protect their franchise QB. The Falcons are a talented team in win now mode with QB Matt Ryan leading the way. The have some holes to fill after key departures this offseason through free agency and cuts and will look to the draft to fill some of those holes. Now on to the pick.

In honor of the 2013 NCAA Final Four being played in Atlanta, I'm gonna make the pick March Madness style. I will list what I think are the Falcons current needs in order (this will be the Final Four seeding). For each need, I will pick the best available player that fits that need. Let the tournament begin!

After losing Dunta Robinson and Brent Grimes in free agency, the Falcons only have one proven CB on the roster, Asante Samuel. With the NFL moving more and more towards a passing league, teams have to be able to defend the pass. Jamar Taylor has been moving up draft boards after his strong combine performance (40yd dash: 4.39, Bench Press: 22 reps) and has the ability to play both man and zone schemes. He would immediately contend for a starting spot opposite Asante Samuel.

With Tony Gonzalez deciding to play one more year, the Falcons can hold off on filling the TE spot. However, the team doesnt currently have a replacement on the roster. Zach Ertz has the ability to be a productive pass catcher and an above average blocker. He would be able to study under Tony G. and contribute for a year before becoming the starter in 2014.

Now if Tyler Eifert was still available, this would be much closer and a possible upset because I see Eifert as being rated higher than both players by a pretty good margin. However, I feel Jamar Taylor is a better prospect and a bigger need then Zach Ertz, so he moves on.

After cutting John Abraham, the Falcons replaced him in free agency with former Giant Osi Umenyiora. Umenyiora can still be productive, but is 32 years old. There is not much depth behind current starters Umenyiora and Kroy Biermann. The Falcons need to add DEs with the ability to get to the QB. Tank Carradine has that ability. He is a natural pass rusher with good speed and pass rushing moves. Carradine had 11 sacks and 13 tackles for a loss in 12 games last year at FSU. Unfortunately his season ended with an ACL tear, the only thing holding him back from being a mid-first round pick. Even after the injury, Carradine is a great prospect with the ability to contribute his rookie year.

Due to his high salary, the Falcons cut RT Tyson Clabo this offseason. In addition, starting C Todd McClure has retired. Depending on where 2012 pick Peter Konz starts, the Falcons will need to fill two spots, C/G and RT. D.J. Fluker projects to be a starting RT with the possibility of sliding over to OG. He is an elite run blocker that needs to improve his pass protection. Fluker also is battle tested against elite college players in the SEC.

While DE is a greater need positionally, Fluker is a better prospect than Tank Carradine. While the Falcons have 2012 3rd round pick Lamar Holmes as on option at RT, Fluker is a more talented player and would be able to start from day one and ensure that the Falcons keep franchise QB Matt Ryan upright. Fluker moves on.

While I see CB as a bigger need, I believe that Fluker is a slightly better prospect. Also, the CB position is very deep in this years draft. I think there will be a run on CBs in the 2nd and 3rd rd. The Falcons could pick up a starter at CB in those rounds, choosing from players like Johnthan Banks, Blidi Wreh-Wilson, DJ Hayden and Darius Slay. For those two reasons, with the 30th pick in the 2013 NFL draft, the Atlanta Falcons select... 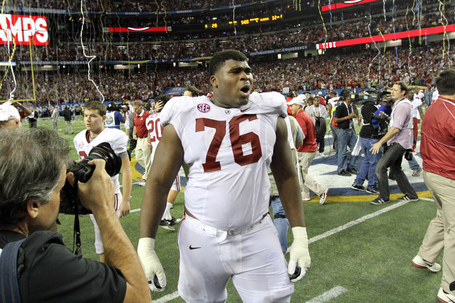