Share All sharing options for: The latest Branden Albert trade rumor says we're all waiting on the Chiefs now

Kansas City Chiefs left tackle Branden Albert hinted several weeks ago at a deadline with the Chiefs regarding his contract situation and all the trade rumors after he signed his franchise tender. We don't know what that deadline is (or was) but the NFL Draft makes the most sense as a deadline. By Thursday or Friday, we could have the Albert trade news that's seemingly been on the verge of happening for weeks now (and even months for some).

Last night it was reported by Jason Cole of Yahoo! Sports that Albert's price tag would have to come down if the Dolphins are going to make the trade. Today NFL Network's Ian Rapoport reports the opposite -- that the Dolphins are willing to pay him.

From TA: My understanding is #Dolphins are willing to meet Branden Albert's contract demands of similar $$ to Duane Brown. Waiting on KC

Duane Brown makes $8 million per year, according to media reports. Seven years, $56 million. Here's what I don't get: the Dolphins apparently wouldn't match Jake Long's $8.5 million contract with the Rams. So now they're going to (almost) match that for Albert? The reasoning seems odd. The idea that the Dolphins want Albert to drop his price, as today's earlier report stated, seems to make more sense given the tackle market this offseason. I'm confused.

Real question is what it has been: Are #Chiefs getting enough for Branden Albert? Is No. 54 from Miami enough? KC making everyone wait

The Chiefs should take any deal they're comfortable with but they can also take this thing until Friday. If Albert is traded, I see one of two timelines: 1.) he's traded on Thursday, the day of the draft or 2.) he's traded on Friday after round one of the draft. The thinking on No. 2 is that some team -- hmm, I don't know, maybe Miami -- doesn't get a tackle they wanted in the first round and then Albert becomes the next best option, priced at one second round pick.

KC wanted a 2 and a 7 originally. Have come down from there RT @d2moo @rapsheet Maybe Chiefs want a 2 and a lower pick too.2 and a 5 or 6

I still think this trade will get done. According to a number of draft analysts, the top three offensive tackles -- Luke Joeckel, Eric Fisher and Lane Johnson -- could all be gone by the top five picks, maybe even top four. If there's a run on tackles that early, others teams who need tackle help are going to be left out in the cold. That's when the Chiefs can capitalize on a trade for Albert.

You don't give a player permission to speak with another team, like Albert and the Dolphins, unless you have a plan in place to replace him. The Chiefs have that plan with the No. 1 overall pick. Because of that I still believe the Chiefs will eventually make this trade. Maybe it's with Miami or maybe it's with another team. I also see it happening partially because I can't see Albert playing for the Chiefs again. My opinion can easily change -- especially if Albert is a Chief at this time next week -- but my three-days-out-from-the-draft prediction is that Albert will be traded.

Would a second round pick be enough in a trade for Branden Albert? According to the majority of our readers, yes it would be. 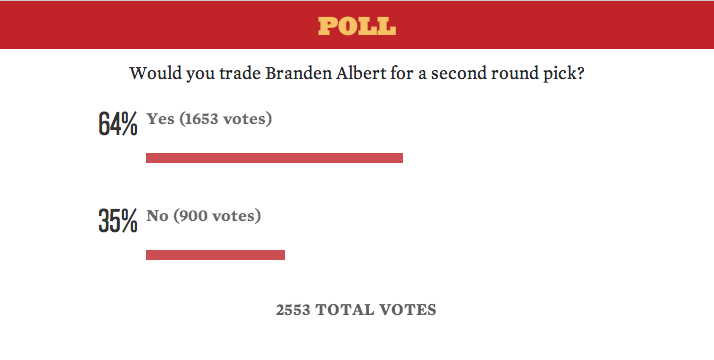 Albert, Dolphins have permission to talk

Dolphins back in the Albert trade rumors