There aren't many teams in the NFL (or any sport for that matter) who have maintained the kind of success that the New England Patriots have. Since the year 2000 they have the NFL's best regular season record of 151-57 for a 73 percent winning percentage and have won three Super Bowl titles. Coincidentally, the year 2000 happened to be the same year Bill Belichick was hired to be the head coach and Tom Brady was drafted in the 6th round with the 199th overall pick. I'm not going to tout Belichick's genius in drafting Brady that year because if he was as smart as everyone thinks he is he would have traded up to draft Brady with the 1st overall pick because he's been that good! Instead every team in the NFL, including our beloved Chiefs, passed on him 5-6 times. Disgusting! When you have the ultimate success because of the greatest draft pick in NFL history, it makes everything else a little easier when you're on the clock.

Belichick and the Patriots have always been movers and shakers on draft day, but due to some recent trades (which haven't really worked out) they aren't as loaded as they have been in years past. This limits their ability to make moves and also makes hitting on all the picks they do have this year even more important. They don't have picks in the 4th round (traded for Aqib Talib), 5th round (traded for Albert Haynesworth) or the 6th round (traded for Chad Ochocinco) which leaves them with a grand total of 5 picks in this year's draft. That's pretty slim pickings when compared to the 49ers, who have a whopping 11 picks this year.

Thankfully (for them) they don't have too many areas of weakness, but the secondary and receiving corps jump out at me. Keeping Aqib Talib after giving up a 4th round pick for him was huge and he really upgraded their defense after he arrived, plus he should only be better with some more time in the system. Hopefully Alfonzo Dennard will be out of jail in time to attend off-season workouts and adding Adrian Wilson to the mix was a key pick up because I think he will help mentor last year's 2nd round pick Tavon Wilson who should only get better. Signing Tommy Kelly was an underrated move and with the development of last year's picks Dont'a Hightower and Chandler Jones to go with Jerod Mayo, Brandon Spikes and Vince Wilfork, I think the front seven will be really good.

This leaves the Patriots in a pretty good position to address the offense and the WR position. Signing Leon Washington, who will play a Danny Woodhead type role, will give them similar play calling options as they had last year as well as add a dynamic kick/punt returner to the team. Losing Welker to the Donkey's is going to hurt more than they realize and I can't believe they didn't pay the man. While I think Danny Amendola will do a good job filling in for Welker, the Patriots haven't had a truly dynamic receiver since Randy Moss and as good as Brady is, he is much better with a weapon like that. Can you imagine this team with Gronkowski, Hernandez, Amendola AND Moss? That would be a NIGHTMARE for defenses to have to gameplan for!

That's why the Patriots will pick.... 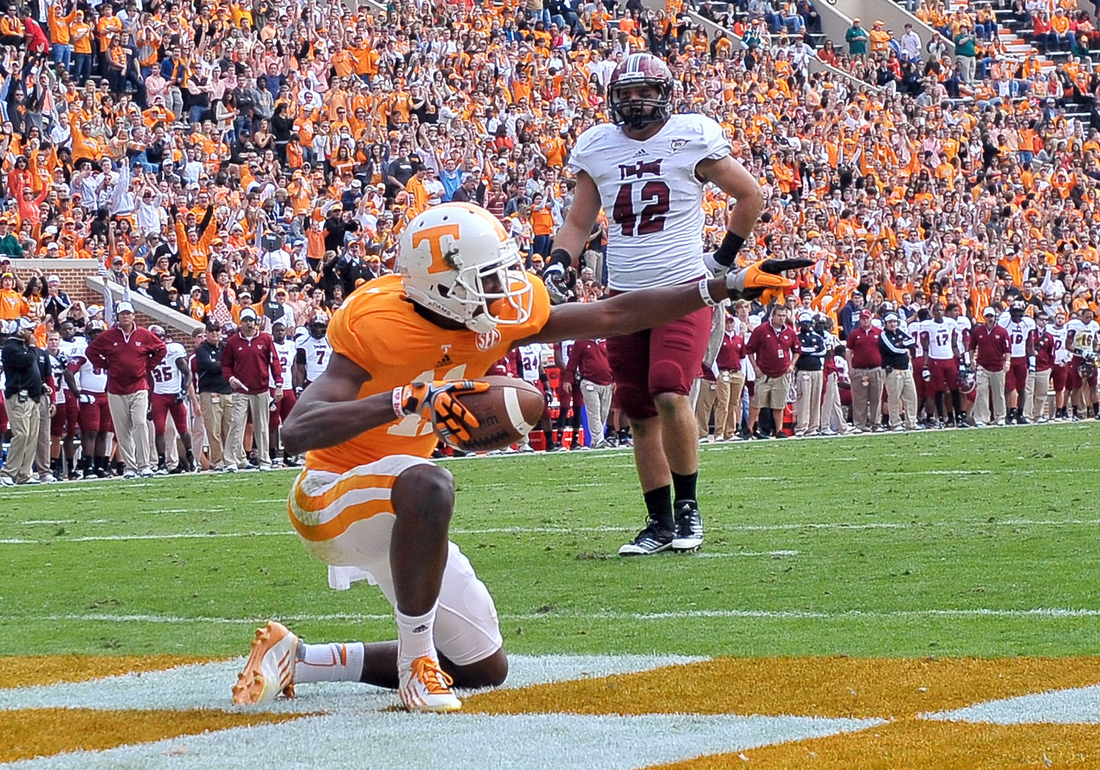 Hunter is a prototypical receiver at 6'4, 200 lbs and has great measurables which he showed off at this year's combine. He is sure handed and in my opinion has the most potential of all the wide receivers in this year's draft, with some scouts offering up some Randy Moss and AJ Green comparisons. With Gronkowski going over the middle, Hernandez lining up everywhere and Amendola working out of the slot, Hunter will have plenty of room to work out wide and over the top to make a huge impact right out of the gate. Defenses will have to stay honest after the emergence of a decent run game last year and with all the receiving options on the field at once they won't know where to focus. If this happens, the Patriots opponents and especially their secondaries are in for some long days!

Like I said earlier, when you draft one of the greatest QB's in history with your 6th round pick, it makes everything else a little easier. Go Chiefs!