NFL Draft 2013: An option for the Kansas City Chiefs in the 2nd round

The Chiefs add another 3-4 pass rusher to their interest list before the 2013 NFL Draft.

Share All sharing options for: NFL Draft 2013: An option for the Kansas City Chiefs in the 2nd round

When his name is read on the submitted draft card, you'll likely hear the name Cornellius Carradine. But for NFL fans, "Tank" will be the name they're familiar with.

The Florida State pass rusher should come off the board relatively early in the first couple of rounds of the 2013 NFL Draft, and the Kansas City Chiefs checked in on him during the Combine as they continue to mine for potential draft interests.

The word on Tank 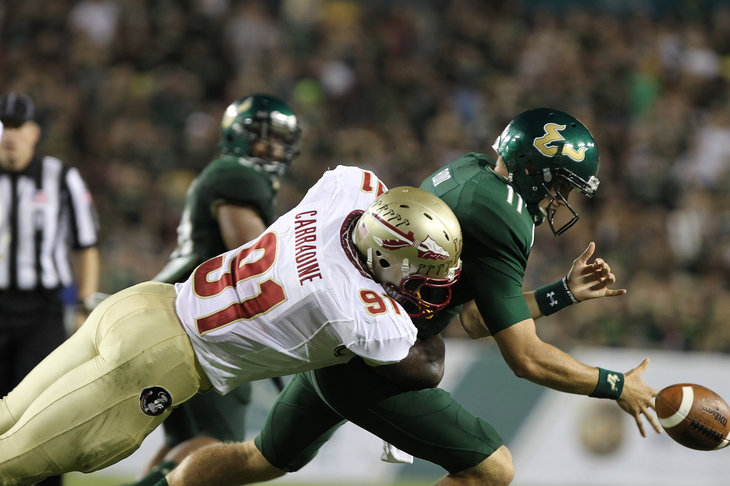 He is a very athletic player who explodes off the snap. He was really developing as a player this year after seeing just limited time in 2011 and playing at a junior college prior to that. He has big, strong, heavy hands and does a good job of steering the offensive linemen before disengaging and making a play. He gets more publicity for his pass rushing, but immediately in the NFL he'll be a better run stopper.

Carradine is coming off of surgery and rehab for a torn ACL suffered in November, and he blew scouts away with a recent workout after such a short amount of time since the December surgery. Incredibly, he still had 80 tackles include 13 for loss and 11.5 sacks for the Seminoles in an abbreviated season.

"I like the 3-4 a lot because I'm able to do more, show more," he told the media at a recent Ravens visit. "I'm able to stand up. I can see more. I can recognize pass and run better when you stand up. I'm able to be in space, drop in coverage and play inside receivers. I feel real good about the 3-4. I've played in a 4-3, but I can play in a 3-4. I can play either scheme really good."

Carradine presents an interesting option for a team without a second round choice (for now). The Chiefs will have to wait to see if Carradine falls as far as the third round where the team has both the 63rd and 96th overall selections, which probably won't happe. While Todd McShay doesn't include Carradine in the first round in his most recent mock and SB Nation's Matthew Fairburn feels the same, Dan Kadar writes that Carradine's recent workout likely locked up a first round spot.

If Carradine falls to the next round, he could be an interesting choice for the Chiefs to consider if they land a second round choice from the rumored Branden Albert deal.

Joeckel or Fisher? Make your pick

Chiefs draft room will be full