The 2013 Arrowhead Pride NFL mock draft continues. AP user ravenhawk is representing the Denver Broncos with the No. 28 overall pick...

Ravenhawk reporting Denver’s 1st round pick here at U of L’s George J. Howe Red Barn in Louisville, KY. The reason for reporting at the Red Barn is because U of L knows champions. Most relevant to this pick U of L was crowned Sugar Bowl champions. More recently U of L has been crown Final 4 Champions. The past 2 years U of L has had the best swimming and diving teams and this year they finished in 2nd place. John Elway should take a page from Tom Jurich’s book on putting together a winning team.

So Mr. Elway I suggest you take a look at Louisville for guidance as this city knows champions.

Since the attention is on Louisville Mr. Elway and the Kentucky Derby will be running on May 4th, I figure you would enjoy hearing about the ‘studs’ that will be competing. Who knows Mr. Elway? You might just get lucky.

Will take charge has been compared to Margus Hunt DE/DT out of SMU. If Will take Charge pans out he is going to be the big winner in the Kentucky Derby. Hunt and Will take Charge have lots of potential and are extremely powerful win placed out on the edge. They both like to stuff the run and make their presence know pass rushing off of the edge.

Vyjack has been compared to Tank Carradine DE out of Florida State. Some say that Carradine is bigger than Vyjack but they both have similar styles of play (though I must say these folks are delusional). Both these competitors are very good pass-rusher, but they have a liability of defending the opposing teams run.

Governor Charlie has been compared to Ryan Nassib QB out of Syracuse. Governor Charlie has similar signal calling as Nassib. They are both game managers that display some accuracy on touch passes. These guys aren’t going to set the world on fire but are competitors by displaying their intelligence and physical skill sets. The biggest drawback is when they get behind and have long strides to make up both are a liability in getting the big win.

Black Onyx has been compared to Alex Okafor DE/OLB out of Texas. Like Okafor, Black Onyx has been a steady and a consistent pass-rusher. Both these guys have been winner with the combination of speed, strength moves and versatility. Oakafor at 6’ 4" 246 lbs is a little smaller than Black Onyx.

On defense Denver improved their defense by signing defensive tackle Terrance Knighton and cornerback Dominique Rodgers-Cromartie. The handling of Elvis Dumervil has the Broncos in dire need to find an edge rusher to team with Von Miller. Unfortunately I do not find Margus Hunt or Tank Carradine to be able to fill those shoes. I also do not find any linebacker worthy of this pick with Arthur Brown already off the table.

On offense Denver should have Manning continue to play at a high level. The Broncos added Wes Welker as well as guard Louis Vasquez in free agency. The only other quarterback on Denver's roster is Brock Osweiler so it's probably a good idea for John Elway to grab a potential heir apparent at some point. I think the Broncos are better served to pass on a QB in round one and think about QB or LB in round 2.

The Broncos could also use a big back as Willis McGahee is under contract for 2013 and he is up there in RB years. Knowshon Moreno still doesn’t put the fear into defenses. The offense could be best served by getting a tough RB that will help open up the offense. 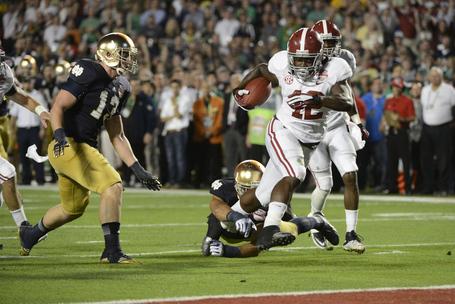 While Lacy isn’t going to tear up the times at the Kentucky Derby, he is tough workhorse that will get the job done out in the fields. Denver knows Clydesdale horses my suggested pick of Eddie Lacy is more of a Friesian breed. They are both muscular bodied with comparably stronger shorter limbs.

Another reason Broncos fans should pay attention to Friesen and Lacy is because neither are inbred like the Clydesdales found in Denver.

In Lacy’s sophomore year at Alabama he was the backup to Trent Richardson. When Lacy received carries, he was solid running for 631 yards on 84 carries and seven touchdowns. He had a tremendous offensive line and had productive season in 2012 running for 1322 yards and seventeen touchdowns. Lacey averaged 6.7 yards per carry compared to Trent Richardson’s best year of 6.3

Lacy was a power runner for Alabama and lost touches to standout freshman T.J. Yeldon. Lacy caught 22 passes for 189 yards and two touchdowns, too. He had massive performances against Georgia (20-181) in the SEC Championship and Notre Dame (20-140) in the National Championship.

Lacy's stock was rising steadily since the completion of the 2012 season. He has been slow to rise lately because he has been unable to work out with scouts due to injury. The concerns scouts have is if Lacy can pick up blocking and receiving in the passing game. Scouts love his running ability with his power, quickness and elusiveness. I personally liked him more than Richardson last season.