The 2013 Arrowhead Pride NFL mock draft continues. AP user RhodyChief is representing the Houston Texans with the No. 27 overall pick...

Let’s be honest: After the Houston Texans were blown out 42-14 by the New England Patriots on Monday Night Football, did anyone think that they had a legitimate shot at making it to the Super Bowl?

It’s funny how one game can change your opinion of a team so drastically. Even though they struggled against the lowly Jaguars and under-achieving Lions they came from behind to win both games in overtime. Questions on whether Matt Schaub could bring a team back seemed to have been answered. Then two weeks later, the Monday Night Debacle happened.

I don’t think I’ve ever seen a quarterback seemingly regress so much in one game than Schaub. It was only 14-0 after the 1st quarter but not only could you see it in his eyes, you could see it in his teammates. This wasn’t the Jaguars and Chad Henne. This wasn’t even the Lions and Matthew Stafford. It was Tom Bleepin’ Brady, Vince "try to run up the middle" Wilfork and The Hoodie. The Texans rely on the run to set up the pass (boy, doesn’t that sound familiar.) When Arian Foster is dominating it allows Schaub to run play-action and use Andre Johnson and the TEs to find holes in coverage and beat you downfield. It was a formula that for the most part was always effecting for them. However, once the Patriots had gone up by two scores and effectively neutralized Arian Foster the only way for the Texans to stay competitive was to rely on Schaub. Well, we all know how that turned out.

The Texans would lose 3 of their last 4 games and stumble into the playoffs including losing the 1st round bye they held up until the last game of the season. Even though they were able to beat the Bengals in one of the ugliest Wild-Card games we’ve seen in recent memory they again lost to the Pats 41-28 in a game that wasn’t as close as the score would indicate.

So after a disappointing season in which the Texans fell short of expectations, where do they go from here?

Much like last season the Texans lost some pretty good players in the offseason. OLB Connor Barwin decided to join Chip Kelly and the Eagles while getting a very nice contract in the process (6 years, $36 million.) Barwin is a solid player but only had 4.5 sacks this past season and it’s questionable if he was worth that large of a commitment. The Texans also have last year’s 1st round pick Whitney Mercilus to step in and take over that spot so I don’t expect there to be much of a drop-off, if at all.

It’s two of the subtractions on the offensive side that concerns me for the Texans. They decided not to resign WR Kevin Walter and hybrid TE James Casey, two of the Top 5 receivers on the team last year. They combined for 75 catches, 848 yards and 5 touchdowns. Walter had been with Houston since 2006 and developed into a very reliable possession receiver. He’s always been considered the #2 WR on the Texans but I never thought he lived up to that billing. Casey was in his 4th year with the team and had his best season, becoming a reliable 2nd option next to Owen Daniels as a TE and a valuable blocker when playing the FB in front of Foster. While you won’t confuse either player as a game-changing weapon the skills that both brought to the table will be missed, especially by Schaub. He still has Andre Johnson and Daniels, but who else?

The rest of the Texans WR depth chart is full of question marks and unproven players. The Texans took two receivers last year in the draft, DeVier Posey in the 3rd round and Keshawn Martin in the 4th. They also have Lestar Jean who was an undrafted free agent in 2011. The total stats for these three receivers from this past season? 22 catches, 323 yards and 2 touchdowns. To say that there was a lack of production from these players would be an understatement. To top it off Posey tore his Achilles at the end of the season and isn’t expected back until the middle of the 2013 season, weakening them even further.

At the tight-end spot the only other player with experience besides Daniels is Garrett Graham. Last year was his first season of regular playing time and he put up pretty good numbers for a 3rd string TE, having 28 catches for 263 yards and 3 touchdowns. This coming season will be an important one for Graham as he is arguably the team’s 3rd option at receiver right now. Can he develop further and become a reliable threat for the Texans? That remains to be seen.

If I’m a Texans fan I’m extremely nervous by the lack of talent in the passing game right now. You have a quarterback who isn’t known for being a deep-thrower (even though he does have the ability to get the ball down the field on occasion) and who relies on those short to intermediate routes to have continued success. Their two best players are starting to creep up in age (Daniels is 30, Johnson is 31) and both have had injury concerns over the course of their careers that you have to consider as they get older. Surrounding them is a group of young receivers who have yet to prove anything in the NFL. Worst of all, they took away Schaub’s security blanket (Walter) and didn’t replace him in free agency.

There is a desperate need for a playmaker on the Houston offense, one who prevents teams from double-covering Johnson and Daniels and who can play all across the field, not just on the sidelines or across the middle. They need a hybrid player who can not only catch passes but isn’t afraid to block. They need someone who isn’t afraid to get hit and will risk his body in order to make the catch. That being said…

With the 27th pick in the 2013 NFL Draft, the Houston Texans select… 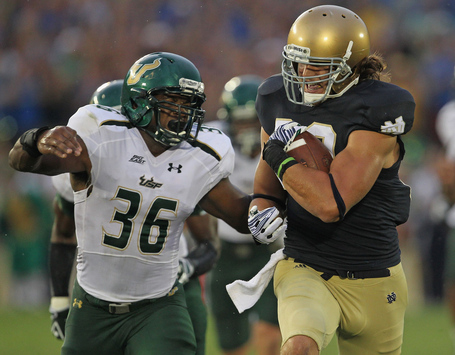 There may be no better offensive player in this draft better suited to the Texans needs than Eifert. He has the ability to line up all over the field and can provide matchup problems for both CBs and LBs because of his size, speed and strength at the position. He has some of the best hands of any receiver of this class, making some very hard catches look easy at times. He’s going to win you a lot of one-on-one matchups. While he is not a great blocker he puts in the effort to try and stop defenders and an area he can continue to improve in. I don’t think he’s a player you’re going to ask to shut down a rusher like Gronkowski can but more along the lines of a very good blocking WR, being able to seal off their defender and prevent them from making a play.

Tyler Eifert is the perfect match for Matt Schaub. It provides a versatile weapon that defenses have to account for and his talents fit a play-action offense perfectly. His ability to go up and get the ball is a tremendous asset to have and at 6-5 he’ll have a lot of those opportunities, not to mention if he’s going against a less athletic linebacker. When you look at what hybrid tight-ends like Aaron Hernandez and Jimmy Graham have done it’s easy to see what having a player of that type can do for an offense.

Last year in the AP mock draft I took Stephen Hill for the Texans for primarily the same reason: He was a playmaker on a team that lacked them. In reality they went defense and the lack of another true weapon hurt them in the long run. Hopefully this year they heed my advice and give Houston a player who’s a even better fit for their offense than I thought Hill could be.