Alex Smith says every team has a shot every year, including the Kansas City Chiefs

That headline says a lot about where the KC Chiefs have been in recent years. Alex Smith, the Chiefs new QB, says every team in the NFL should have a win-now attitude. Other Chiefs agree, and point out the talent on the roster to compete immediately.

Share All sharing options for: Alex Smith says every team has a shot every year, including the Kansas City Chiefs

From the trade for Alex Smith to free agent signings Dunta Robinson, Sean Smith and Anthony Fasano, it's clear that the Kansas City Chiefs new regime does not view this as a rebuilding year. This is the NFL -- there is no rebuilding. You can go from worst to first. Some team does it every year. Why not the Chiefs?

More: Albert doesn't show up on day 1 What the Chiefs did on day 1

Chiefs quarterback Alex Smith is a big part of the "win-now" perception. Rolling with the rookie quarterback would buy the Chiefs some time with their expectations but adding Smith, a veteran starter, makes it clear that Andy Reid believes he can be competitive this year.

"I think that's the case for every NFL team, and if it's not the case, it's a problem," Alex Smith said of the win-now attitude (comments via the Chiefs). "We're trying to win right now. I think that's the great thing about the NFL. You're out there and there are very few perennials. It's a battle every single year. You can go first to worst, worst to first. There is so much parity across the league. That's the mindset here, that's for sure. If it's not win now, then that's a problem."

Day 1 of the offseason program 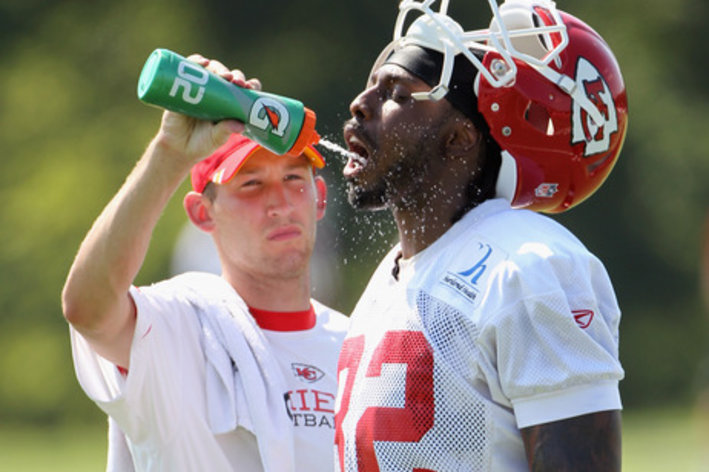 "We really didn't go over plays today," Andy Reid said. "That's not what we did. We mainly went over philosophy for the offense, we talked about formations, motions and shifts. The protections that lead up to being able to put in the actual play. You only have them for a few hours so tomorrow we'll start on the plays. "

I laugh to myself when I hear teams talk about rebuilding because that's just a built-in excuse for why your team is struggling. The Chiefs, of course, did a lot of rebuilding over the past five years.

Indeed, the beauty of the NFL is that every summer (almost) every single team can legitimately claim they have a shot at the playoffs, and therefore a shot at a ring. The 2-14 Chiefs are the absolute perfect example of this. Does anyone here think the Chiefs have no shot at the playoffs? I bet the number of people who believe that is very low. The Chiefs clearly have a shot.

"I've never seen a team go 2-14 and have six Pro Bowlers," Dunta Robinson said (comments via the Chiefs). "I knew that the talent was definitely there, a few pieces here, a few pieces there, I thought would make a big difference. Bringing in Alex, bringing in corners, I think those were the biggest holes on this football team a year ago. I think they filled those holes in the offseason. we just have to be as advertised and as good as we think we are, and I think we'll make a big difference for this football team. I think you'll see more wins than two going into 2013."

Dunta Robinson is obviously biased because he's getting a paycheck from the same team he's talking up but his point remains: the Chiefs are competitive ... on paper. Every NFL fan base goes through this at this point in the season. You don't think Browns fans aren't projecting Brandon Weeden's year two stats, hoping he can make a playoff run? Or Bills fans anxious to see if Kevin Kolb, or a rookie QB, can lead them to the postseason? Or Raiders fans and .... well, almost every team feels they have a shot.

"It's the first day of a long haul," Smith said after the first day of the Chiefs offseason program, "but you have to treat every day like a sprint, work as hard as you can to get better each and every day and keep stacking days together."

Let's appreciate this moment, folks. No, not the parity thing. That the Chiefs new QB did NOT take the opportunity to lay down the "This is a marathon, not a sprint" cliche. Instead he said this is just a sprint every day.

It's the little things.

Andy Studebaker has been cut