Chiefs give Dolphins permission to speak with Branden Albert; Visit to Miami planned

The latest Branden Albert trade rumors advance the stage of the talks between the Chiefs and Dolphins. Per a report, Albert has received permission to speak with the Dolphins regarding a contract, and is expected to visit the Dolphins facility in the coming days.

Share All sharing options for: Chiefs give Dolphins permission to speak with Branden Albert; Visit to Miami planned

The Branden Albert trade rumors continue, and the latest nugget is an important one. According to ESPN's John Clayton, the Kansas City Chiefs have given the Miami Dolphins permission to speak with Albert's agent. This is significant because anyone trading for Albert would likely want to have a long-term contract in place. The discussions between Albert and the Dolphins likely centers around a long-term contract.

This is yet another strong sign that Albert is on his way out. Clayton reports Albert, who lives in Miami in the offseason, "is expected to visit the Dolphins' facility in the next couple of days for a physical."

Assuming he passes the physical, that's step one. Step two would be working out the parameters of a long-term deal. And step three would be agreeing on compensation with the Chiefs. 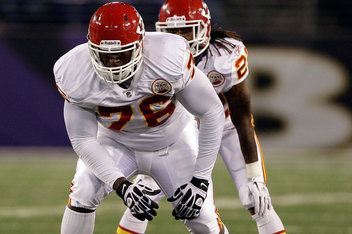 Will he go or will he stay? Read on for complete coverage of the Branden Albert trade rumors.

The Chiefs are believed to be seeking a "high second round pick" for Albert. Miami has two second round picks -- No. 42 and No. 54 overall. The Chiefs obviously would prefer the higher of those two picks. It's unclear where the two teams stand as it relates to possible compensation in a trade.

Albert spoke with NFL Network several weeks ago and said he was seeking "clarity" in his situation. He understood a trade was possible and hinted at a possible deadline on getting something done.

I spoke with Kevin Nogle of The Phinsider recently and Dolphins fans don't seem too keen on the idea of giving up a second round pick for Albert.

Trade value chart: Cost of trading the No. 1 pick

Mel Kiper's prediction for the Chiefs