More holes to fill than one would think for being the 6th best team in the NFL. The OL has been underachieving, the DL Swiss cheese, WRs are decent but undermanned, ILBs are only OK, RBs are average at best and the secondary either needs to get healthy, mature or get more talent. I went over to the excellent SBN Green Bay Packers blog, Acme Packing Company, to get their hopes and analysis. The fans there are polite, educated and willing to help. Using their opinions and insight I made my pick based off of their stated team needs.

To call the offensive line underachieving is probably an understatement. When you have an elite QB in Aaron Rodgers it's probably a good idea to pass protect better than giving up 51 sacks (second most in NFL in 2012). The run blocking is better but still an issue, the team averaged only 3.9 yds per carry (some of that can be assigned to the RB), but still needs help.

The defensive line was disappointing to say it best, the Packers were hoping for run stuffing help with 2012 second round pick pick Jerel Worthy but he was injured and did not play up to expectations. B.J. Raji, the Pro Bowl NT from a couple years ago regressed tremendously in 2012. Collectively they were the 23rd ranked rush defense per carry, giving up 4.5 yds per carry and 17th in total run defense yards. Outside runs seemed to be the downfall, ranking 28th and 21st in runs around the ends. The DE is supposed to stop those runs and force the RB inside to where help is (MN inspired side note, for KC Tyson Jacksons side was ranked #5 in the NFL last year).

Wide receivers are decent, but there are certainly not enough of them. Donald Driver, the ageless wonder himself, has decided to retire. Jordy Nelson, James Jones and Randall Cobb are really all that's there, and none of them are a #1 WR in my opinion. When you are a high powered passing attack you can never have to many pass catchers (My fantasy football team inspired side note: yes Finley, you are supposed to CATCH the passes).

When you're running backs are James Starks, Ryan Grant and Jon Kuhn (KUHN!!!) you might need more help here. A speed guy would go nice as well because none of these guys are burners so to speak.

With the 26th Pick in the NFL draft the Green Bay Packers select.... 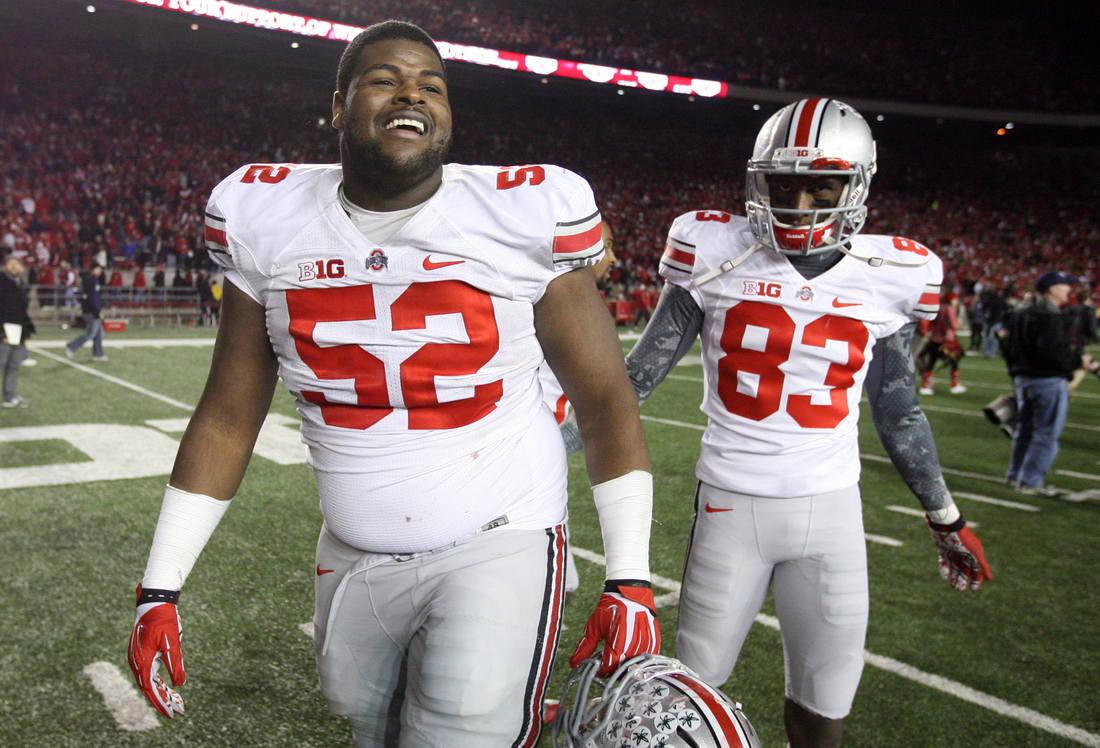 Johnathan Hankins is a big son of a gun, listed at 322 at Ohio State (I think that's a lie, he looked about a biscuit away from 350). He is a physically powerful player, controlling multiple linemen by himself, allowing others to make the plays and get the stats. He's lined up primarily inside in the 4-3 defense, but would at times line up outside as well. The Buckeye coaches think highly of him, both as a player and as a person, he has in fact been compared to our own Dontari Poe in size and physicality. Quicker than he looks, he has a good first step and can chase after the ball carrier and QB, but he is definitely a run stuffer first.

Like most college defensive linemen he has some things he needs to work on: His stamina needs improvement, his weight needs controlled (see biscuit analogy above), his snaps will need to be monitored as he is much better earlier in games, (he rarely left the field, but would get noticeably worn down as games went along), his technique needs improvement as he relied heavily on just being stronger and bigger than most of the offensive guys he went against. There will be a learning curve with him and will probably be brought along slowly. He will be able to play any position on the DL with the Packers 3-4 defense, he will be probably depth initially and a starter by year 2. An interesting thing of note here, the Packers have only 3 DL on contract for 2014, so especially look for them to plan for the future with this pick.