The Kansas City Chiefs took the field for the start of a 3-day (voluntary) minicamp on Tuesday. What did we learn after one day of workouts? Plenty. Here are 15 takeaways from the first practice.

Share All sharing options for: 15 things to remember from Kansas City Chiefs minicamp after day one

1. Branden Albert is not there. He did not attend the start of the voluntary minicamp on Tuesday, which is what we expected. Albert said a couple weeks ago he's awaiting "clarity" on his situation, and hinted at a deadline with the Chiefs. "We just get down to business," Andy Reid said, "and we don't really concentrate on the guys that aren't here. We concentrate onthe guys that are." Reid said Albert's decision not to attend is his and not the Chiefs.

2. Rodney Hudson is healthy. This is what we expected but also good news to get it confirmed. At least it's what I expected, but not everyone did.

And now this week:

Were people honestly worried about Rodney Hudson? I was pretty sure he was coming back strong...hrm. #Chiefs

He broke a bone in his leg last September and lined up at center in practice on Tuesday. He should be fine.

4. Everyone else is healthy. Moeaki was the only Chief in attendance who was not practicing.

5. The inside linebacker spot goes to...

Akeem Jordan was the starting ILB with Derrick Johnson. Poe and Tyson Jackson were the inside pass rushers in the nickel.

How big of a hole is the inside linebacker spot next to Derrick Johnson? Jordan was signed this week and was plugged in as the No. 1 at that spot. Linebacker Zac Diles was signed, too. Lots of movement can be expected there.

7. But the o-line can't be analyzed yet. Without Albert there, and without the No. 1 pick in the lineup (which will probably be an offensive lineman), it's hard to take anything away from how the Chiefs lined up along the line.

Reporter: What's the challenge for you afer 14 years in one place, and now you'e starting over late in your career? (Pause.) I assume it's late.

Some observations from #Chiefs minicamp: Dunta Robinson spent most time opposite Brandon Flowers, not Sean Smith, as many expected.

This is actually expected. Reid previously said Dunta would start off as the cornerback opposite Flowers and they'd go from there. So we knew that was Dunta's spot on day one. What happens from here on out is where it will get interesting.

As for Sean Smith...

As Reid had said, Robinson was starting CB along with Flowers. Smith came in with the nickel with Flowers, interestingly, covering the slot

10. Andy Reid can hold his composure. As Reid was being courted by the Chiefs in January, ESPN's Ed Werder showed how unfunny he is with a stupid and unnecessary crack about Reid's weight on the air. (It's one thing to make jokes about someone's weight. It's another to make bad jokes about someone's weight.) Werder was in Kansas City reporting on the Chiefs minicamp Tuesday and Reid did NOT beat him up.

11. The Chiefs practiced indoors at their practice facility, and could continue to do so the rest of the week. "The weather looks like it's going to be this way for the next few days. That's ok. We're in here. We do our thing. We have plenty of room." 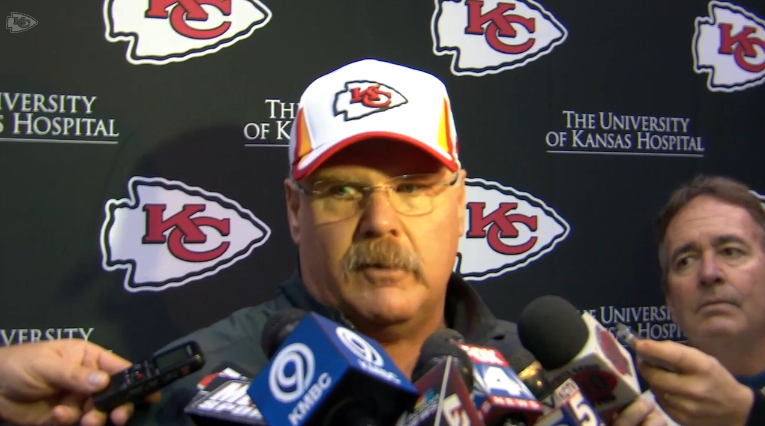 13. Andy Reid explained what's been going down in the offseason program. "The way we went about it was that we installed the last couple weeks. We took it slow. We took the eight days to do the install, and then we came back and practiced those things that we had meetings on the first couple weeks. They're hearing it a second time, digesting it and then we're asking to go at it at a fast pace here. In other words, rapid firepace of calling plays, getting to the line of scrimmage and executing. Like I said, is it all perfect? No, but we'll get there."

14. Bob Fescoe gets down to business when asking questions. He asked: Can you make Jon Baldwin a productive wide receiver? Andy Reid responded: "I would tell you this, Jon is working hard. You saw him out there today. Jon is a unique specimen being as big as he is. He can do some things that people can't do just because of size and strength if he puts himself in the position to do that. He's working hard at it. He had a good day today."

15. There are two tryout players in minicamp. Reid didn't confirm who they were but Adam Teicher reported they were Kansas State tight end Jeron Mastrud and Oklahoma State linebacker Orie Lemon.