The Kansas City Chiefs will have a three-day voluntary minicamp from Tuesday-Thursday of this week. Though it's voluntary, we expect (almost) everyone to show up. The Chiefs players will be getting on the field together for the first time which should help us answer a few questions we've had about the team since Andy Reid and John Dorsey began putting their stamp on the team.

Who will show up?

According to the Chiefs roster they have 68 players under contract. My guess is that 67 of those 68 players are present. The one missing? Branden Albert. He missed the start of the KC Chiefs offseason program on April 1 and spoke to NFL AM shortly thereafter, explaining this thought process. He just wants some clarity in his situation -- is he going to be a Chief or not? This minicamp is voluntary so he is not required to be in attendance and he will not be fined for missing it. I would strongly suspect that head coach Andy Reid and GM John Dorsey are aware of whether he will be attending or not.

The big bucket date for Albert right now is the draft. On that NFL AM appearance he hinted at some sort of deadline with the Chiefs, which I would guess is related to the draft. He could be traded in the days leading up to the draft, on draft weekend or shortly after that. Either way, I see Albert being traded before the 2013 season. And if that's true, there's little reason for him to attend the workouts. It's possible the Chiefs themselves even encouraged Albert not to attend if they are truly trying to trade him.

The minicamp is three days long. On the first and third days (Tuesday and Thursday) head coach Andy Reid will speak to the media as will quarterback Alex Smith.

On every other day, various Chiefs players will be speaking to the media.

Unrelated to the minicamp, GM John Dorsey will be speaking on Friday at his pre-draft press conference. More on that later.

Who's lining up where?

1. Dunta Robinson and Sean Smith: Both were signed in the offseason and one of them will play opposite Brandon Flowers on the outside while the other may spend time in the slot or at safety or as a reserve. (Well, multi million dollar contracts actually don't scream "reserve".) Dunta said earlier in the offseason that he's competing for a starting corner job.

"I think the problem we have now is a good problem," Dunta said in March. "Now we have three good corners that can play football. It's a situation I've been in before. We just have to make sure we come together and our goal ultimately is to become the best secondary in the league."

Dunta Robinson"Robinson is a much better zone CB than he is in man to man. He does a great job recognizing run vs pass and has the closing speed to help against the run both because of willingness and recognition."
Sean Smith"He could one day be a Pro Bowl type player, if he can put it all together consistently, but you also have to expect there to be games where you are screaming at the TV trying to figure out what exactly Smith is doing out there."
Dexter McCluster"He needs to stick with multiple-cut routes between 5-15 yards of the line of scrimmage ... 90 percent of the time I want to see him cutting rather than sprinting."

Reid said earlier in the offseason that Dunta would be the starter when they lined up to begin with. However, that could change (if not likely to change). Schematically, Smith playing press corner with Dunta, who is a little older, acting as the third cornerback or playing safety seems to make the most sense.

2. The defensive line: I'd put it like this: DE Tyson Jackson, NT Dontari Poe and DE Mike DeVito. On paper, that's what this line looks like at the moment. Does Allen Bailey get in there somehow? What's the rotation along the d-line? Is it Jerrell Powe or Anthony Toribio after Poe? I think we have the front line nailed down. We just need to know how things shake out after that.

3. Anthony Fasano and Tony Moeaki: Moeaki is the incumbent while Fasano is the newcomer. The money says Fasano is going to see a lot of playing time this year. However, their skill sets are slightly different. Fasano is bigger and a better blocker. If the Chiefs are going to put second year Donald Stephenson on the right side, Fasano's blocking will come in handy. Moeaki seems to be more athletic, more of a pass-catcher. I'm very curious to see how these two work together. Are they on the field at the same time?

4. The offensive line: Without Albert and the unknown of Hudson, this could be interesting. Last year Donald Stephenson worked as a backup to Albert (when he wasn't on the right side), so put him at left tackle assuming Albert doesn't show. Jon Asamoah is your guard, and if healthy Hudson is your center. Jeff Allen presumably will be the other guard, although I've wonder if he could revert to the position he played in college -- offensive tackle. Geoff Schwartz fits in there someplace, too. He says he's a guard who can play tackle so perhaps he's in at guard and Allen is a tackle. Or vice versa. Not only do we want to know the starters, I want to know who the backups are. Who's the swing tackle? What reserves are there for the interior of the line?

Ryan Lilja coming back? Everything we know

5. Dexter McCluster: Andy Reid said last month there is a place for him.

"He's not the biggest guy in the world, but he's got a heart of a lion," Reid said. "He's got that MO, tremendous quickness and can catch. He's pretty good at running the football, so there is a place for him. You line him up everywhere. You can move him around and kind of do some unique things with him."

"He's pretty good at running the football, so there is a place for him. You line him up everywhere." -Reid on McCluster

Reid said back then that he liked the way Charlie Weis used Jamaal Charles in 2010, perhaps hinting at what we could see with Charles and McCluster this season.

6. The final linebacker spot: The Chiefs just this week signed two linebackers -- Zac Diles and Akeem Jordan -- and now that I think about it those signings were done with this practice in mind. They needed bodies at inside linebacker. Diles and Jordan are both viewed as borderline starters so perhaps they're battling it out. Or perhaps they're placeholders until another player comes in. Or maybe there's someone already on the roster who is going to take that job. That's the only position that really jumps out at you as one without a clear starter.

Is Hudson healthy? Other injury updates

Rodney Hudson is the biggest name that comes to mind. I wrote a couple of weeks ago that I thought Hudson should be healthy based on comments Romeo Crennel made at the time of his injury last September. (Read those comments here.) But I can't say for sure whether Hudson is healthy after a broken bone in his leg last year. The fact that the Chiefs have approached Ryan Lilja about returning makes you wonder. Is that to come back and play guard? Or act as insurance for Hudson? We just don't know. My gut tells me that if Hudson's injury were a legitimate issue, the Chiefs would've had a firm backup plan in place by now.

No other obvious injuries jump out at me. When we last left the Chiefs, they had 1/3rd of the roster on the Week 17 injury report, but it didn't appear there was anything significant. Dwayne Bowe, for example, ended his season early due to broken ribs but he should be fine. Alex Smith was replaced midway through last season after a concussion but he's healthy. Others had some dings. 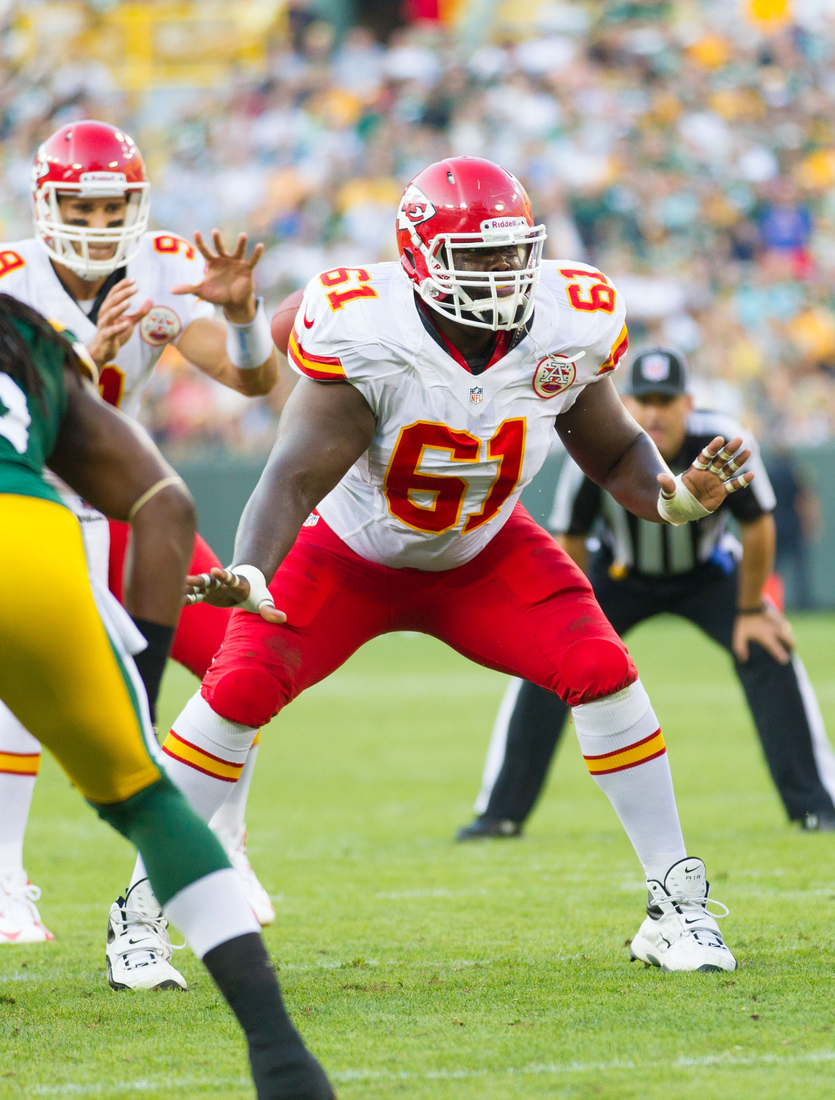 Jamaal Charles and then ... ? Who lines up behind Charles? Cyrus Gray? Shaun Draughn? Those are your two in-house candidates. Andy Reid has also had some success drafting running backs so keep an eye on that.

Eric Berry and then ... ? We assume that's Kendrick Lewis. But the Chiefs did sign a couple of safeties this offseason, including (potentially) Dunta Robinson. I'm curious to see how that shakes out.

Jon Baldwin vs. Donnie Avery: Are they battling for the same spot as the No. 2? Baldwin is younger, but Avery was signed by this regime, not inherited like Baldwin. That usually counts for something.

Does Andy Reid use a fullback at all? There are three on the Chiefs roster, including one signed this offseason: Nate Eachus, Patrick DiMarco and Ryan D'Imperio.

DeQuan Menzie returns: Remember him? He was sidelined early last year so we hardly saw any of him but he was a fifth round pick. He very well could be contributing this year.

Rules for the minicamp

Lots of rules with the new CBA. See some of them below:

Stuff to read before today's minicamp:

Would you trade Albert for a second round pick?

Inside linebackers that could interest the Chiefs

Picture: Chiefs fan has a tattoo on his lips

When is the Chiefs schedule coming out?