"It is better to be lucky than good."

It's an old sports refrain, and speaks to the nature of sports more than anything. A player can only be so "good" at his particular game. Even Michael Jordan, the Association's G.O.A.T., lost almost a third of the time (639-291 regular season, 119-60 playoffs). Even as good as His Airness was, he couldn't win every game.

Recently on AP I read a comment lamenting the fact the Chiefs "can't even lose right". This was, of course, in reference to the Chiefs having the first overall pick in a draft where there are no sure-fire franchise QB's, sandwiched between the Andrew Luck/RGIII and Jadeveon Clowney drafts. As upsetting as this may be, I would suggest that it is not that the Chiefs can't "lose right". Rather, it's just our luck.

Six picks ago, we looked at the journey the Rams have taken down the road of mediocrity since Super Bowl XXXVI. We're going to continue that journey now, but rejoin the team in 2009. Jim Haslett left the franchise in tatters after taking over for the fired Scott Linehan in the 2008 season. The Rams then hired the hot-name, up-and-coming coordinator in the NFL that year, the New York Football Giants' defensive coordinator, Steve Spagnuolo. Spagnuolo's first season in 2009 was a disaster; the Giants finished the season 1-15 and "earned" the first pick in the 2010 draft.

This is where the first bit of luck came into play for the Rams. Sam Bradford would have surely been one of the first two QB's taken in the 2009 draft, but chose to return for his junior season at Oklahoma after losing to the Tim Tebow-led Florida Gators in the national championship game. Had Bradford come out after a stellar sophomore season, he would not have been there for the Rams to draft in 2010.

The Rams' second bit of luck comes in the 2010 season as well. Andrew Luck (you can't make this stuff up) is the darling of the college football world, leading Stanford to it's first BCS game, an Orange Bowl victory over Virginia Tech. He was the presumptive first pick of the 2011 draft, the player who would save football in Carolina. Luck then does the unthinkable: he bypasses NFL riches to return to Stanford for his senior season. Draft pundits widely panned him for this move as he was a lock to be the number one pick in the draft; and you can't go any higher than number one.

So what happens in the 2011 season? The Rams nearly win the "Suck for Luck" sweepstakes, earning the second overall pick in the 2012 draft. As it turns out, that was their third bit of luck as it was a good draft to have a top-two pick. The same season Robert Griffin III comes out of nowhere to transform into a franchise-caliber QB during his redshirt junior year at Baylor. He won the Heisman and nearly broke the scoreboard in the Alamo Bowl, giving the 2012 draft not one but two once-in-a-generation QB prospects (the Rams' fourth and final piece of luck).

Already having a franchise QB, the Rams could ask for whatever they wanted for RGIII knowing full well someone would pay it, especially given the new CBA's cost-controlled rookie contracts. The price? Three first round picks. The Rams stumbled and bumbled their way to two first round picks for the next few drafts, it wasn't part of some grand master plan.

With two first round picks, there will be a lot of talk about the Rams trading up. However, I don't see any scenario in which that happens. It just makes no sense. Jeff Fisher knows the value of first round picks and is more than content to sit back and let the board come to him. Sure, he would love for a Jarvis Jones-type talent to fall, but he won't waste his draft capital to trade up to get someone. There just aren't any players in this draft worth trading up for after the first couple picks (and some would argue there aren't any players worth trading up for at all).

So let's take a look at the Ram's needs, and some players to fill them:

Safety: This is the team's second-biggest need after WR because Craig Dahl and Quintin Mikell are awful. The bad news: there is not a first-round talent after Kenny Vaccaro, who was gone before the Ram's first pick. The good news: it's a deep safety class and the Rams can find help for the secondary in the second or third rounds. Some thought was given to Matt Elam (Florida), but it he would be a reach at this spot.

Outside Linebacker: The Rams desperately need linebackers to put around James Laurinaitis in their 4-3 defense, but after Jarvis Jones there really isn't another OLB worth a first-round pick.

Wide Receiver/Tight End: I took a look at the Rams' pass catchers with the 16th pick, and I spent a lot of time considering Cordarrelle Patterson here (and a little bit of time considering Tyler Eifert). I considered Patterson because the Rams still could use weapons for Bradford and Patterson has a ton of potential. None of their current weapons are proven right now, and as the Packers have shown over the past two seasons you can never have too many quality receivers. I didn't take Patterson (or Eifert) because the Rams' receivers do have a lot of potential; they need to give them time and targets to find out how good they can be. It is not an optimal use of resources to potentially stunt the growth of a WR already on the roster by taking Patterson when they could fill another hole now and develop the pass catchers currently on the team.

Running Back: We talked about departed legends when we looked at the 16th pick, and Steven Jackson did an admirable job filling Marshall Faulk's shoes. But he's gone now, leaving only Isaiah Pead and seventh-round pick Daryl Richardson to run the ball. Both will reportedly have a role in the offense, and some thought was given to Eddie Lacey at this spot. A few words against Lacey though: there are enough big-bodied backs in this draft to pass on Lacy to help another position of need. With the running-back-by-committee approach every team in the league that doesn't haveAdrian Peterson is now taking, combined with the short careers of running backs, the value just isn't there to take a RB in the first round anymore.

Offensive Line: The most important signing for the Rams this offseason was Jake Long from the Dolphins. When healthy he's a premier LT. His presence allows Rodger Saffold to move to RT (a move he is not happy about). Saffold is on the final year of his rookie contract and if he plays well at RT a fat contract at the end of the year would go a long way to soothing his ego. What makes this situation interesting is the "Branden Albert" factor. Saffold did play well last year, and as all Chiefs fans are painfully aware by now, left tackles make more money than right tackles. So it makes sense he would want to be playing LT. Saffold could be traded on draft day to a team willing to play him at LT and give him a long-term deal. If that happens the Rams could take Alabama RT D.J. Fluker here to shore up the line. But since we're not speculating on trades I'll say that Long has stabilized the OL for now, so the Rams should look at other positions with their second first-round pick.

Defensive Tackle: The Rams have Chris Long and Robert Quinn (2011 first round pick) bookending the line, with Michael Brockers (2012 first round pick) and Kendall Langford (who is nice for depth, but is JAG) at tackle. There happens to be a very good defensive tackle still on the board who is big, has a quick first step, is strong against the run and can help collapse the pocket on passing downs. 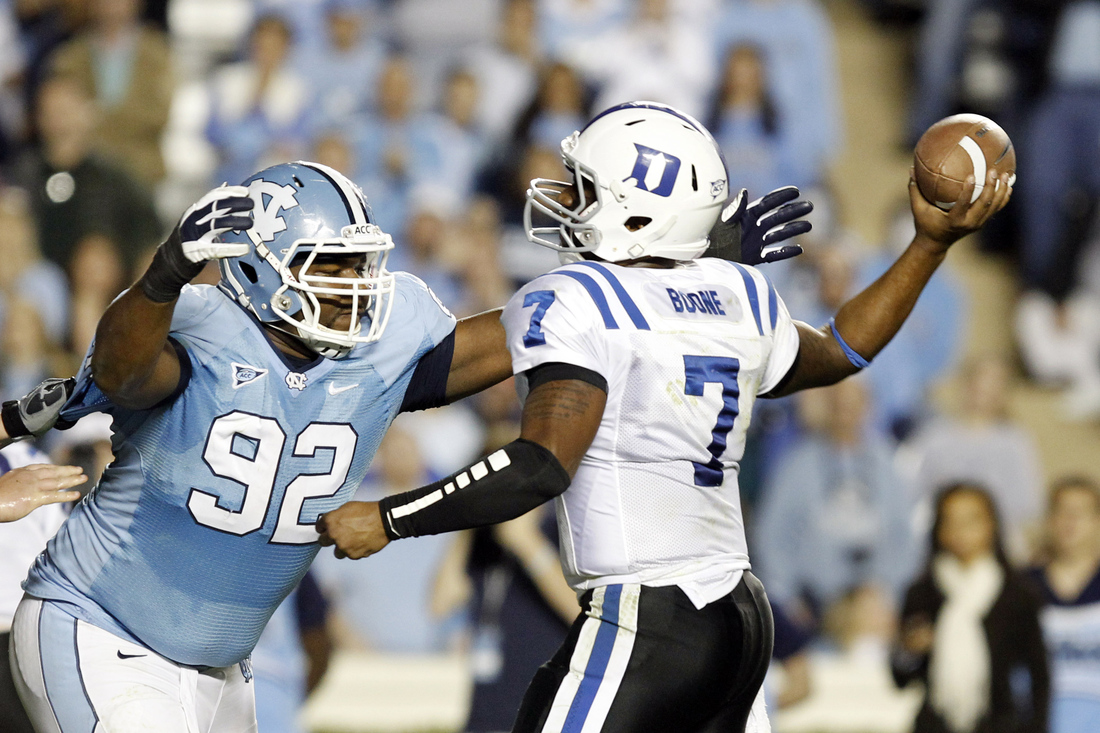 Two caveats here: first, if Kenny Vaccaro is still on the board at 22 the Rams will sprint to the podium and take him. Second, remember how I said earlier the Rams won't trade up because there isn't a player worth taking after the first few picks? There is a scenario I can see where the Rams trade up as high as the second or third pick. If Jeff Fisher absolutely falls in love with Dion Jordan he could trade up with the Jaguars, Raiders or Eagles to get him. It's highly unlikely, but Jordan is a perfect fit for their defense. If you want a shocker draft-day trade, that's one worth watching.

But back to Williams. Taking a first-round defensive tackle three years in a row may not get Rams fans excited, but Williams gives the Rams a young, very talented line to build their defense around. Look for the Rams to add a safety and an OLB on day two, and a big RB on day three.