2013 NFL mock draft with trades: Chiefs get their wish and move back

This 2013 NFL mock draft comes from Nick Jacobs of Time Warner Cable Metro Sports. The criteria for the mock draft included these three questions: 1.) Who would be the biggest impact for their football team? 2.) Does he fill a big need? 3.) Does he fit their scheme? Follow Nick on Twitter @Jacobs71.

Share All sharing options for: 2013 NFL mock draft with trades: Chiefs get their wish and move back

1. Eagles (TRADE): QB- Geno Smith, West Virginia (The Chiefs receive the 4th overall, 3rd rounder and a 2nd in 2014) I believe the volume of plays and the tempo Geno ran at WVU fits Chip Kelly perfectly. Vick isn't guaranteed long term, Foles really doesn't fit the system and Dennis Dixon isn't your franchise QB. This is a great match for both parties.

2. Jaguars: OLB- Dion Jordan, Oregon - The Jags were hoping Geno would fall to them but the Eagles were more aggressive. Jacksonville has to settle for a pass rusher. Jordan is very athletic and will grow into a disruptive defensive end with the right weight training program.

3. Raiders: DT- Sheldon Richardson, Missouri- Geno also did not fall to Oakland at three. So they have to settle for fixing their pass rush. Richardson provides them an athletic and disruptive force. Nobody gained more from MU's move to the SEC then Sheldon. He proved his dominance week after week.

4. Chiefs: OT- Eric Fisher, Central Michigan- I went with the offensive tackle that gives you the best of both worlds. Fisher is a well-balanced offensive lineman. He finishes blocks. He goes until the whistle blows. Fisher wants to dominate his man every play. He brings an attitude this OL has been missing for quite sometime.

Chiefs pick: I went with the OT that gives you the best of both worlds .... Fisher brings an attitude this OL has been missing for quite sometime.

5. Lions: OT- Luke Joeckel, Texas A&M- The Lions hurry to take their card up to the podium. They find a tackle that is the best in pass protection. He struggles in run blocking but will be one of the better pass pro tackles long term in this league.

6. Browns: OLB- Ezekiel Ansah, BYU- With Ray Horton now in charge of the defense. Ziggy gives his DC a big physical pass rusher on the opposite side of Kruger. The Browns defense just added another piece to challenge the Ravens and Steelers in the North.

7. Cardinals: OT- Lane Johnson, Oklahoma- The Cards need a franchise QB long term to develop. Geno didn't fall to them. So they need to find a tackle that can keep Palmer upright. Arizona needs some additions to the Offensive Line, so Bruce Arians gets the OT with the highest upside in this draft.

8. Bills: WR- Tavon Austin, West Virginia- It is curve ball time in our draft. The Bills need a dynamic play-maker in their new offense. A threat to go the distance every time. Austin provides them with a jack-of-all-trades.

9. Jets: OLB- Barkevious Mingo, LSU- Rex Ryan is in a dark place right now. He needs to turn around the football team this season or he will be looking for work in 2014. He needs two things: A franchise QB or guys who can get to the Quarterback. Mingo is the best player on the board who can provide him that. Although Barkley wouldn't surprise me here either.

10. Titans: DT- Shariff Floyd, Florida- Floyd didn't go to three like everyone expected but the Titans need to find an interior presence to compete against the Texans and Colts. Floyd fits a 43 system very well. He is a good three tech that can beat one on ones. I could also see offensive guard here as well. 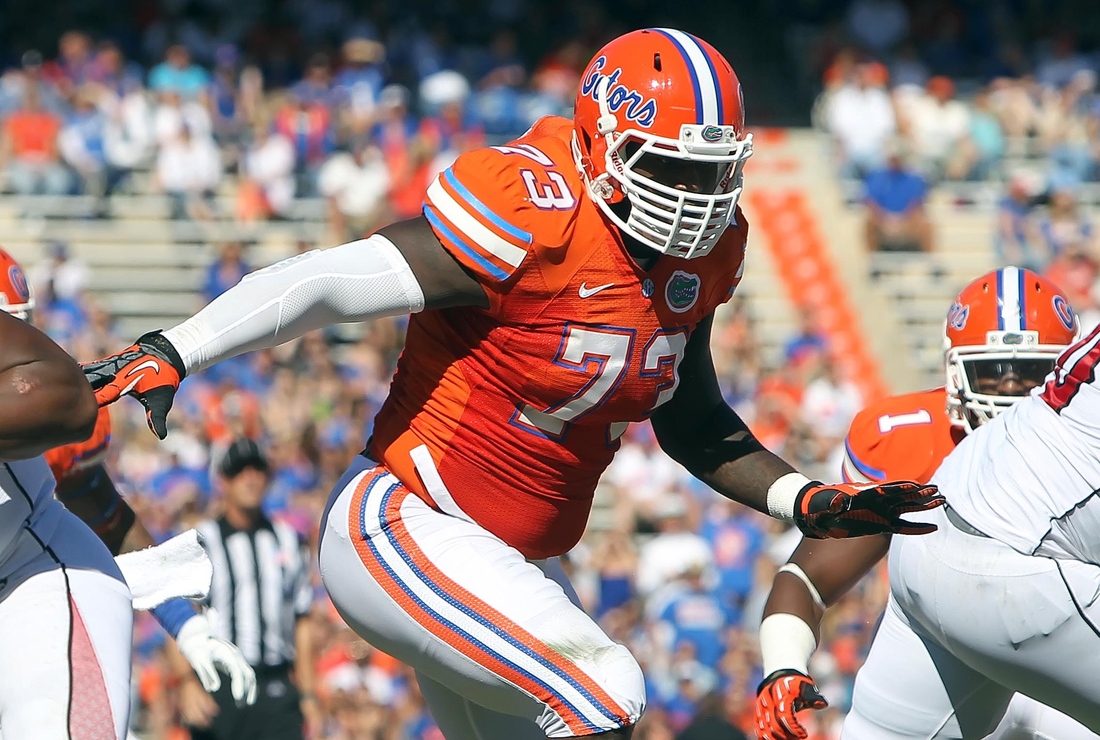 11. Chargers: OG- Jonathan Cooper, UNC- The Lightening Bolts could reach for an offensive tackle here but the new regime takes the best player on the board. SD is going to need a lot of help on their offensive line. Cooper helps give McCoy a clean pocket for Rivers.

12. Dolphins: CB- Dee Milliner, Alabama- Miami could use a left tackle. Jonathan Martin may need to stay at right tackle until his strength is ready to protect the blind side. The Dolphins are going to need to replace the two CBs they lost in the past year in Smith and Davis.

13. Bucs: TE- Tyler Eifert, Notre Dame- You may not be expect to see his the name this high. I thought about it for a couple of minutes Corner or TE? The team needs both. In the NFC South you are going against the Panthers, Saints and Falcons. You either stop them from scoring or score more. Josh Freeman really doesn't have a safety blanket in Tampa. This allows you to make a final decision on him before his contract ends.

14. Panthers: DT- Star Lotulelei, Utah- His perceived heart condition is going to be a cause for concern. I think it will keep him out of the top ten. He would be a good fit in Carolina. He does a great job at maintaining the line of scrimmage. And when is he motivated, you won't stop his bull rush.

15. Saints: OLB- Bjoern Werner, Florida State- Now that the Saints are going to a 34 scheme. They are going to need some backers to get after the QB and a Nose Tackle. They can find a NT later. So take the pass rusher now.

16. Rams: OG- Chance Warmack, Alabama- With the moves made in the NFC West by the 49ers and Seahawks. The Rams need to do everything in their power to make sure they protect Bradford. They could take the best WR at this spot. I think Fisher will work on his OL. It worked for the 49ers.

17. Steelers: WR- Cordarrelle Patterson, Tennessee- Pittsburgh was afraid the Rams would take him. He is still on the board and they are rather excited. With the loss of Mike Wallace and the potential loss of Emmanuel Sanders. Now is the time to take a WR to compliment Brown.

18. Cowboys: S- Kenny Vaccaro, Texas- With the Tampa 2 you need corners, a pass rushing DL and safeties who can cover half the field. The Cowboys better take the safety first.

19. Giants: OLB- Arthur Brown, K-State- The Giants could use some speed at the backer position. Brown is a sideline-to-sideline backer that has serious speed and some pretty good instincts to go with it. I think he is a play-maker New York needs.

20. Bears: OT- Menelik Watson, Florida State- I felt he fit the Bears need on the offensive line. I know they have Bushrod but they need another OT with some athletic ability. Watson would provide them that. 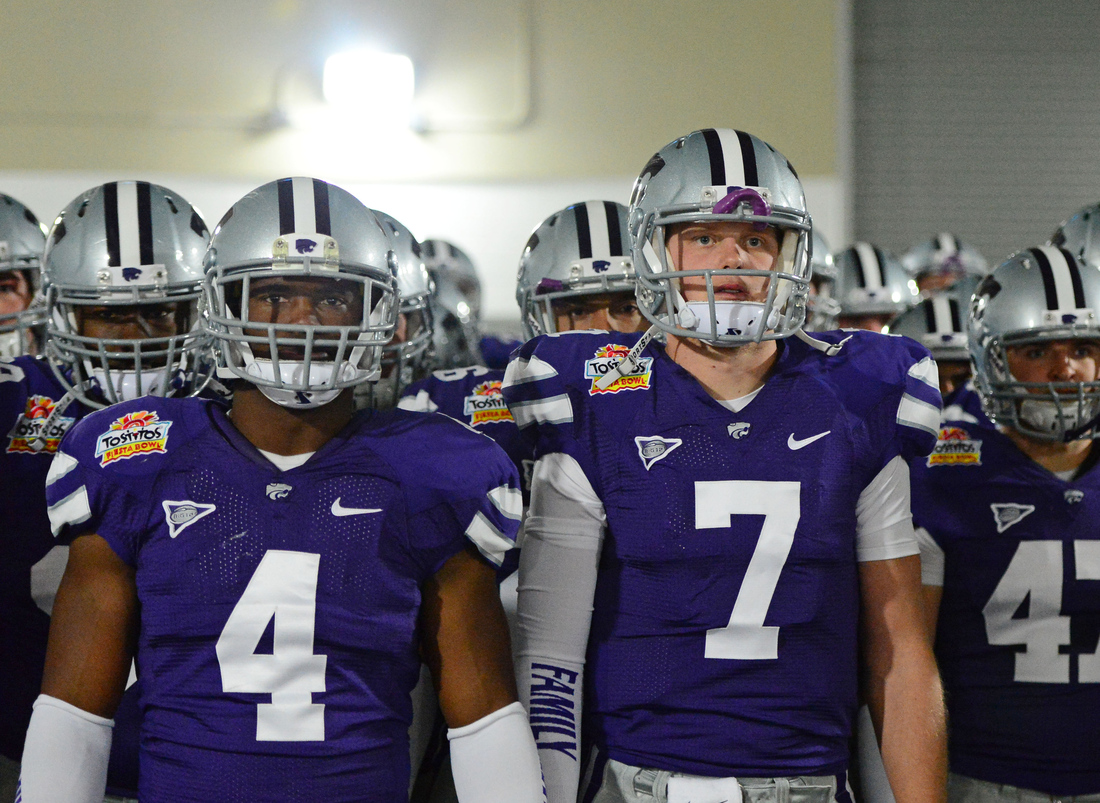 21. Bengals: LB- Alec Ogletree, Georgia- The Bengals need a backer. He would provide them one of the better ones in this draft. I expect his stock to drop on draft day and I see him landing here.

22. Rams: OT- DJ Fluker, Alabama- Yes another Alabama offense lineman. Again, Fisher likes maulers on his OL. This would be a huge upgrade for this team and allow them to stay competitive with the 49ers and Seahawks. Both teams have forced the issue. I think Fluker gives you a guy who can play RT or Guard. I could also see Eddie Lacy or a WR here.

23. Vikings: CB- Xavier Rhodes, Florida State- The Vikings need help in their secondary. They do play in the NFC North against the Packers, Lions and Bears. You need to stop the pass so you can get the ball to AP.

24. Colts: OLB, Datone Jones, UCLA- The Colts addressed their Offense last year. Now is the time to start building the keys to a 34 Defense. Datone Jones is a mismatch nightmare. He can play DE, he can play OLB, and he could rush on the DL in Nickel. The Colts need to find a NT, ILB, and OLB in this draft. Datone is the best on the board at this point.

25. Cardinals (TRADE): QB- Matt Barkley, USC- The Cardinals found their franchise tackle in Lane Johnson. Now is the time to be aggressive and take your franchise QB. With Palmer in place this allows them time to groom Barkely in Arians system. (The Vikings receive the 38th overall in the 2nd and the 103rd overall in the 4th)

26. Packers: RB- Eddie Lacy, Alabama- The Packers have lacked a legit running back for quite sometime. Lacy would allow them to have a physical back to compliment their offense. You spread teams out with your offense then allow Eddie Lacy to go off tackle or in a draw. You will be moving the chains a lot.

27. Texans: WR- DeAndre Hopkins, Clemson- Houston needs to find a compliment for Andre Johnson. I think Hopkins provide them a solid WR that could take pressure off of Johnson.

28. Bills (TRADE): QB- Ryan Nassib, Syracuse- Doug Marrone got very nervous when the Cardinals traded up and is afraid they won't get their QB of the future if they wait until the 2nd round. It is not everyday you can get a rookie QB who has already played in your system. So the Bills called the Broncos to get a deal done. (The Broncos receive the 41st pick in the 2nd, and the 105th pick in the 4th)

29. Patriots: DE- Margus Hunt, SMU- The Patriots have needed to address their defensive line for quite sometime. Hunt gives them a physical DE that could be their less athletic version of JJ Watt. Wilfork will thank you.

30. Falcons: CB- Desmond Trufant, Washington- The playoffs showed how much work this team needs in their pass rush and their secondary. Trufant is a physical and aggressive corner but can also play off. I think he fits the Falcons scheme really well.

31. 49ers: NT- Jesse Williams, Alabama- With Hunt off the board, the 49ers need to find some impact on their defensive line. A new nose tackle will do just fine.

32. Ravens: ILB- Manti Te'o, Notre Dame- The Ravens biggest need still remains ILB. Te'o has seen a lot of adversity over the past handful of months and it will likely hurt his stock. Most teams will not want the Tim Tebow type circus to come to their town. The Ravens will take the best player on board regardless, and that is Te'o. 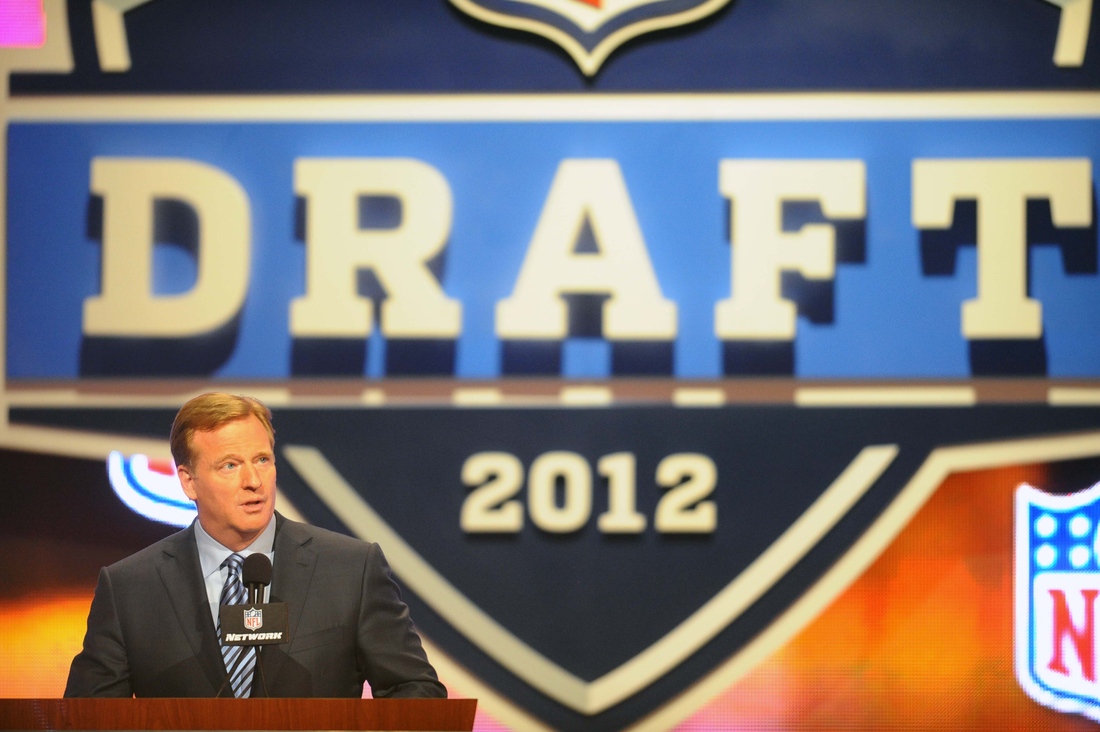 I will even give you a bonus Chiefs fans. The four teams I could see trading with Kansas City for the number one spot.

1. Eagles- If Chip Kelly wants Geno Smith or Dion Jordan he needs to move up to one. I see the Jaguars snatching up one of the two. So if you want to guarantee yourself the player, move up to one.

2. Cardinals- They may want to find their franchise QB now or take the best tackle in the draft. The Cardinals would need to pony up a lot for this jump but it may pay off for KC. I think this is the last spot KC could move back and get Fisher or Johnson.

3. Jets- Rex Ryan is in his lame duck season. He needs to excite the fan base and save his job. With the West Coast scheme Marty Mornhinweg will be implementing, Geno could be a great fit for it. And if I'm GM John Idzik, I get my franchise QB now. Rex leaves after this season. I could bring in Darrell Bevell as HC, who did pretty well with Russell Wilson.

4. Dolphins- The Dolphins have the ammo to move up to one. With the 12th overall and two second round picks. They could trade all of that for the top tackle in the draft. I don't see a quality left tackle dropping to 12.