They often say that as you get older, your mind begins to slip a bit. Oh sure, the Japanese will slip you some sudoku puzzles, and tell you it'll keep your mind sharp, but who trusts the Japanese anyways, have you seen what they consider entertainment?

So you'll have to forgive Giants head coach Tom Coughlin, who at age 66, couldn't help but feel like 2012 was yet another case of deja vu. The New York Giants are the Punxsutawney, PA of poor ole Tom's Groundhog Day, with each flipping digit of his understandably old school alarm clock acting as yet another un-timely interception by Eli Manning or mind numbing fumble by the rookie David Wilson, while the lyrics to "(We're Having A) Heatwave" come blaring out the little speakers every morning. You can't help but feel for Coughlin who watched the Giants roar out of the gates to a 6-2 start, only to watch those clutch 3rd down conversions start turning to into drive killing interceptions, with the low light being a 34-0 loss to the Atlanta Falcons. What started off as Coughlin showing the team clips of Lethal Weapon movies early on the keep them loose, turned into Tom constantly deadpanning his Danny Glover impression after every game.

One of the highlights of the season was Martellus Bennett, who came into New York coming off four seasons in Dallas, where he made strides as a blocker, but never developed as the offensive weapon he was so fond of rapping about (by the way, what rhymes with Cutler?). In New York, while he didn't light the world on fire, Bennett did finally make a solid offensive contribution, catching 55 passes for 626 yards and five touchdowns, which coincidentally were his first since 2008. Bennett went chasing the money off to Chicago this offseason, and the remaining tight ends on the Giants roster aren't exactly a murderers row of talent. Sure, Bear Pascoe has a cool name, but that's really all he's got going for him, and the rest of the guys on the team are about as intimidating as Ned Ryerson. It just so happens that the best tight end in the draft is still available at pick number 19.

But then you realize something special about this draft. Something that causes you to ask yourself the following question: What would you do if you were stuck in one place and every day was exactly the same, and nothing that you did mattered?

You would do exactly the same thing you've done every other time the draft rolls around, and you happen to be picking for the New York Football Giants! Draft a pass rusher!

With the 19th pick in the draft the New York Giants select... 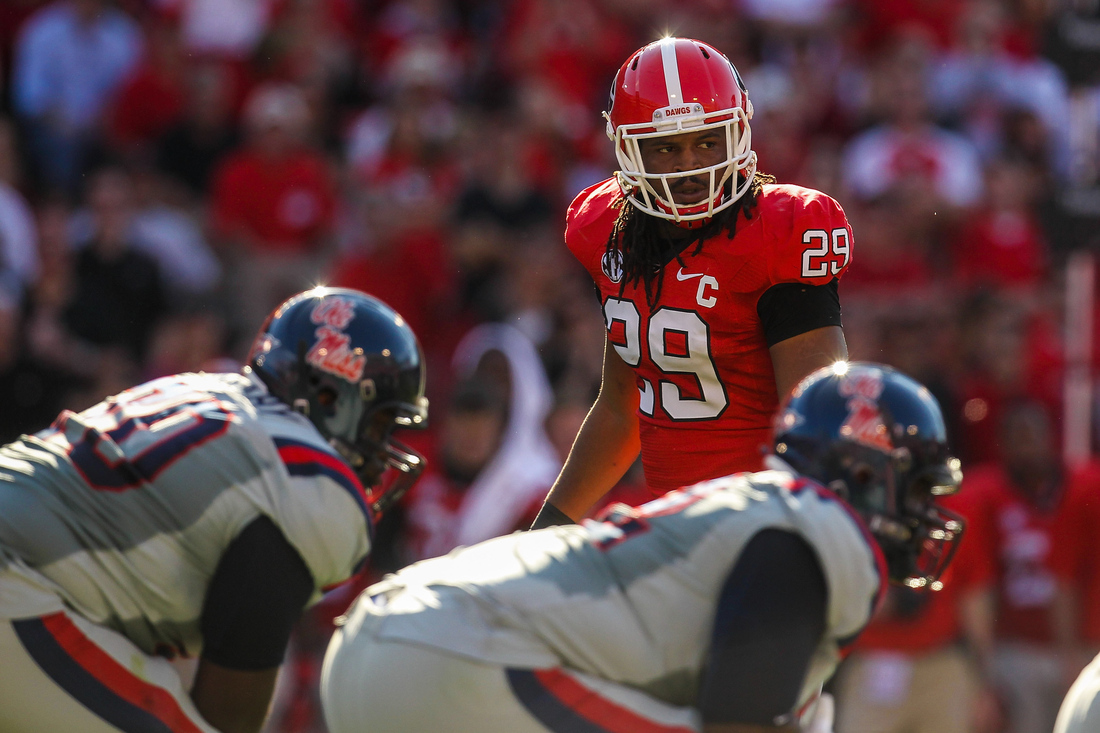 Now, I'll be honest with you, I haven't seen Tom Coughlin this happy since he bought a Furby a few years back and excitedly proclaimed he was going to bring it home that night, get it wet and feed it after midnight. (On a side note, I've also never seen him so sad as the following day, when he dragged a broken furby doll around with him, soaking wet and chocolate smeared all over it's mouth).

I know it's a cliche for the Giants to draft pass rushers, but as recent history has shown, the Giants win when their pass rush is running on full cylinders. In 2007, they recorded 53 sacks, and in 2011 rang up another 50. When the team slumped to an 8-8 record in 2009, they only notched 32 sacks, and as they slid into another embarrassing finish this past season, their final tally was only 33. And the defense got torched repeatedly. With Osi Umenyiora on his way out of town, and Mathias Kiwanuka about as effective as Punxsutawney Phil behind the wheel of a car, Jones will be able to slide in at OLB and provide a strong pass rush, and make it easier for those around him, such as Tuck and JPP to regain their edge and keep teams running scared.

Now, I know there has been talks of Jones' medical history, and that he is a "plays like Tarzan, practices like Jane" type player. But this is the kinder and gentler Tom Coughlin we are talking about here. He's no longer running around trying to create a gremlin-like army of furbies, who can be programmed to show up to every meeting 5 minutes early. Now, he mostly sits on the sidelines, glaring at Chris Snee, and trying to remember who Johnny Carson is having on the Tonight show that evening. And let's be perfectly frank, we only care about what happens during the game. If he's not a huge fan of practicing, who can blame him? I mean, we're talking about practice here. Practice! Not the game, that he goes out there and dies for, and plays every game like it's his last. We're talking about practice here, I mean, how silly is that? We ain't talking about the game, we're talking about practice, man. And Jarvis Jones is going to light it up every game this season.