The Kansas City Chiefs will need help along the offensive line in the 2013 NFL Draft, which opens up in two weeks. Should they take a chance on a pass rusher instead?

Share All sharing options for: Does drafting Dion Jordan make sense for the Kansas City Chiefs?

Last week, I wrote about how the Kansas City Chiefs are going to take Luke Joeckel with the first overall pick in the 2013 NFL Draft, like it or not. I still believe that. I can't see anyway the Chiefs pass up what they believe to be a sure-fire left tackle for the next 10 years, considering all the signs pointing to Branden Albert getting traded and the release of Eric Winston.

However, I'm willing to look at this from another angle. Why? Because it's the middle of April and what is a man supposed to write about?

Poll: Will it be offense or defense with the No. 1 pick?

So let's say the Chiefs surprise most of us and sign Albert to a long-term deal. At that point, does it make sense to take Joeckel, or Eric Fisher, and make them the starting right tackle? No. It would be crazy to select a right tackle with the top pick in the draft.

So what to do? Kansas City is likely trying to trade down, but for arguments sake we will say it can't happen. Maybe the Oakland Raiders are happy with Matt Flynn and perhaps the Buffalo Bills are set with Kevin Kolb. Most times a sentence with Kevin Kolb and happy don't go together, but we're talking about the Bills. I'd bet the house they're satisfied being trash. The Philadelphia Eagles and Arizona Cardinals are also possibilities, but again, I'm going off the premise it's not going to happen.

I can't enviosion Kansas City taking a defensive lineman. The team has already invested a ton of money in Mike DeVito, Dontari Poe and Tyson Jackson. How much money do they feel it's worth to tie up in a 3-4 lineman who isn't likely to start as a rookie?

Now we are left with Dion Jordan, who has a vast amount of potential, but the bust meter in my head is also exploding. The kid has a ton of raw ability, but that's exactly what it is, raw. Anybody can sit there and say they know he's going to be a star, but they would be lying. They, and we, have no idea. Jordan could be the next DeMarcus Ware. He could also be the next Vernon Gholston. 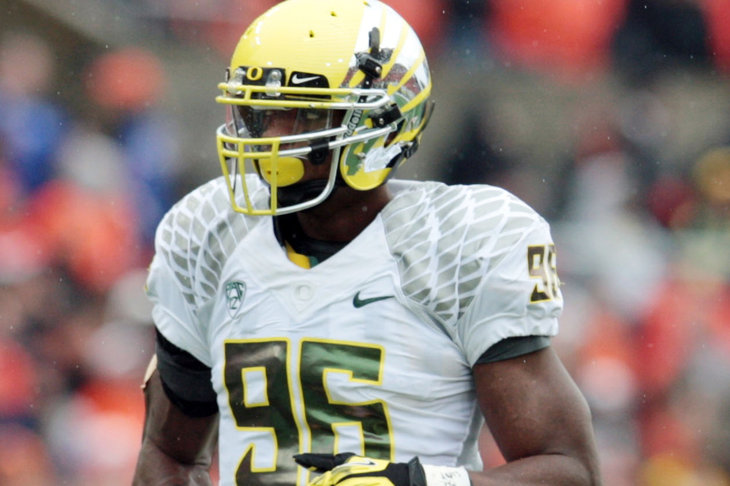 In his time with the Oregon Ducks as a senior, Jordan racked up five sacks. Not the most impressive number on the surface, but when you consider the myriad of things he was asked to do in that scheme, it's not bad. Jordan can cover and run like a deer, all positives. My big concern is the man's size. At only 240 pounds and 6'6'', that could be an issue. Understand, he could bulk up to 250 or so and be well-built, but it's a risk because he isn't used to playing at that weight.

Does his body begin to break down? Does he lose half a step? All of this needs to be thought about.

Personally, I would stay away from Jordan unless the Chiefs feel they have no other options. He's a luxury pick with Justin Houston and Tamba Hali on the outside. The only way it makes sense is if you move him inside next to Derrick Johnson, but can he make that transition? That's the $25 million question.

If I'm John Dorsey, I trade Albert if you can get a second round pick and a later pick, and start trying to trade back in the first round.

If he can't, it should be mighty interesting come April 25 at Radio City Music Hall.

Chiefs meet with a safety from Oregon

Joeckel vs. Fisher, an analysis