The 2013 Arrowhead Pride NFL mock draft continues. AP user ChiefMojo is representing the Pittsburgh Steelers with the No. 17 overall pick...

It was a disappointing season for the Pittsburgh Steelers who not only failed to make the playoffs for the first time since 2009, but watched their division rival, the Baltimore Ravens, win Super Bowl XLVII.

Both Baltimore and Cincinnati fielded playoff teams out of the division, while the Steelers limped home after an injury-plagued 8-8 season. With a veteran roster getting older by the year and a new offensive coordinator (Todd Haley... remember him?), the Steelers never got off on the right foot entering the 2012 season.

This proud franchise led by the Rooney family has a lot more holes than one expects.

The Steelers lost their top wide-out and play maker in Mike Wallace to Miami this off-season. They still do have the likes of Antonio Brown who was re-signed last off-season. They could look into drafting a wide-out/tight end in round one with the likes of Cordarrelle Patterson from Tennessee, Keenan Allen from California, Tavon Austin from West Virginia or possibly even Tyler Eifert from Notre Dame.

One thing to keep a eye on is the height of the wide-out possibly selected. The Steelers are lacking 6'0" plus receivers on roster and Big Ben has brought this to the attention of the Steelers front office. Emmanuel Sanders signing a offer sheet with the New England Patriots for 1-year, $2.5 million could also alter the Steelers plans quickly. Either the Steelers match the offer within the next five days (they are able to match under the cap with very little to spare) or they receive the Patriots third rounder. The team needs to take in consideration they need cap space to sign their rookies from the draft. Sanders currently counts $1.3 million against the cap and the team would only have to come up with $1.2 million more to match. So restructuring of contracts or releases outright could be in order regardless of the Sanders decision. If the Steelers go wide receiver, I assume Patterson is at the top of the board.

Another big offensive position to fill is runningback with the loss of Rashard Mendenhall to the Cardinals. They still do have a running duo of Isaac Redman and Chris Rainey that has good speed but lacks the quality bigger back aspect of Mendenhall. With that said I think they could find a quality runningback in round 3-4 with someone like Montee Ball from Wisconsin, Le'Veon Bell from Michigan State or even taking a gamble on the recovering Marcus Lattimore from South Carolina.

But it wasn't the offense with the biggest holes but the aging defense, namely the pass rush and the secondary.

If the Steelers look to replenish/replace one of the safety positions then one will look no further than the University of Texas free safety Kenny Vaccaro. Vaccaro is a safety that excels inside the box against the run but also plays well in space against the pass. He is probably very similar to Eric Berry's style in many ways. Other options could be Matt Elam from Florida, Eric Reid from LSU or Jonathan Cyprien from Florida International.

When it comes to options at the outside linebacker spot we find the likes of Jarvis Jones from Georgia, Barkevious Mingo from LSU, Ezekiel (Ziggy) Ansah from BYU, and Cornellius (Tank) Carradine from FSU. Mingo, Ansah and Carradine are considered freak athletes while Jones may not be quite the athlete but a very instinctive play maker none the less. Both Jones and Carradine have injury concerns to overcome, which may affect their draft status. Ansah and Carradine intrigue me with their size/athletic ability. Mingo falls into the same category but in this draft he is already off the board. Of note, Jones visited Pittsburgh on Tuesday April 2nd. I have a feeling on draft day that Jones could be a serious possibility at No. 17.

So if I were GM Kevin Colbert, which direction would I go? One can't go wrong deciding between either a wide receiver or a outside linebacker. 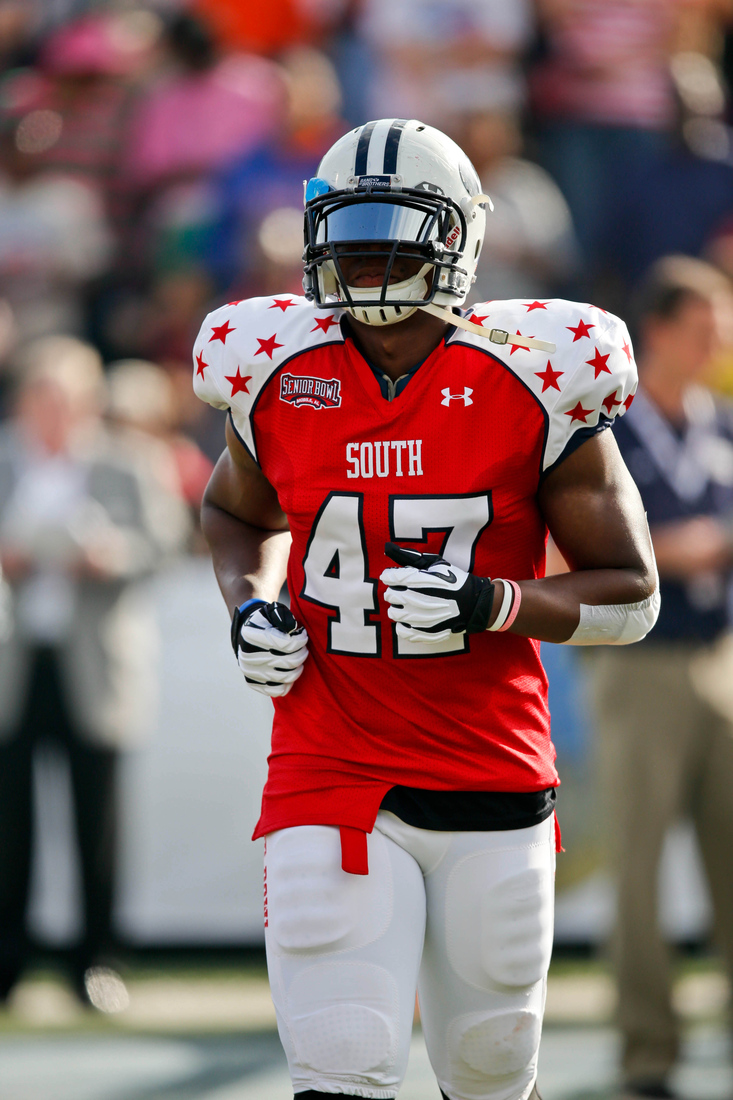 Ansah's extreme upside to go with his already freakish athletic ability makes this a fairly easy pick in my opinion. Not to mention to find him still available in this draft was a nice gift. Ansah has only been playing organized football for a few years. Ansah tried out for the basketball team at BYU in 2008 and 2009. After failing both times, he joined the track team but left at the end of the 2009 season and joined the football team. The Accra, Ghana native has grown leaps and bound in just those few years. He still has stamina concerns to go with his lack of experience but a team like the Steelers may be willing to take a chance on a 6'5", 270-pound freak hoping he turns into a future Hall of Famer for the Steel Curtain.