Gone are the days of Dick Vermeil, Kurt Warner, Isaac Bruce, Torry Holt, and especially Marshall Faulk. The Rams have muddled their way through a decade of mediocrity since, primarily for two reasons.

First, the Rams could never find the right man to lead the team after Dick Vermeil left (to revive another storied-but-downtrodden franchise). Since Vermeil, the Rams' head coaches have been a long list of "who ain'ts".The good news is Jeff Fisher looks like the right man for the job, guiding the team to a 7-8-1 record in his first year.

The second reason is the Rams could never replace the departed franchise icons. For as good of a coach as Vermeil was, the players were the ones that made the offense (and team) go. And go. And go and go and go. Marc Bulger replaced Warner and was (mostly) the starter through the 2009 season when the Rams were the worst team in the NFL. The Rams drafted Sam Bradford number one overall, and he appears to be the future at the position (more on him in a minute). The wide receiver situation, however, has been an unmitigated disaster.

"Potential" is the word that best describes the Rams current crop of receivers. Givens showed some last season, with 42 catches for 698 yards, good for a 16.5 yards/reception average. The Rams' second biggest free agent signing this year, Jared Cook from Tennessee, only caught 122 passes for 1,600 yards in his three seasons as the Titans starting TE. Kendricks has caught 70 passes for 871 yards in his two season with the team (42 of those catches and 519 of those yards came last year). Quick is the Rams' version of Jonathan Baldwin, who only caught 11 passes for 156 yards last year. Two of those catches were TD's, however, so it's possible the large-bodied Quick (6'3", 220 lb.) turns into a quality possession receiver and red zone target. None of these guys are established, they're all just "could be's".

Ironically, the Rams' two best WRs last year were not drafted by them. Danny Amendola (undrafted FA signee) spent several injury-plagued seasons with the team, but was very productive when healthy. The Rams traded for Brandon Gibson in 2009 and he led the team in TD's last season. Naturally, Fisher let both of them walk in free agency.

Now back to Bradford. Bradford had a pretty stellar rookie campaign, throwing for 3,500 yards and 18 touchdowns while completing exactly 60% of his passes. He then suffered the dreaded sophomore slump, throwing for 2,100 yards and 6 TD's, only completing 53% of his passes and sitting out the last six games due to a high ankle sprain. He was resurgent last year, throwing for 3,700 yards and 21 TD's, and his completion percentage spiked back up to 59.5%. He has three years left on his 6-year, $86 mil rookie contract, and the Rams need to be certain he is the future given that the price tag for even a mediocre starting QB with no playoff success is now $100 million. Up until now, you could make the argument he never had anyone to throw to, much like Blaine Gabbert in Jacksonville (by the way, not even Wikipediathinks he's an NFL player). That should no longer be an excuse; it's time to find out what Bradford can do given quality receivers. 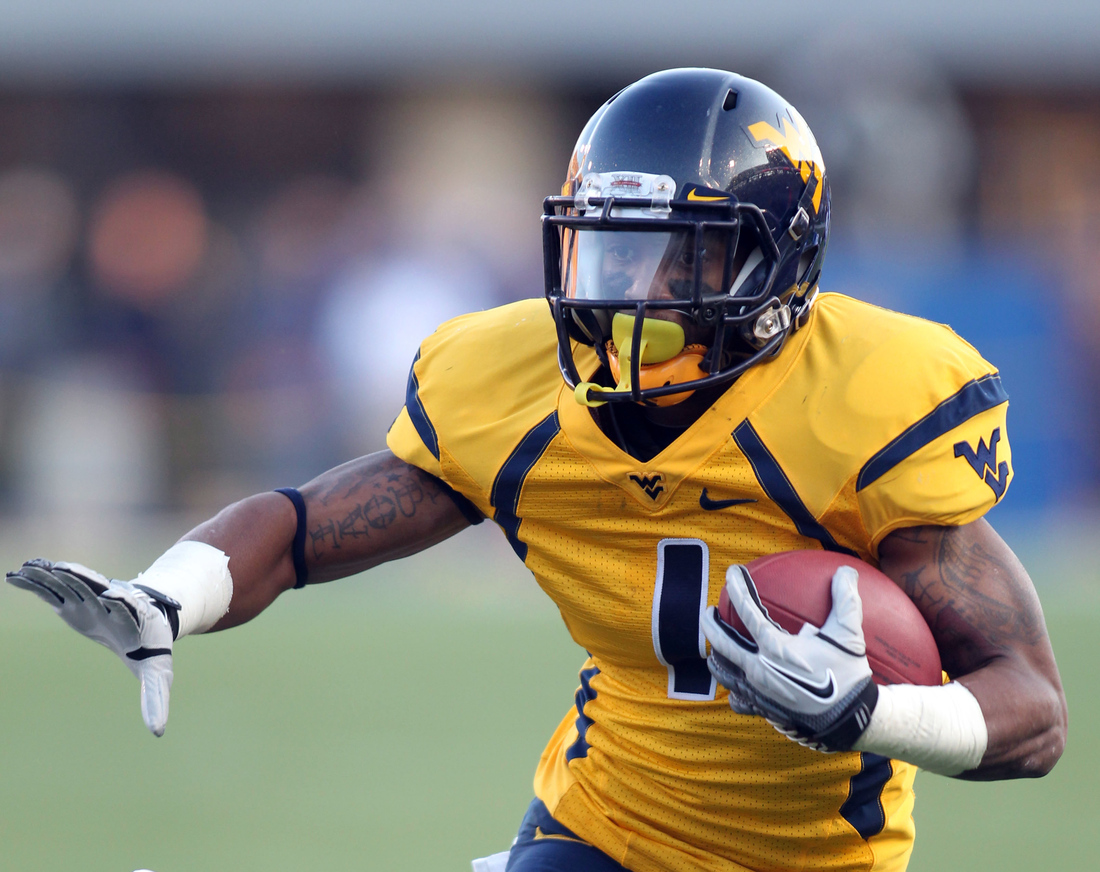 Austin is a home-run threat every time he touches the ball, and will probably be an upgrade over Amendola. He's Percy Harvin 2.0 and will be the Rams' best receiver the instant he sets foot on the practice field. He'll line up in the slot and give defensive coordinators all kinds of fits. I was worried there would be a run on WR's after Arrow Dread pulled an Al Davis and Darrius Heyward-Bey-ed the Bills' choice at eight, but things calmed down and the Rams got the best WR in the draft at their position of greatest need.