The 2013 Arrowhead Pride NFL mock draft continues. AP user GenericBrand is representing the Jacksonville Jaguars with the No. 2 overall pick...

The NFL is, more than ever, a results driven league. More and more first time coaches and new coaches, and even front office staff, are given an ever shrinking window to put a winning product on the field. Since 2008, 13 out of 21 first time head coaches have been fired or replaced within four years of being hired and five out of the eight that weren't areon the proverbial "hot seat". Also, four more second time head coaches also got the axe within the same time frame, three of those within one year of their hire date.

Names like Mike Smith and Jim and John Harbaugh and to a degree Jim Schwartz have avoided that fate mainly because they have one thing in common: a quarterback.

Quarterback is the most important position on the field for any NFL team. The NFL is a passing league and there has become a pressing need for a top flight QB. If you don't have a top flight QB, you need to find one otherwise you become another statistic in the "fired first timers" club. Lucky for the QB needy clubs, QBs coming out of college and more and more ready to come out and contribute immediately because of the improved development at the college level.

Gus Bradley takes over a team with a huge question mark at the most important position on the field. Currently in his quiver the only arrows he has is failed first rounder Blaine Gabbert and inconsistent second rounder Chad Henne, who have both directly contributed to 2 of those 21 first time head coaches being fired already. That doesn't exactly seem to be a good solution to Bradley's situation.

Bradley has seen first hand, in Seattle, what a difference maker at QB can do. He watched a team full of talent flounder with QBs like Tavaris Jackson, Matt Hasselbeck and Charlie Whitehurst turn into an instant contender with a game changer like Russell Wilson.

With the second pick in the 2013 NFL draft the Jacksonville Jaguars select....West Virginia QB Geno Smith. 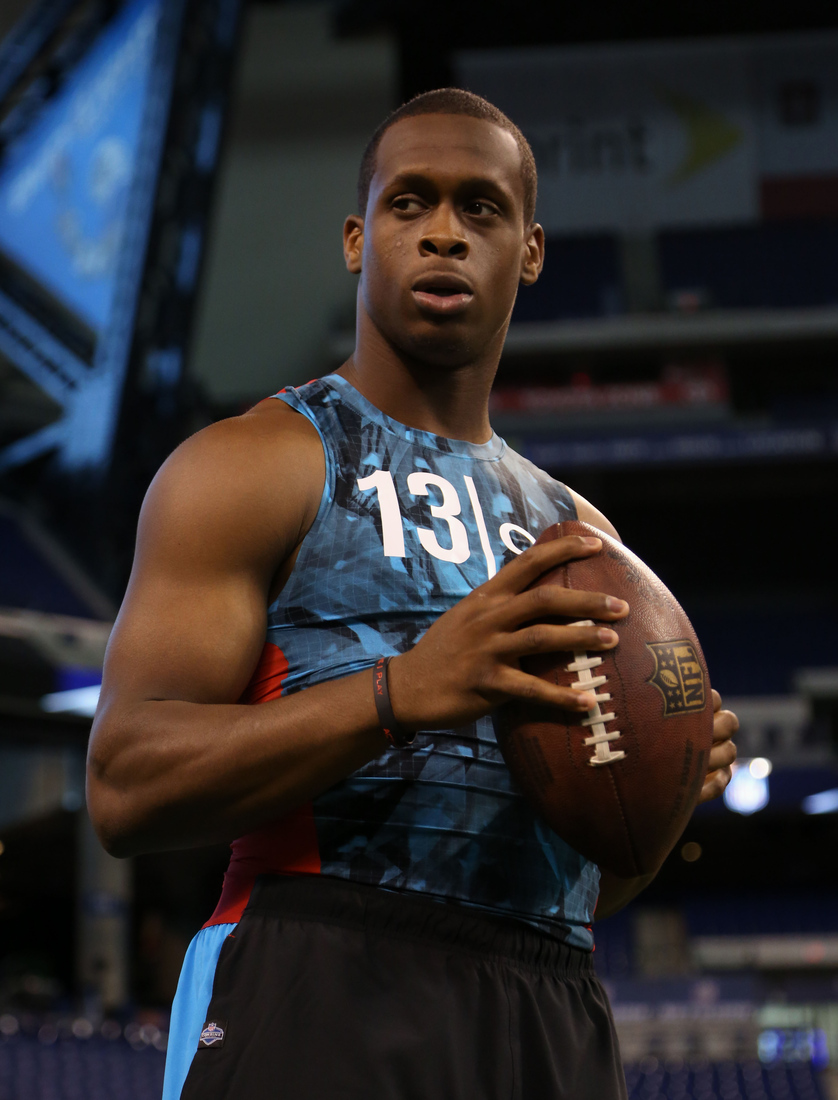 Geno Smith comes out of college as the top rated QB and has fallen to them at no extra cost or mortgaging their future by trading up like some teams have in the past. Geno, should remind Bradley of the guy who was under center for his team last year. A QB that can have an offense built around him to take advantage of his strengths and minimalize his weaknesses, one that can use his athleticism, create excitement on and off the field, put people in the seats and most importantly for Gus Bradley, put wins in the win column.

Playing it safe with bandaid solutions by the name of Henne, Gabbert, Cassel, Orton, Fitzpatrick, Quinn and Palmer will only turn you into another statistic in that group you don't want to be in. Rolling the dice and taking a chance on someone who can potentially change your franchise and your career is definitely a risk but in today's NFL it's the only way to make your mark.