The release of Eric Winston makes it official: the KC Chiefs 2012 class of free agents were a bust. From Winston to Peyton Hillis to Stanford Rout to Kevin Boss, the Chiefs aren't getting what they thought out of their 2012 free agent class.

Ah, hindsight. If only I had more of you at the appropriate times. Like the Kansas City Chiefs 2012 free agent class. Almost everyone thought the Chiefs did a solid job in free agency last year. Picking up Eric Winston was the best signing, Stanford Routt was a shrewd signing and Peyton Hillis and Kevin Boss were set to contribute to the Chiefs offense. 99 percent of you approved of the Eric Winston signing while 91 percent said the Boss signing was a good move. Those numbers are 80 percent approval for the Hillis signing and 60 percent approval for the Routt move.

Back then I wrote of these moves: "The Winston signing is as big as any GM Scott Pioli has made since coming to Kansas City while Quinn, Hillis and Routt fill clear needs. Boss is potential insurance for TE Tony Moeaki. All the moves make sense so far, at least to me."

And back then we graded the moves: 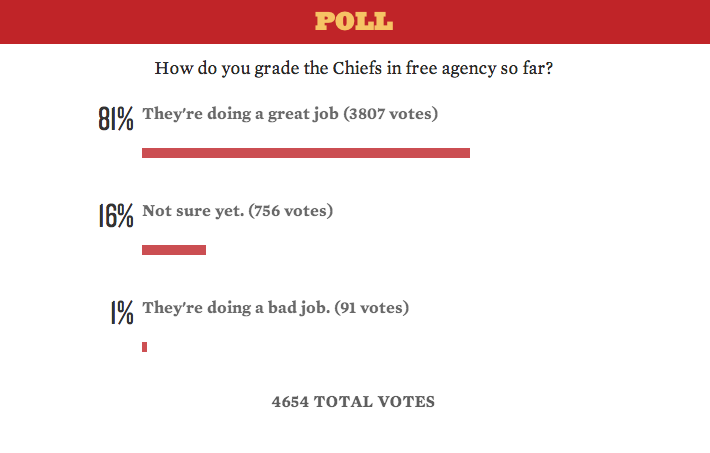 Of course it was all a bust.

Winston spent his one season calling out Chiefs fans for the Matt Cassel injury / cheering incident, which still has a surprisingly large number of fans down on him. He has since been cut one year into his four-year deal, due to what he calls "philosophical" reasons.

Peyton Hillis was hurt in the first month of the season, and never really caught back up. He never made an impact. We saw him as the 2010 Thomas Jones, meaning he could hit 800-plus yards in the Chiefs offense. He had 309 yards instead. It's unlikely he will be back with the Chiefs.

Boss suffered a concussion in Week 2 and never played again the rest of the season. He, too, has been cut.

Routt was a major bust. For some context, the Chiefs signed Routt before free agency, and before Brandon Carr had signed a $50.1 million deal in Dallas. Thus, fans that were upset with Carr's exit could reasonably wonder if Routt's signing contributed to him leaving.

The same goes for the 2011 class is similar. Steve Breaston is gone. Kelly Gregg and Le'Ron McClain lasted one year, but they were serviceable at times. Brandon Siler and Casey Wiegmann also contributed.

Just your annual reminder that the great personnel moves the Chiefs make next week may not be so great next year.

Glenn Dorsey could be back?

The history of No. 1 picks