The 101 Awards, which hand out their own AFC and NFC player and coach of the year awards, among others, took place in Kansas City on Saturday night and Peyton Manning, Peter Carroll and others were on hand for the event. Lots of people were there which meant lots of pictures. Read on for a recap.

What are the 101 awards? 101 media members voting on year-end NFL awards. And it all takes place at the Westin in Kansas City.

Gearing up for the NFL 101 gala tonight in KC, the Oscar awards of pro football!

"This banquet is the premier banquet in the NFL and you folks in Kansas City do it right" #PeytonManning. #101banquet

But the 101 Awards aren't just an NFL thing. It's a Chiefs thing, too. From left to right, that's Trent Green, Andy Reid and John Dorsey kicking things off. 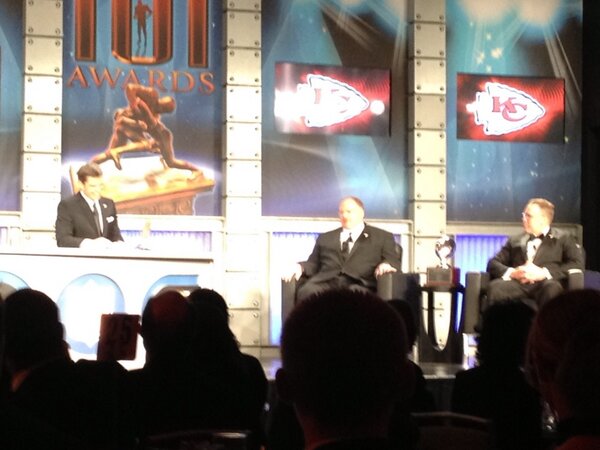 The Chiefs announced that safety Gary Barbaro would be entering the KC Chiefs Hall of Fame. 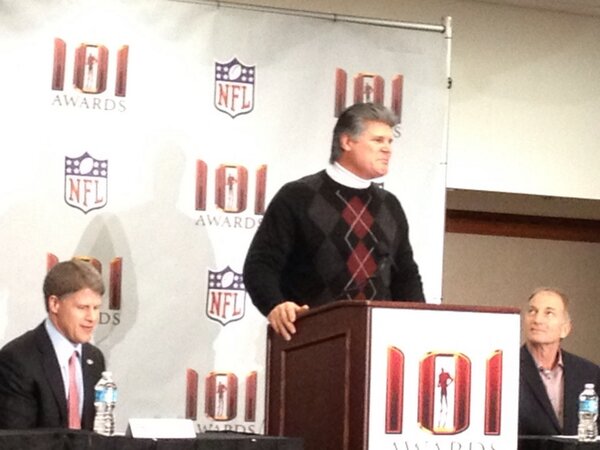 Clark Hunt: "On behalf of my family and the entire Chiefs organization, it is an honor to announce Gary Barbaro's election into the Chiefs Hall of Fame. Gary had a remarkable playing career. He was a leader and a ball hawk who posted impressive numbers in his seven seasons with the Chiefs that classify him as one of the finest defensive backs in Chiefs history."

Dontari Poe was on-hand to accept the Chiefs rookie of the year award. 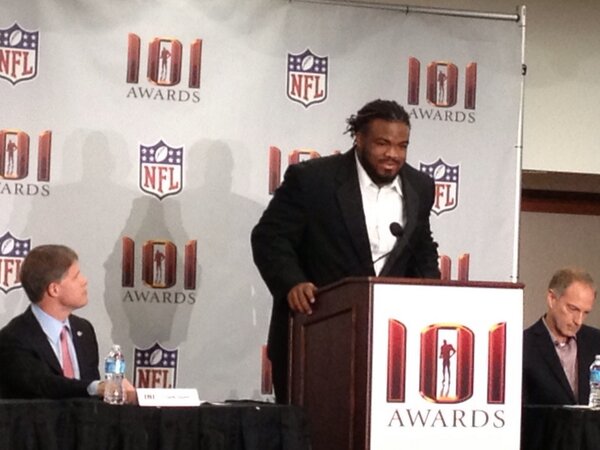 Dontari Poe: "I'm very grateful to be joining this prestigious list of players that have won the Mack Lee Hill Award in the past. To even have my name listed among players like Jan Stenerud, Derrick Thomas, Tony Gonzalez and many other current and former Chiefs greats is an honor. I'd like to thank my teammates and the Hunt family for giving me the opportunity to join this proud franchise. I'm looking forward to many great years as a member of the Chiefs."

Jamaal Charles was named Chiefs MVP for the third time. He wasn't there, so here's a blurry picture of him at the awards two years ago: 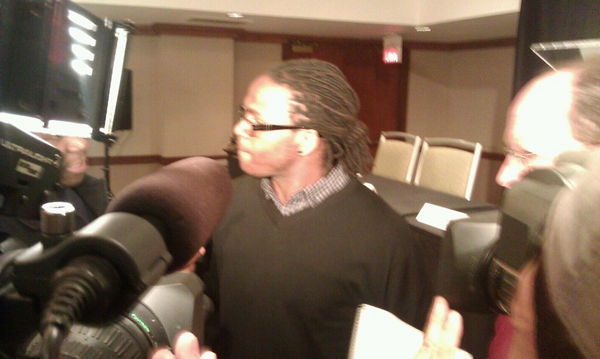 Jamaal Charles: "It is a great honor that my teammates selected me for this award. I have a number of people to thank for my success this past season, including my offensive line. They did an excellent job up front and never gave up, even in tough circumstances. This award is really a tribute to them as well. It is a blessing."

Other NFL stars were there. Like our nemesis ... Peyton Manning.

Considering the playoff losses to Indy, I don't care for Peyton. But he did come here straight from a USO tour in Germany.

Denver Post: "He flew from Germany to Washington D.C., then arrived mid-afternoon today in Kansas City, where he will receive The Kansas City Committee of 101 AFC Offensive Player of the Year Award tonight. It's the seventh time Manning has received the award, a record, and he has showed up to personally accept every time. His former University of Tennessee offensive coordinator David Cutcliffe was to present the award to Manning tonight."

"One thing I learned from the military is that they're on time," Peyton told the Kansas City Star. "They said we were going to land at 2 o'clock in Washington and I knew we would. We landed early so I knew I'd be able to make it (to Kansas City) on time. Once I received the award, I committed to being here. I've been every year and I'm proud of that fact."

Peyton Manning just gave an awesome speech at the 101 awards in KC. He flew into KC tonite from Germany after spending time with US troops. 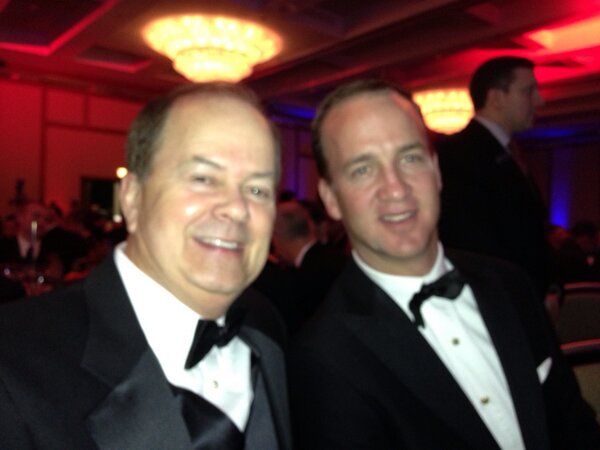 Clark Hunt caught up with Peyton. We're all thinking the same thing: One year too late, Clark. 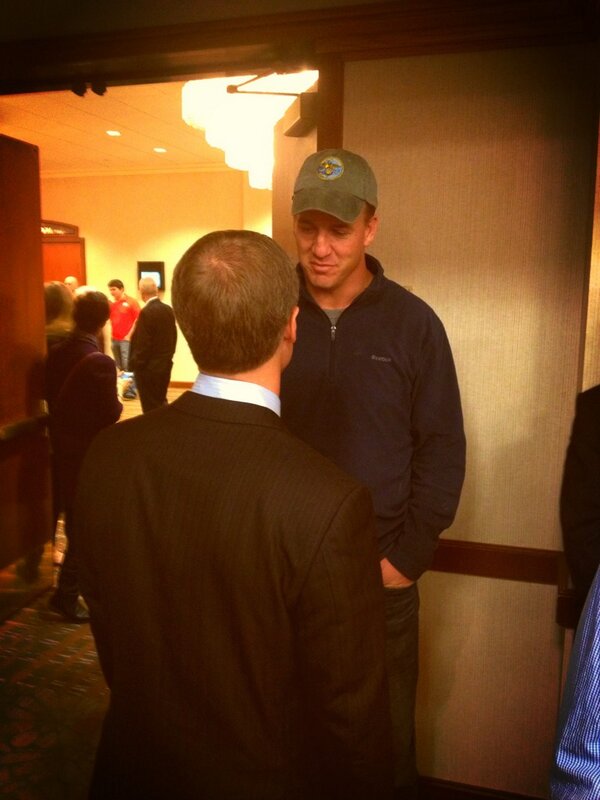 Mayor Sly James apparently forgot the pain of two January losses to Peyton, and took this picture with him. 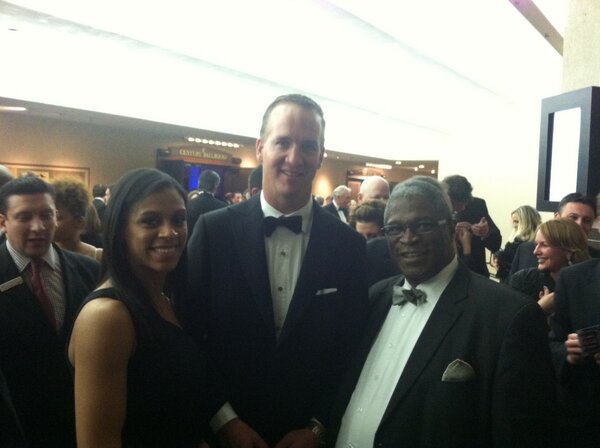 J.J. Watt won the AFC Defensive Player of the Year award for dominating all season long.

The stats: "Watt had an NFL-best 20.5 sacks for 139 yards lost in 2012. He also broke up 16 passes, five of which ended up being intercepted, and forced four fumbles. The Texans finished the year 12-4 and won the AFC South. Watt was selected to the Pro Bowl as a starter for the AFC and was a unanimous first-team All-Pro selection by the Associated Press."

Wade Phillips was on hand to accept the award for Watt. 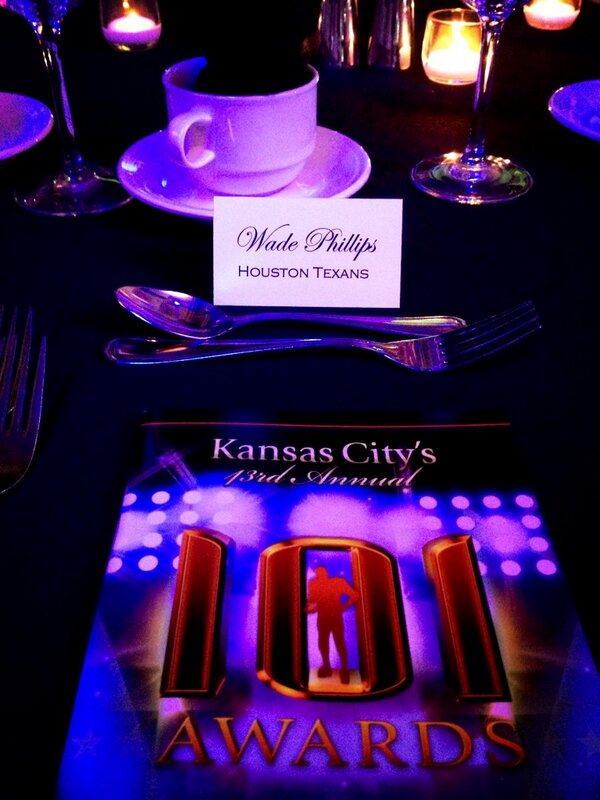 @sonofbum thank you for accepting the NFL 101 award for me. Wish I could make it, but couldn't ask for a better person to accept it instead.

The AFC Coach of the Year went to Colts' Chuck Pagano and Bruce Arians. Good thing there were two winners: Pagano was in New Jersey accepting another coach of the year award while Arians was in KC.

Cool seat mate on flight to KC, AFC coach of the year Bruce Arians on his way to 101 dinner. Remembered my mom from his days with the Chiefs

Next up. Bruce Arians got his NFL coaching career started with @kcchiefs as running backs coach in 1989. #101Awards bit.ly/15WxsdP

@kcchiefs @nflnetwork @richgannon12 great event, had lot of fun with my old coach Bruce Arians honored for the AFC coach of the year. 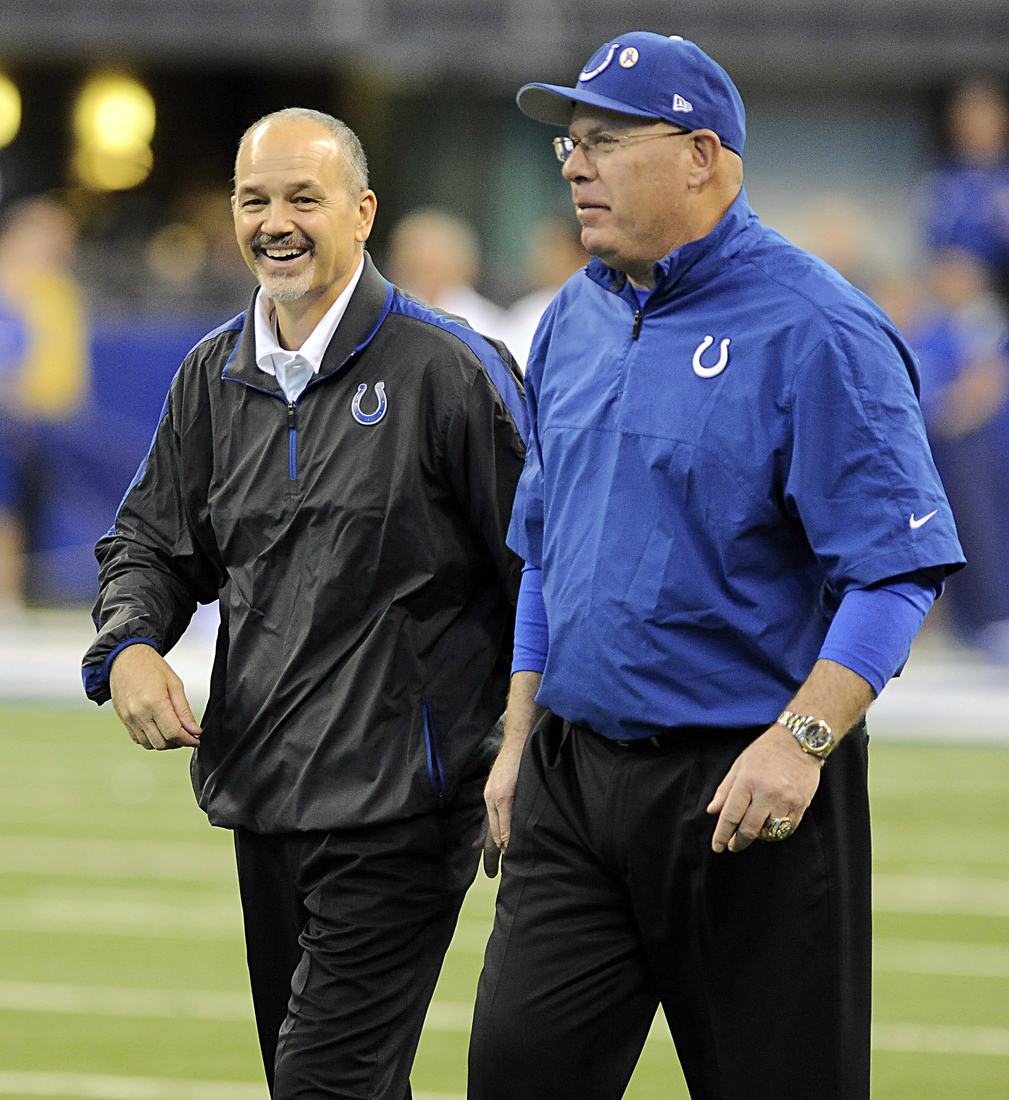 For his contributions to the game, Don Shula was given the Lamar Hunt award. 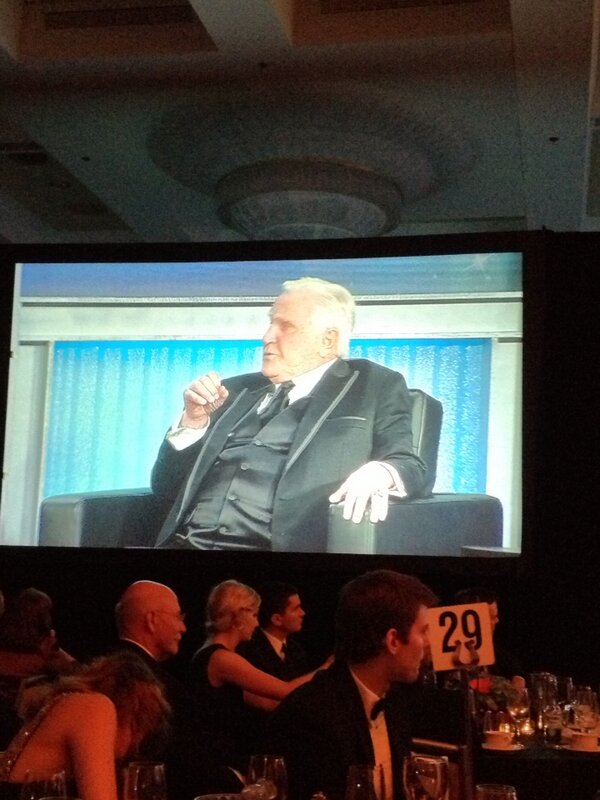 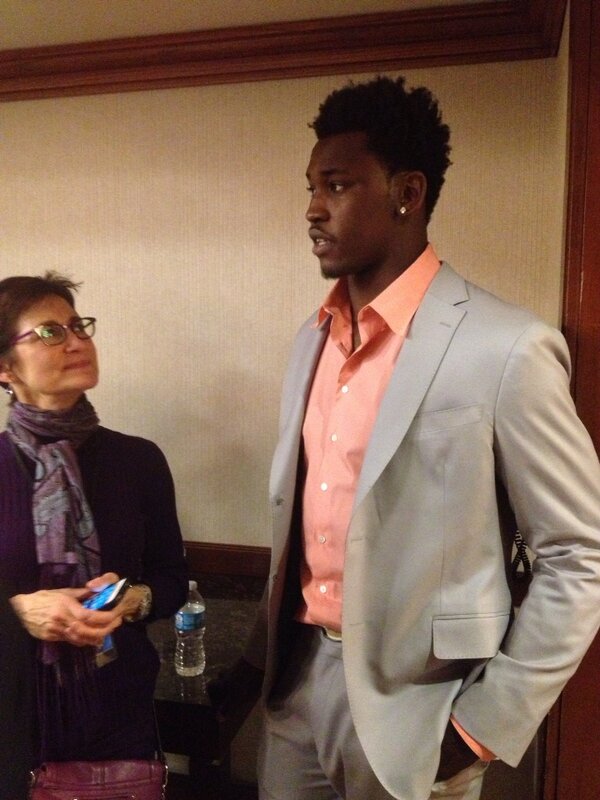 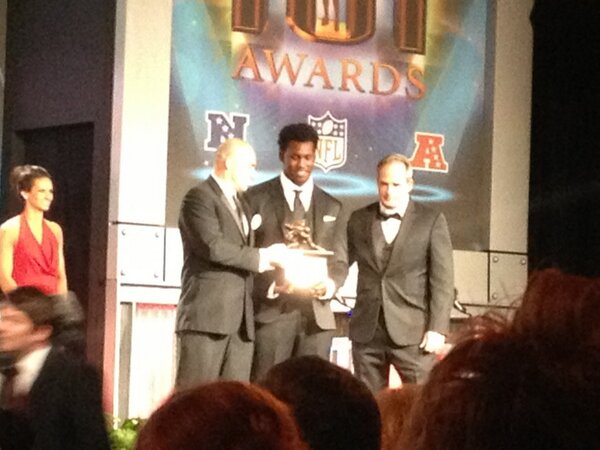 Adrian Peterson won the NFC Offensive Player of the Year award. He couldn't make it so his coach, Leslie Frazier, stepped in. 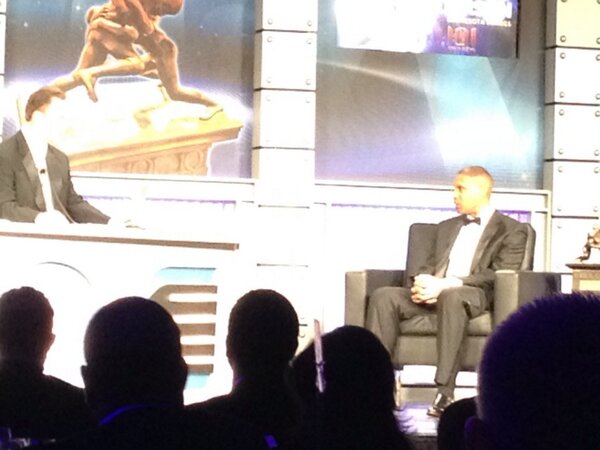 Pete Carroll's run with the Seahawks earned him the NFC Coach of the Year award. 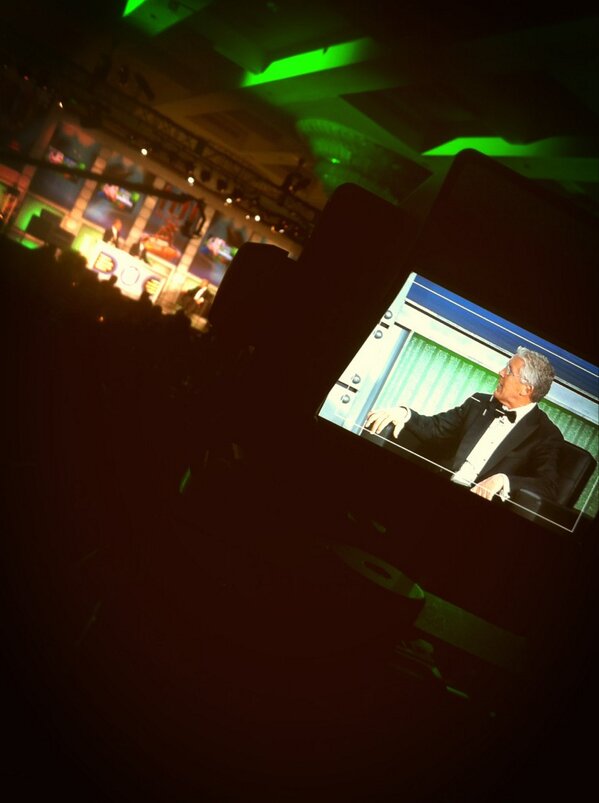 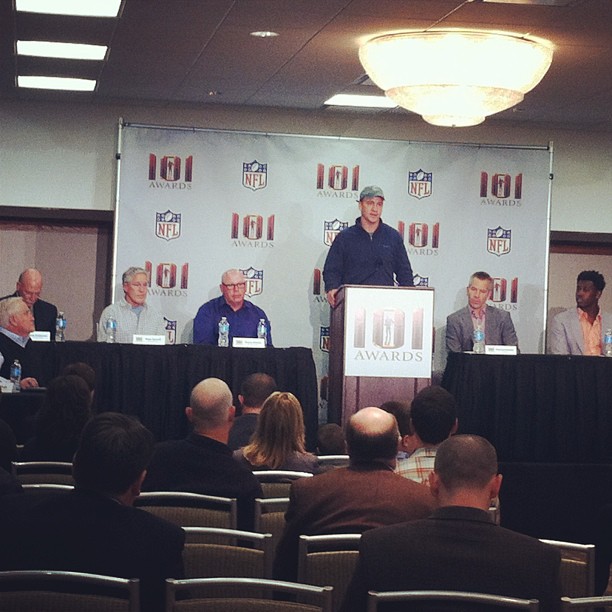