The Kansas City Chiefs search for the No. 1 pick continues. The Chiefs will have West Virginia's Geno Smith in for a visit, as well as Dee Milliner, cornerback for Alabama.

Share All sharing options for: Dee Milliner, like Geno Smith, will visit the Kansas City Chiefs before 2013 NFL Draft

Have I confessed yet that Alabama's Dee Milliner is my favorite player in the 2013 NFL Draft? If you've been reading this blog long enough, you shouldn't be surprised by that. Deion Sanders is one of my favorite players ever. Brandon Flowers is probably my favorite Chief. Playing cornerback very well automatically makes you a badass in my book. (Badass ... how's that for analysis?)

The big news of the day is that West Virginia's Geno Smith is visiting Kansas City, and you can read about that here. But so is Milliner, the Alabama cornerback projected to go in the top 10, according to NFL Network's Ian Rapoport.

The case for Dee 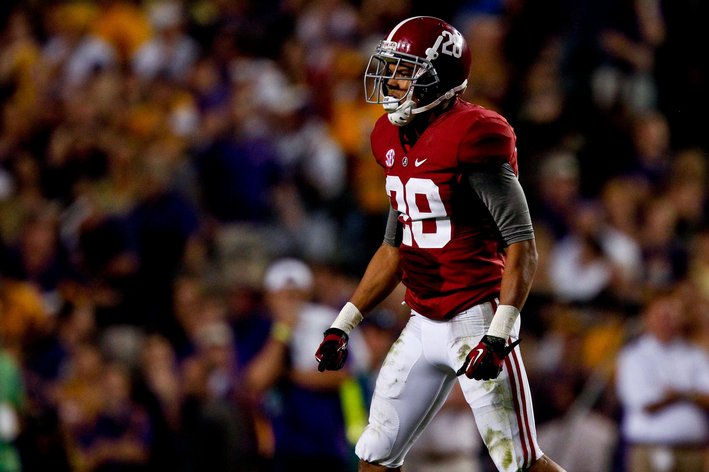 BJ Kissel: "There's no point in consistently bringing pressure if the QB can easily get the ball out quickly to a receiver with a free release and the separation to make a big play. Milliner can get up in a receivers face and alter the timing and route of a play within a short distance, but also the speed to stay with a receiver down the field. Like ALL NFL prospects he's not perfect or without questions and room for development. But Milliner fills a need and would fit well within our defense in my opinion."

If I were making my pick in the SB Nation bloggers mock draft three weeks ago, I would have strongly considered Milliner for the No. 1 overall pick. Heck, I would still put him in my top three candidates for the pick even today. He's very good, plays a premium position and comes from a good football school.

In the last few weeks the Chiefs have addressed the cornerback position via the additions of Sean Smith and Dunta Robinson. Those two will help out in 2013 but because they weren't signed to massive contracts -- in other words, the Chiefs haven't committed more than a year or two to either -- you have to think Milliner is still in play for the top pick. The No. 1 pick is significantly more important than a couple of free agents signed to three-year deals, so Smith and Robinson's signings won't necessarily stop the Chiefs from drafting Milliner. But the fact that they did sign those players means cornerback isn't as urgent of a need as it once was.

KC will meet with Jarvis Jones