Chiefs in the NFL Draft: Matt Elam and the Florida Gators are next on the list

The Kansas City Chiefs search for their 2013 NFL draft picks continues in Florida. The Chiefs contingent landed at the University of Florida where they'll be working players out. Which ones? Read on.

Share All sharing options for: Chiefs in the NFL Draft: Matt Elam and the Florida Gators are next on the list

The new Kansas City Chiefs really are brand new. You would never believe this in the last four years but now, under GM John Dorsey and head coach Andy Reid, the Chiefs are the ones announcing their own draft interests. The Chiefs Twitter account posted this picture this morning:

Where Andy? Tracking the Chiefs in the draft 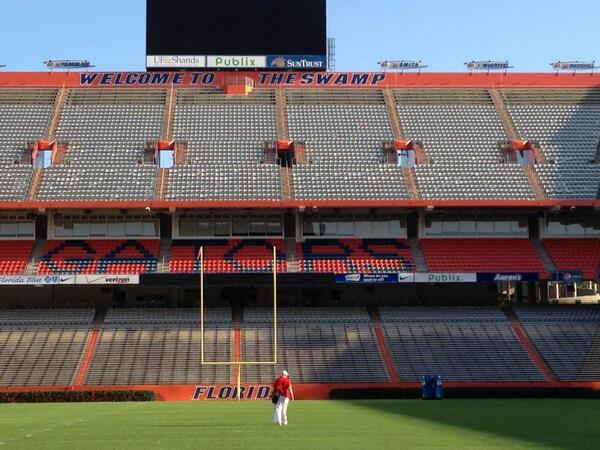 That's Florida. And that appears to be GM John Dorsey. (Maybe.) The Chiefs Twitter account posted another picture of defensive line coach Tommy Brasher working a player out. Can anyone identify this player? 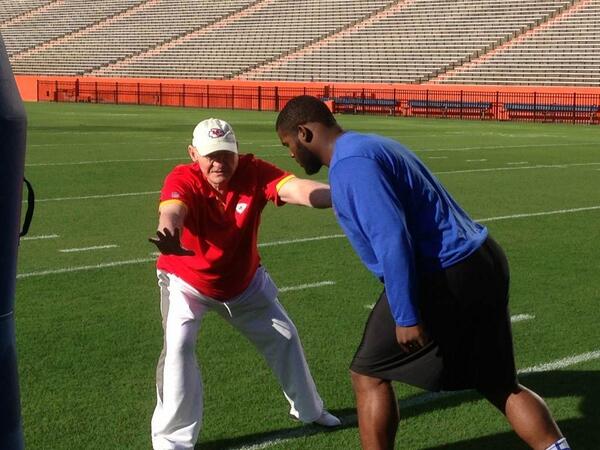 While we await your answer in the comments section, we have a little more information on who the Chiefs are working out in Florida.

Abe Elam, a FA who played for KC last year, accepted the award for him.

Matt Elam is widely viewed as one of the top safeties in the draft, a player who could go in the second round. The Chiefs currently don't have a second round pick so someone like Elam would likely come into play if he fell into the third round or if the Chiefs somehow recouped a second round pick after they lost theirs in the Alex Smith trade (a Branden Albert trade, anyone?).

BJ Kissel of Arrowhead Pride fame wrote "The case for a safety" in the 2013 NFL Draft earlier this year, and highlighted Elam.

Elam is a playmaker, plain and simple. He had 22 tackles for loss over the past two seasons at Florida and finished with 4 interceptions in 2012 which tied him for 4th best in the SEC. I think Elam's closing speed is the best among this group and something that really sticks out about him. When there's a play in front of him and he's around the box there's a good chance he's going to be in on the tackle or disrupting the play. He doesn't show the same willingness to fight through blocks to make a play but he will use his speed and quickness to get around blockers.

The Chiefs have Eric Berry at one safety position, so they're set there. The other spot was held down by a combination of Kendrick Lewis and Elam's brother, Abe. Lewis has some injury question marks, and some think the Chiefs could upgrade from him, but he remains a solid candidate to be the safety opposite Eric Berry.

Chiefs are trying to trade Albert