Kansas City Chiefs receiver (or running back? Who knows) Dexter McCluster is an alum of Ole Miss so he was probably thrilled when it was announced that the Rebels would be playing Wisconsin in Kansas City. McCluster attended the game, and saw his team get the upset.

Share All sharing options for: Chiefs' Dexter McCluster takes in the Ole Miss game at the Sprint Center in Kansas City

Kansas City's Sprint Center is a host for the first two rounds of the NCAA tournament, which means Kansas was playing. And in my house that means Mrs. Primetime, a Kansas alum, going crazy about her damn Jayhawks. We picked up a pair of tickets and went to the game last night, sitting way up top: 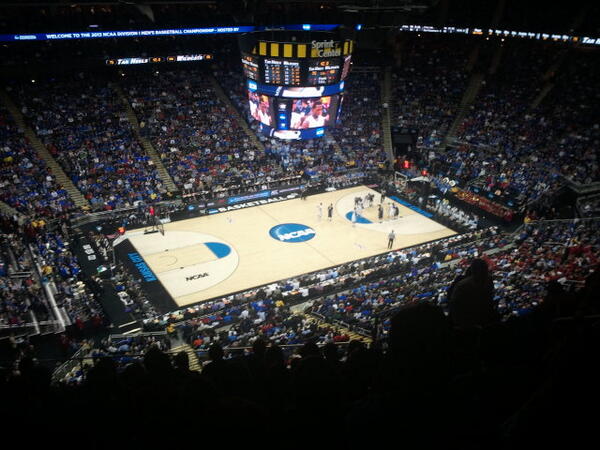 The seats were very high ... but also very free.

Also at Friday's games was Dexter McCluster. His Ole Miss Rebels upset Wisconsin in the first round at Sprint Center and McCluster was on hand to check it out. The video above comes from Kansan.com. There's this article from the Kansas City Star about attending the games, and the Chiefs.

Dexter McCluster rocking an Ole Miss ringer tee with what appears to be glitter on it. His sparkle game is strong.

Also taking in the Madness....

So...Carl Peterson is at the Sprint Center tonight. And yes, he IS wearing a black leather jacket. @arrowheadpride #MarchMadness

This concludes the series of extremely important Dexter McCluster and King Carl updates.