The Kansas City Chiefs had major turnover at the quarterback position this offseason, parting ways with Matt Cassel and Brady Quinn and adding Alex Smith and Chase Daniel. Chiefs head coach Andy Reid spoke to reporters from the owners meetings in Arizona this week and explained why he likes them.

Andy Reid said he had his eye on Alex Smith from the time the Kansas City Chiefs hired him. He said he likes the fact that Smith has won a lot of games over the past couple of seasons and that his quarterback rating "has been off the charts."

But we know all that. And this is Kansas City. We care an unhealthy amount about backup quarterbacks, especially those who were groomed right down the road.

So, what does Andy Reid think about Chase Daniel? 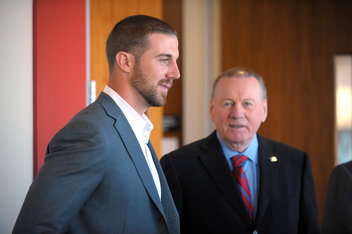 "The fact that he’s won a lot of games, and his QB rating has been off the charts," Andy Reid said of Alex Smith from the owners meetings. "I would tell you that he has the intangibles, the leadership and the work ethic and the smarts that you need to do well. He’s really had a touch of our offense, some of the numbering system is similar to what Jim [Harbaugh] had him doing."

"All you have is preseason film," Reid said from the NFL owners meetings this week (comments via the Chiefs), "so you're looking at one of the more productive quarterbacks inthe preseason. He's a local kid. I had coached at the University of Missouri, so I knew about him when he was coming out. Sean Payton, who I'm friends with, thought the world of him. He got to play behind Drew Brees, so he understands what it takes to be a champion at this level and lead a football team. I welcome that."

Anyone else thinking the next BJ Kissel breakdown is going to have to be Chase Daniel's preseason film?

More from Andy Reid at the NFL owners meetings:

Reid on DMC: 'There is a place for him'

Reid says Chiefs have been called about the No. 1 pick

Chase Daniel to the Chiefs: everything we know