Kansas City Chiefs head coach Andy Reid said at the NFL owners meetings this week that "a couple of teams" have called them about trading for the No. 1 pick in the 2013 NFL Draft.

Just like any NFL Draft without a sure-fire quarterback sitting at the top, the team with the No. 1 pick is interested in trading back. Kansas City Chiefs head coach Andy Reid spoke to reporters at the NFL owners meetings this week and revealed that the Chiefs have talked to other teams about a possible trade for the No. 1 pick in the 2013 NFL Draft.

"We're going to keep all the options open," Reid said, according to Jim Corbett of USA Today. "I said this when we had the second pick (with the Philadelphia Eagles in 1999) and I was sitting at this meeting and (New Orleans Saints coach) Mike Ditka offered to trade me his whole draft. We'll keep it wide open.''

From February: Chiefs interested in trading the top pick

Trading back remains the No. 1 option for the Chiefs. When they made the trade for Alex Smith, they gave up a second round pick. That's a pick the Chiefs would likely be interested in recouping if they could move down in the draft. Opinions vary on what the Chiefs could get for that top pick. Usually a team interested in trading up is doing so for a quarterback but we can't even be certain that Geno Smith, who many rate as the top quarterback in the draft, will be selected in the top 10.

Dorsey: 'There have been discussions...' 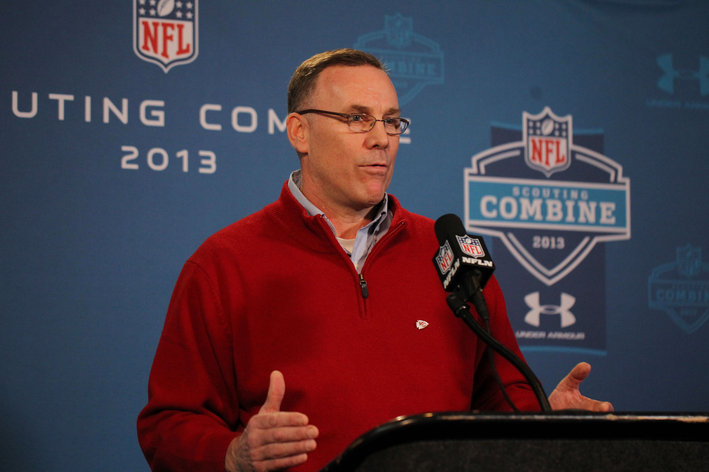 "There have been some discussions with some teams [about trading the No. 1 pick] but usually those thing do not solidify themselves until it gets closer to the actual day itself."

What I do like about how this thing is shaping up is that there is interest from the Jaguars (No. 2) and Eagles (No. 4) in Geno Smith. Or at least we think there's interest (you know, smoke screens and all). If the Chiefs put the top pick up for sale, and there are teams who want Geno Smith, the only way to be completely sure you can select him is by trading with the Chiefs.

The Chiefs are probably about done in free agency, at least with the big signings. This is, for the most part, the team they'll take into the Draft.

If a trade goes down, when could it happen? At any time. But, most likely, not until closer to the draft. Deadlines have a funny way of creating action, especially in the NFL. If the Chiefs have any takers for that pick, I suspect something wouldn't go down until the week of the draft.

Steve Maneri drawing interest from others