The impact of the Kansas City Chiefs 2012 NFL Draft class

The Chiefs 2012 NFL Draft class gave Andy Reid a familiar, solid group of players to work with as Reid builds the team in his image.

Share All sharing options for: The impact of the Kansas City Chiefs 2012 NFL Draft class

For most incoming general managers and team executives, the first year or even two of taking over an NFL franchise is about making over the roster in your image. Veteran players are jettisoned. Former draft choices are released or traded without regard to the investment made. A fresh start for the franchise means a fresh look at the players, and that often means massive turnover for any team.

The Kansas City Chiefs made the move this offseason to clear out the front office and coaching staff. In are John Dorsey and Andy Reid and out are Scott Pioli and Romeo Crennel. Both Reid and Dorsey will be handling personnel moves together, so a look back at draft classes provides some sense of what both men want to bring to the Chiefs. One thing is clear, the NFL Draft will be paramount in its importance to the team's core players in the next five years or more.

That said, the first year is often about settling in for the long haul and a look at Scott Pioli's first class with the team didn't give the Chiefs any real help over the years. Yes, Tyson Jackson is still with the team, and Ryan Succop stuck as the kicker. However, Alex Magee, Donald Washington, Colin Brown, Quinten Lawrence and the rest of the class were forgettable at best.

As Andy Reid comes in, one thing is clear from his previous draft classes: he loves stocking up in the trenches. Jason Brewer at our Eagles blog, Bleeding Green Nation, notes that Reid has invested heavily over the years on the offensive line for the Eagles in both the draft and free agency. In the last three drafts, Reid has selected a player for the trenches, so to speak, as the first pick in each one: from Fletcher Cox last spring to Danny Watkins and Brandon Graham.

In eight of the 10 last draft classes for the Eagles, the very first pick was an offensive or defensive lineman.

In short, Reid loves to make sure his team is well-stocked along the offensive and defensive fronts, and that is likely to continue in Kansas City. The team already released Eric Winston in a surprising move at right tackle. While it's a questionable move that raised some eyebrows, it shows the team has a very specific vision for the line and will execute that plan this offseason. Hindsight will likely show that several new faces were brought in, perhaps even with the first overall selection.

However, Reid also owes the previous regime for at least one thing: helping to stock the lines with at least one draft class as they were coming in. The verdict is still out on Scott Pioli's last draft class for the Chiefs in terms of value and impact, but there are young, athletic and projectable players that Reid and his staff have to work with.

1. Dontari Poe won over scouts and media at the 2012 NFL Combine with his incredible athleticism for a player who weighs in at 346 pounds. Pioli took a chance at No. 11 overall in the draft, and Poe had a mixed bag of a first year with the team. Yet that was predictable for a player who played his college career at Memphis.

The good news for Reid is that Poe should be quite ready in his second year to make a tremendous leap forward in impact. Poe was No. 14 in the NFL in total snaps for a interior lineman and he played in nearly 75 percent of the team's snaps. That's tremendous experience for a young player and shows great stamina on Poe's part. The conditioning and talent are there, and he spent last season learning technique at the top level. That will pay off. 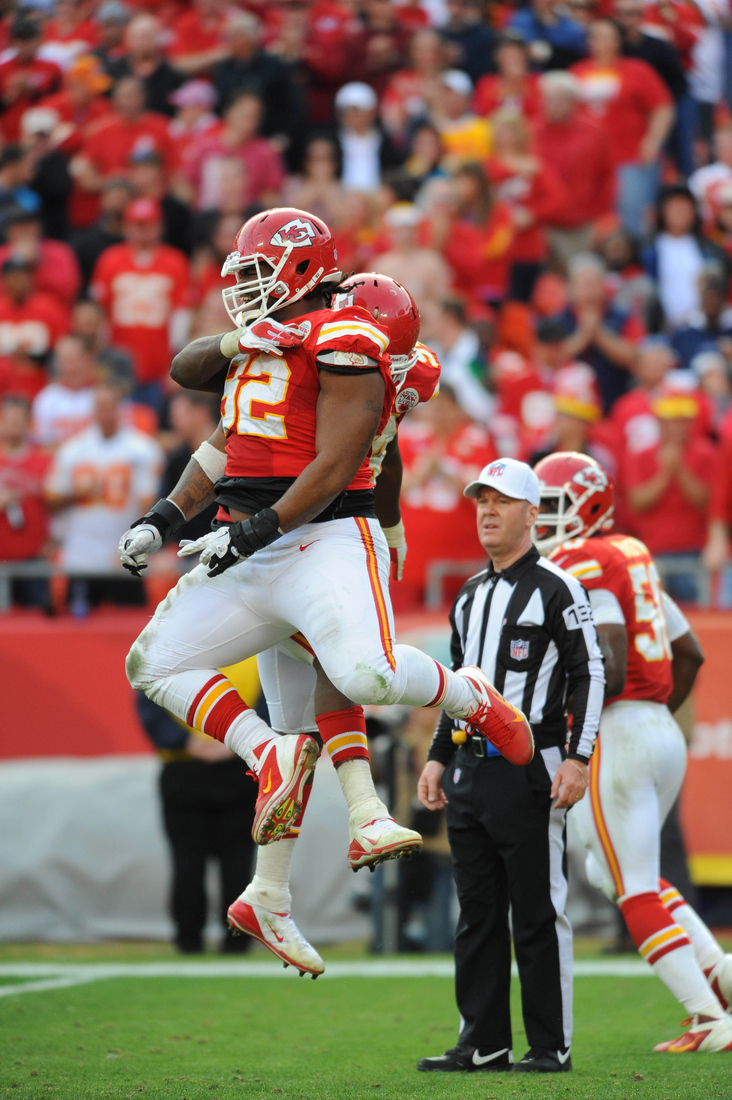 2. Jeff Allen was the team's second round selection, and was taken after a long run on offensive linemen in a row. The Chiefs grabbed Allen as a versatile, experienced lineman at Illinois who could play almost any position along the offensive front. Allen came in at left guard and remained the team's starter there, playing in nearly 90 percent of the team's snaps on offense by season's end.

3. Donald Stephenson was the surprise choice in the third round for the Chiefs. The team seemed set at the position with Brandon Albert and Eric Winston already in place, but Pioli saw something in the former Oklahoma Sooner. It turns out the team needed him more than they realized with Albert's injury issues this season. Stephenson played in over half of the Chiefs snaps in 2012 including several starts at left tackle.

The results from last season were not pretty for anyone with the Chiefs finishing as the worst team in the NFL. However the experience gained as first-year players for Poe, Allen and Stephenson provide Reid with three young players still ascending the learning curve in positions he invests heavily. Whether or not this will free up Reid and Dorsey to invest elsewhere remains to be seen. If anything, Reid has a bit more to work with than what people might expect a two-win team to have in hand. He has the last draft class to thank for that.

Andy Reid: Chiefs have talked about trading No. 1 pick

Steve Maneri drawing interest from others