Now that Matt Cassel is no longer a Kansas City Chief, let's take a look back on his time in the Red and Gold, as well as the reactions some had throughout the years on Arrowhead Pride.

Share All sharing options for: Reliving the Matt Cassel era in Kansas City

Well KC Chiefs fans, the Matt Cassel era in Kansas City is officially over. After four years of No. 7 at the helm of the offense, the Chiefs organization has moved on in favor of a recent trade for Alex Smith. With that in mind, I thought I'd take a look back on his time with the Chiefs, as well as the (sometimes hilarious) reactions of Arrowhead Pride's faithful readers and writers. So, without further ado: MATT CASSEL, THIS IS YOUR (Chiefs) LIFE!!!! 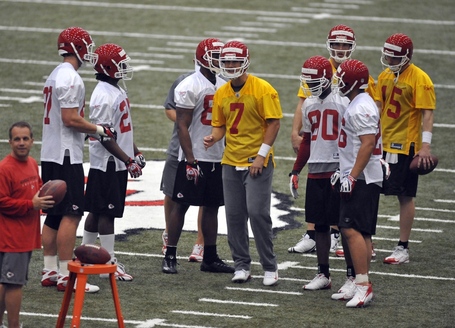 Pioli had done it. He'd landed the big fish in free agency…and on the very first day of it, too! Cassel had just come off an 11-5 season with the New England Patriots as a fill-in for injured quarterback Tom Brady. He threw for 3,693 yards, a 63.4 percent completion percentage, 21 TDs, and 11 INTs. Multiple teams were interested in Cassel’s services, including the Detroit Lions, who had the No. 1 overall pick coming up. Pioli wheeled and dealed and landed Cassel AND Mike Vrabel for the No. 34 overall pick. The Chiefs, coming off a season of turmoil and with Tyler "Bones" Thigpen leading the offense, had their franchise quarterback. Needless to say, Arrowhead Pride readers were elated by the trade.

"How good of a deal is this for the Chiefs? NBC pointed out two other quarterbacks who were traded for a 2nd round pick: Daunte Culpepper (with a shot knee) and A.J. Feeley. Nice job, Mr. Pioli." – Joel Thorman

"Greatest Deal EVER if that is true!!!!! Pioli is the man!" – KCCheeze

"Like the move...I wanted Mack or Unger but you’re not going to get a better player than Cassel at #34." – HIV 2 Elway 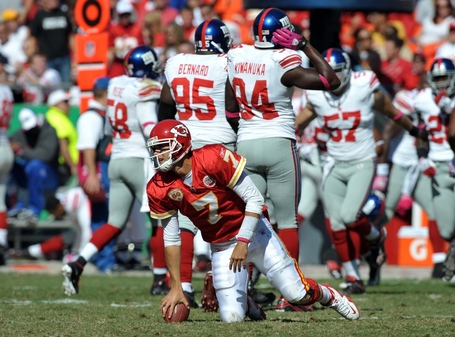 After starting the year with a knock (Hi, Brodie Croyle!), Cassel stepped in as the starter in the second week against Oakland. It was rough going for the Chiefs this season. After getting soundly beat several weeks in a row, Cassel led his team to overtime against the Dallas Cowboys, where they were beaten by a long TD pass to send them to 0-5. Mike Vrabel even had a sack! Still, opinions were mixed about Matt after that game around the site:

"Cassel's downfield accuracy has yet to impress me." - Chris Thorman

"I love Matt Cassel. Dude took a beating like a red-headed stepchild today and had no quit in him." - Rev. Slappy

"One thing is for sure: That trade we worked to get Matt Cassel and Mike Vrabel is paying off big time." - 808NaNz808

"I don’t think this is all on the O-Line, its playcalling and Cassel holding on the ball too long. We know the Chiefs can’t hold blocks very long, how come Haley doesn’t? Where are the quick slants/screens needed to mask a weak line? Also, Cassel played alright but I still think he has to make quicker decisions, some of those hits he took was on himself." - craigincalgary

The Chiefs got their first win with a 14-point outing the next week...all from field goals and a Tamba Hali safety. They struggled through the rest of the season, including the suspension of starting running back Larry Johnson, and the mood was souring on the new organization. Even with a bad season, the Chiefs gained some optimism with a 259 yard performance by Jamaal Charles in the last game of the season. The potential for Charles, Cassel, and Bowe to lead the offense the next season kept some hope in the team. 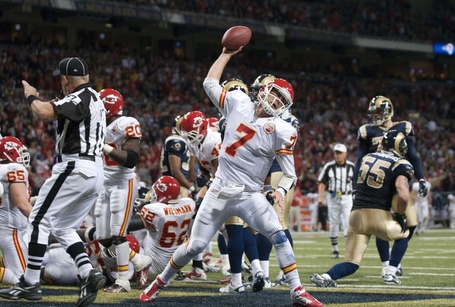 Winning is nice, right? The Chiefs started off the season in fine fashion with a fantastic victory on Monday Night Football against the Chargers and continued to compete throughout the season. Cassel took care of the ball pretty well all season and earned himself a Pro Bowl alternate spot, winning the division with a 10-6 record and going to the playoffs. Even still, the Chiefs lost in the first round of the playoffs, and there were questions about whether Cassel had what it takes to take Kansas City to the promised land, and it showed up in the comments here on the site, dividing the fanbase:

"Facts speak for themselves, 26th in the league. Cant handle the heat." - Arrowdread

"Is the TD/INT ratio on Cassel or not? Either stats fall on the QB or they don't...Can't make the bad stats his fault and give the credit for good stats to someone else. He's to blame and he should get credit for both, respectively." - MNchiefsfan

"Cassel is part of the right 53. In Pioli we trust." - Matt Verderame

"We expect Cassel to take us to and win Championships, and if he doesn't, he's a failure. How long do we give him?" - RememberDelaney37

Needless to say, there wasn't an agreement on what Matt Cassel was to this team, and it created a lot of discussion. Cassel ended the 2010 season with 3,116 yards passing, 27 TDs, 7 INTs, and a 58.2 percent completion percentage. 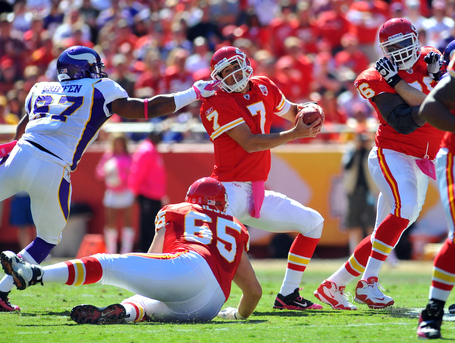 The Chiefs were going into the season with a team full of Pro Bowlers, the most exciting running back in the league, two more upgrades at wide receiver (Steve Breaston and Jonathan Baldwin), and a real opportunity to do some damage in a weaker division. Even amongst the Cassel detractors, there was hope for the offense to progress...until the injuries started. Eric Berry and Jamaal Charles went down in Weeks 1 and 2, and the Chiefs got obliterated in both of those contests. In Week 3, Cassel threw the Eric Weddle screen-pass interception with 55 seconds left with the Chiefs driving in field goal range, sending the Chiefs to 0-3. Cassel played nine games before being knocked out due to injury. The Chiefs were middling at a 4-5 record. Chiefs coach Todd Haley was fired soon afterwards, and both Tyler Palko and Kyle Orton started games at quarterback after Cassel's injury. Understandbly, the mood changed with Cassel around the Chiefs fanbase, many calling for a quarterback upgrade, but with some defenders:

"You give Matt Cassel a solid run game, a good offensive line, room in the pocket...and only one read to make. I hope he used his time off to practice his mind." - Brsrkr

"It's very clear to me, when Cassel is confident in the pocket, he makes reads and makes plays..." - stagdsp

"At his best, he's average, but he doesn't always play at his best. I'd probably take any other starter over him." - ChiefWarPaint 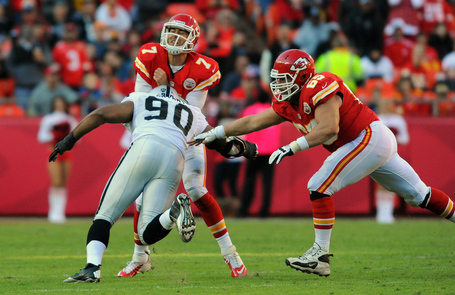 And the Chiefs came full circle. Before the season, there was still some hope, with both Jamaal Charles and Eric Berry coming back from injury. With Romeo Crennel to coach, the defense was expected to continue its upward climb, and if Cassel could return to 2010 form, the team could make a run again. Alas, 4 years after the team tied the worst record in franchise history and Clark Hunt cleaned house, the Chiefs ended up with ANOTHER 2-14 record. Cassel did not play well, and the fans let the team know it. Banners, blackouts, and an overblown incident with fans cheering for Brady Quinn when Cassel went out hurt. Cassel missed a game due to that injury, came back, and started 3 more games before losing his starting job for good. He finished the season with 1,716 passing yards, 6 TDs, 12 INTs, and 58.1 percent completion percentage. The writing was on the wall, and Matt wasn't sticking around for long.

And that brings us to the present. If you look around the site, you can see that pretty much everyone around here is in agreement with this organization parting ways with Matt. He's had a rough go during his time in KC, and by all accounts is a classy guy who's done a lot for the community. He took a ton of hits and was under nearly constant pressure behind some of the Chiefs early offensive lines. He had a new offensive coordinator all four years, and outside of Charlie Weis, most of them made poor decisions in playcalling. Still, Matt didn't help his case, locking in on receivers, not taking care of the ball, and struggling with deeper passes. He was our quarterback, though. He may be nothing more than a footnote in Chiefs history, but we won't soon forget the 4 years he spent with us in Kansas City.