I'm working on a more in-depth free agency primer but to keep the conversation going here's a snapshot of the big ticket items for the Kansas City Chiefs in free agency -- what John Dorsey and Andy Reid have done so far, who will become free agents on Tuesday, the Chiefs current needs and what the rumor mill is saying.

John Dorsey and Andy Reid have signed 10 players in over six weeks on the job: 7 offense, 3 defense.

Signing Bowe was the best move of them all. 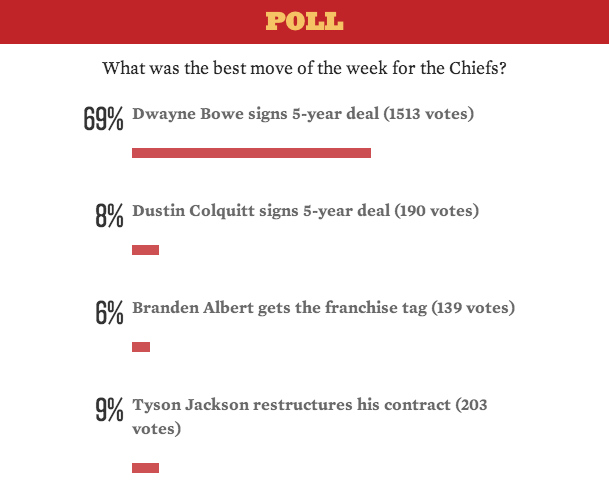 The new Chiefs have released three players so far: two $20+ million contracts and a $9 million deal.

The Chiefs have 15 unrestricted free agents. These guys will be able to sign with any team on Tuesday at 3:00 p.m. (Arrowhead Time).

The Chiefs have three major positions to address.

The details of Robinson's deal have yet to emerge, but multiple sources said that the Chiefs were hoping to get Robinson done and still sign another cornerback such as Sean Smith so that they could have a trio of Robinson, Smith and Brandon Flowers. -Jason Cole, Yahoo! Sports

Add Glenn Dorsey to growing list of players likely to end up staying with their current teams. KC really trying to retain its own talent ...

How to track free agency news