'Chiefs should draft a LT and replace Branden Albert': A 5-year history

Over the years many Chiefs fans have been eager to replace Branden Albert at left tackle for one reason or another, whether that's moving him to guard or releasing him outright. In fact, I went back and found an example of me (guilty) or someone else in the media talking about moving on from Albert at left tackle in each of the last five years. Albert was drafted in 2008. By 2009, the replacement talk had started. See below for the evidence.

Share All sharing options for: 'Chiefs should draft a LT and replace Branden Albert': A 5-year history

You tweeted this two yrs ago @arrowheadpride: 3rd straight year of "Let's draft a left tackle and replace B. Albert" sbn.to/gRxh49

We can update this: 5th straight year. 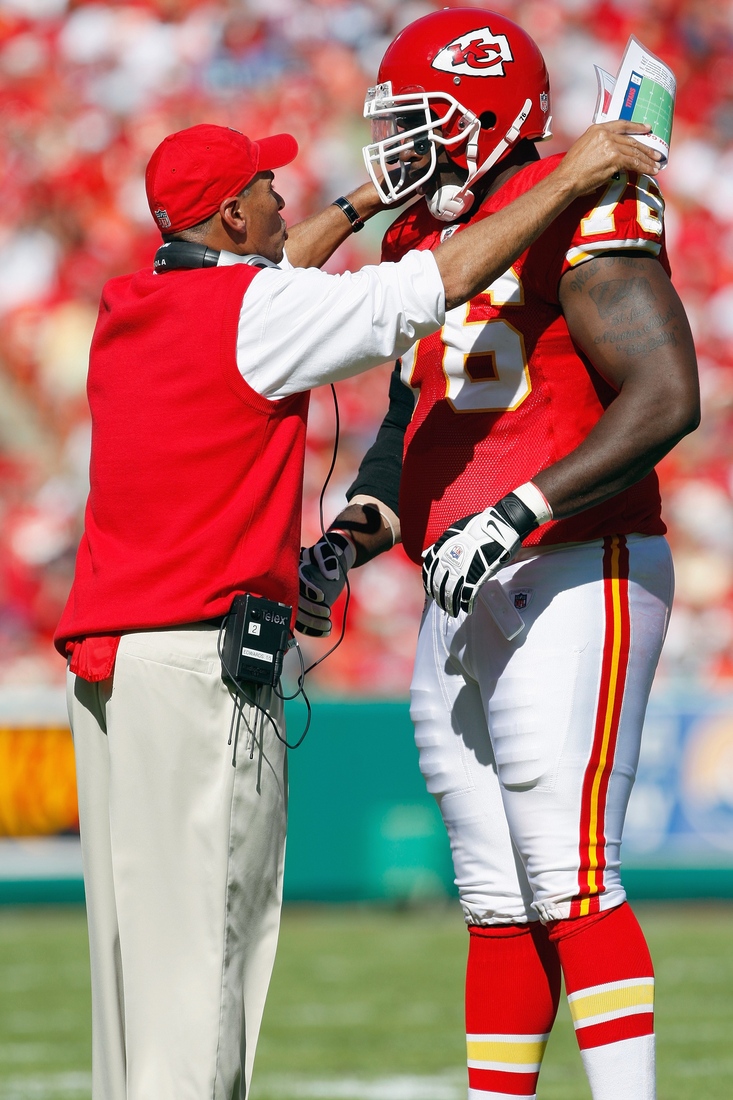 April 21, 2009: More experts like the Chiefs drafting a tackle

"It's time to get back to that style of play. Jason Smith should be the favorite and he can be a dominant left tackle," former Tampa Bay Buccaneers coach Jon Gruden told me in a conference call with the NFL Network today.

I've been advocating drafting left tackle for the Kansas City Chiefs for a little while now. Moving Branden Albert to right tackle, selecting Smith with the third overall pick and establishing book end tackles will go a long way to improving the Chiefs' longevity on offense.

Mayock: I think if Kansas City got the left tackle they wanted, that would really help their entire offensive line. They could kick Branden Albert over to guard or right tackle. Kick Brian Water into center. I think they are a better team with a new left tackle, offensively.

I'm not quite ready to give my final prediction on the Kansas City Chiefs first round pick in the 2011 NFL draft but I will say that I think I'm starting to lean towards an offensive tackle.

That position in the first round is generally a little safer than others and the game in San Diego last year should have shown the Chiefs the importance of keeping QB Matt Cassel healthy and on the field.

There are likely going to be a few options at offensive tackle when the 21st pick comes and I'm not sure the Chiefs can go wrong on any of them.

Coincidentally, the Chiefs yesterday hosted for a visit a player who could potentially take Albert's spot at left tackle (not guard) one day.According to Aaron Wilson of Scout.com, the Chiefs visited with Iowa State offensive lineman Kelechi Osemele.

I've brought up the idea of drafting a left tackle instead of extending Albert, who is entering the final year of his contract. I think the Chiefs need to think long and hard about that possibility, whether it's with the 11th or 44th pick.

Just this week: Chiefs will have trouble trading No. 1 pick

If the Chiefs are considering a left tackle with the No. 1 pick then it might make sense to move out. Although Luke Joeckel is there at No. 1, there are several top free agent tackles in the 2013 NFL Draft. If the Chiefs can move back a few picks, and still pick up a franchise left tackle, then they should consider it. It's just going to be hard to find a trade partner.