Alex Smith trade: Love it or hate it, Chiefs must make it work

The Chiefs trade for Alex Smith looks like a disaster on its face, but time will tell the true story.

Share All sharing options for: Alex Smith trade: Love it or hate it, Chiefs must make it work

When I saw the news and heard the price the Kansas City Chiefs paid to trade for San Francisco 49ers quarterback Alex Smith, I began yelling.

Nobody was home, so I called my Dad and starting yelling into the phone at him, in complete disbelief at how much of a laughingstock the Chiefs are as a franchise. New coach in Andy Reid, new general manager in John Dorsey, and nothing changes.

More: What does the trade mean for the No. 1 pick? For Cassel? Bowe?

Then, in the middle of my catatonic rant, it hit me. We don't really know if this was a good trade.

It hit me. We just don't know yet.

Early on in his career after being the No. 1 overall pick by San Francisco out of the University of Utah, Smith was a disaster. He often looked timid and unsure, nervous to make a big mistake. That description reminded me of Matt Cassel. I never want to watch another Matt Cassel skill set in my life.

After a new offensive coordinator every year for the first five seasons, Smith looked impossible to save, another bust taken with the top selection a la Tim Couch. Then Jim Harbaugh showed up, taught Smith things like scanning the field, standing tall in the pocket, and making the easy play.

Smith succeeded under Harbaugh with a terrific offensive line and solid running game around him, not to mention a great tight end in Vernon Davis.

In the time he played under Harbaugh, Smith played 26 games and had a 19-2-1 regular season record. Last year before being sat down following a concussion, the Utah product had a 70.2 completion percentage, tops in the NFL, while throwing for 7.97 yards per attempt, good for fourth in the league had he qualified.

Make no mistake, if Smith plays the way he did the last two seasons, this trade is a downright steal for Kansas City.

Smith was magnificent in his first playoff game, beating the New Orleans Saints in a 36-32 thriller.

Yes, it was Smith who won that game, driving the 49ers not once but twice down the field. He even ran for a 28-yard touchdown on fourth down late in the fourth quarter to give San Francisco the lead before driving them to the ultimate game-winning touchdown with nine seconds remaining, a bullet to Davis in the front of the end zone.

Make no mistake, if Smith plays the way he did the last two seasons, this trade is a downright steal for KC.

Smith stats for that game: 24-of-42 for 299 yards and three touchdowns while being sacked four times.

Then in the conference championship game against the New York Giants, Smith was mediocre, completing only 12-of-26 for 196 yards and a pair of touchdowns.

So which Smith are the Chiefs getting? Time can only tell. 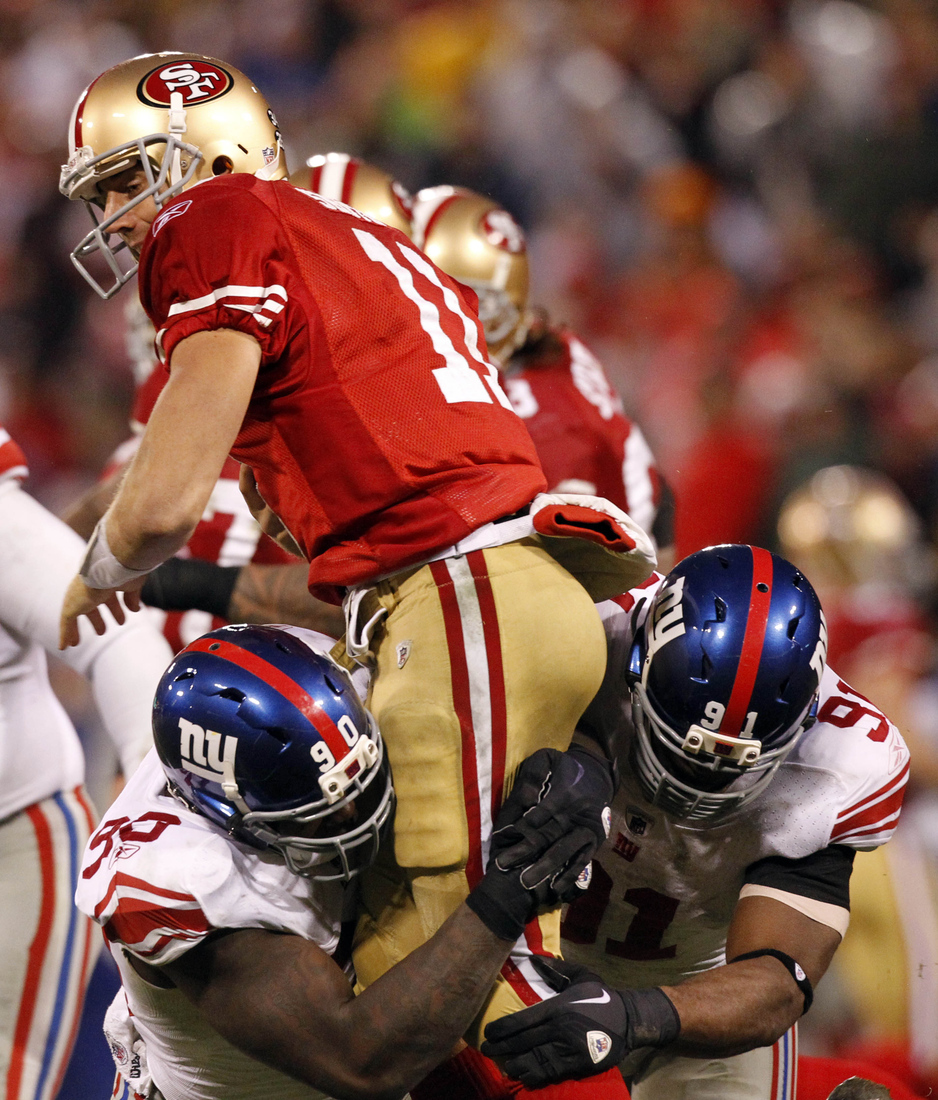 If Reid can continue to coach Smith and get the man who played the last year and a half, the man who threw 30 touchdowns and 10 interceptions, it's a great deal for Kansas City. Winning quarterbacks don't often see the market, and the Chiefs potentially got their hands on one.

I'm all about the draft, anybody who reads my pieces every week knows that. I'm also a realist, and believe that Dorsey didn't see any quarterback in this draft he feels can start Day One. Maybe he's wrong, and if he is, this trade is once again a nightmare. If he's right, Dorsey made the right move.

Smith isn't a franchise quarterback, but he could be a bridge to someone who is. If Kansas City drafted a bust at quarterback this year, it would be sunk for the next three or four seasons. Now? The Chiefs may be a playoff team right from jump street if Smith can continue his success.

I don't blame you if you love or hate the trade. It's a polarizing move by a new general manager who has no track record, but a rush to judgment would be an error.

Smith has much to prove in Kansas City, now let's see if he can do it.