All your Alex Smith and Matt Cassel comparisons in one place

The Kansas City Chiefs did it. They made a trade with the San Francisco 49ers for Alex Smith, one that will reportedly cost them a second round pick in the 2013 NFL Draft and a conditional third round pick in 2014. Our Alex Smith trade approval poll is split fairly evenly right now but plenty of people had strong opinions on the trade, and many of those strong opinions involved comparing Matt Cassel and Alex Smith. Whether it was those defending the trade for Smith or those attacking it, the comparisons were .... entertaining. Check it out below.

Share All sharing options for: All your Alex Smith and Matt Cassel comparisons in one place

Are we sure that Alex Smith is a significant upgrade from Matt Cassel?

Good Christ. Cassel and Smith have identical Total QBR scores over the past five years. es.pn/WjwqXX

ESPN: Smith's unofficial trade from San Francisco to Kansas City invited comparisons between Smith and recent Chiefs starting quarterback Matt Cassel. Smith was much better than Cassel during the 2012 season. He has much better traditional passing stats over the past two seasons. But as the chart shows, Cassel and Smith have identical Total QBR scores over the past five years. They were at 46.6. All starting quarterbacks were at 53.0 over that period. Cassel was slightly ahead of Smith, 46.4 to 45.8, when only starts were considered. 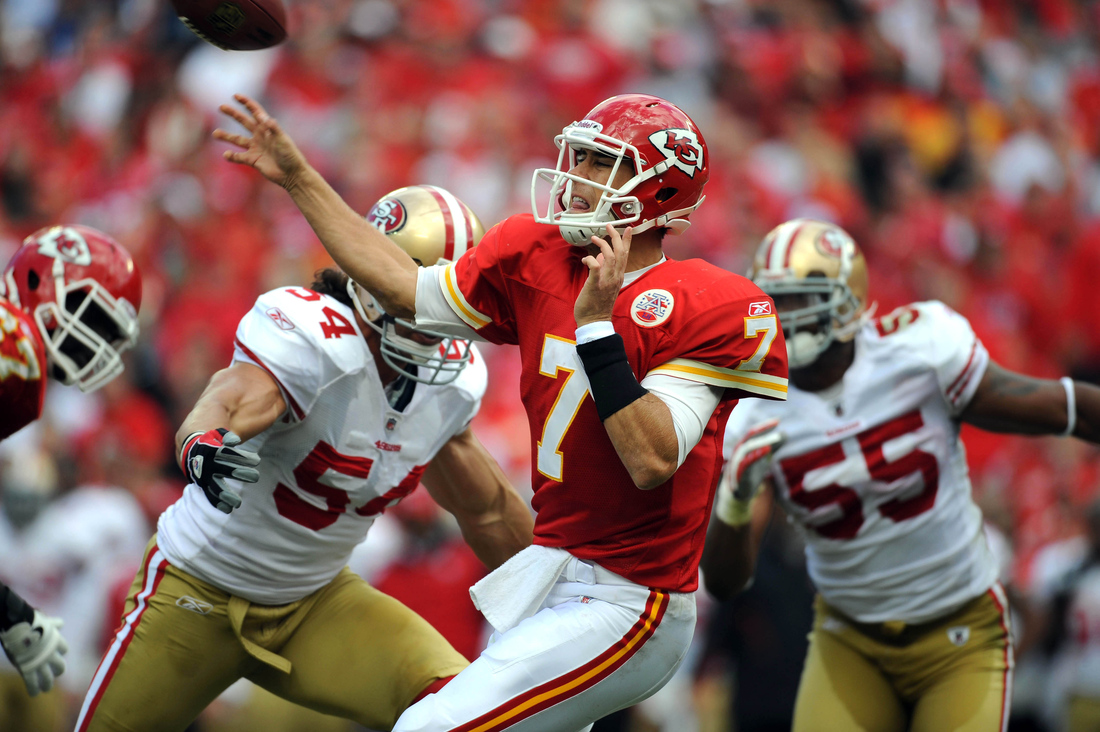 Y'all realize that Cassel's 2008 and 2010 seasons are better than anything Alex Smith has ever put out, right?

Remember a couple days ago when I was talking about how Cassel=Alex Smith. Welp. h/t @fbgchase pro-football-reference.com/play-index/psl…

Alex Smith is not Matt Cassel. You clearly aren't watching tape if you say that.

Biggest difference between Alex Smith & Matt Cassel is that Smith doesn't fold like an accordion when pressured.

If you say Alex Smith is Matt Cassel because of career stats, I'd assume you think Geno Smith & Colt McCoy are similar too. #MoreThanStats 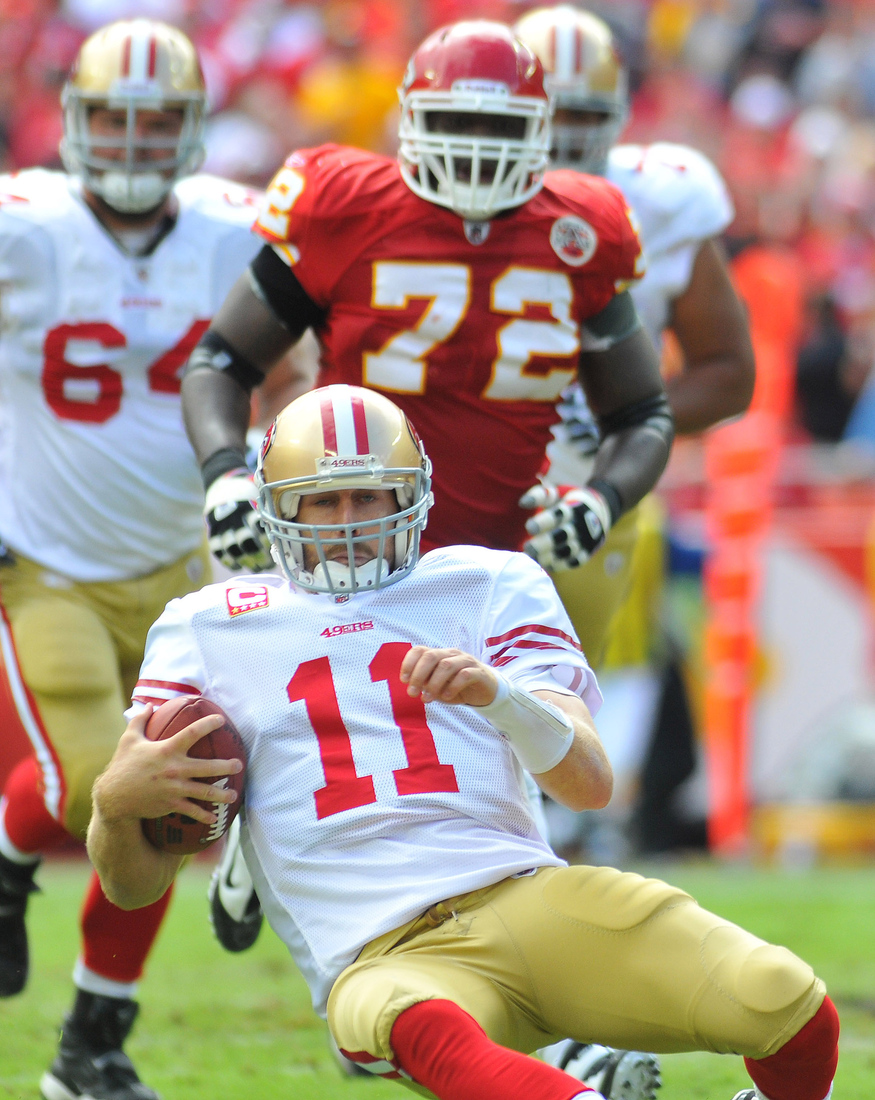 @chiefsbeef I'd rather have Geno Smith and Matt Hasselbeck than trade draft picks for Cassel 2.0

I shouldn't be as excited for a potential trade of Alex Smith as I am. Thanks for lowering the bar Matt Cassel.

That's what I'm saying. RT @joegoodberry: Matt Cassel could be Alex Smith if he was on the 49ers.

Still haven't found anything other than "wins" that indicates Alex Smith is better than Matt Cassel. #Chiefs 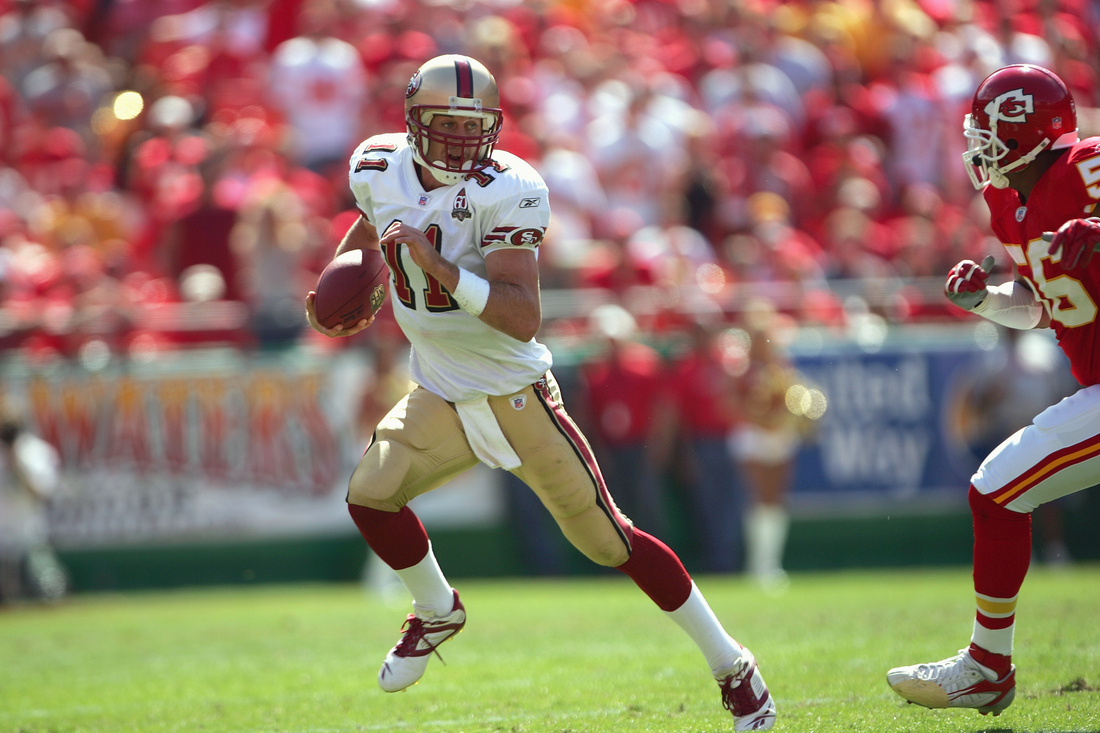 The Alex Smith trade reminds me of the Matt Cassel trade the #Chiefs made a few years ago. Both the Pats and #49ers had an extra QB to deal

Unfortunately for Alex Smith, it seems like Kansas City is where quarterbacks go to begin there decline. Just ask Matt Cassel #toobad

"Alex Smith will be a tone-setter for the new Chiefs"

The case AGAINST Alex Smith

The case FOR Alex Smith

Everything we know about the Alex Smith trade

Odds on everything Alex Smith