The case against Alex Smith: This is why the Chiefs should avoid the trade

If John Dorsey and Andy Reid are putting their eggs in Alex Smith's basket, they've burned much of my goodwill on the Kansas City Chiefs. Consider this a response to BJ Kissel's "Case for Alex Smith".

Share All sharing options for: The case against Alex Smith: This is why the Chiefs should avoid the trade

Let's start with this: I hope I'm wrong.

Actually, let's back up a step further than that: I hope the rumors are false. (And they very well might be. Remember when Andy Reid was a shoo-in to coach the Cardinals? Yeah, me too). I hope that the "Alex Smith to the Chiefs" rumors are nothing more than bored speculation of those who have little else to do right now.

BJ Kissel: The case for Alex Smith What is the Alex Smith trade market?

However, IF the rumors are true and Alex Smith ends up going to be traded to the Chiefs, I just want to say I hope I'm dead wrong about the guy. I hope he comes in and lights it up like he's Joe Cool 2.0. I hope he shows up and exponentially improves our QB play, providing an elite game manager (not that I think that term makes sense, but we'll get to that later) who helps the Chiefs turn into the 2011 49ers. I hope I have to eat so much crow about my Alex Smith hate that I end up in a crow-induced meat coma.

All that said... I HATE this move, if it happens.

BJ Kissel wrote a great piece regarding the potential positives of having Alex Smith play under center for the Chiefsnext year. It was well written, looked great, and I'll be darned if for about 2.8 seconds I didn't start thinking, "Hey, maybe it WOULDN'T be such a bad idea after all..." (That's how you can tell Kissel missed his true calling as a litigator.)

So I'm saying it in public, for all the millions (or so) of those who frequent this great site...

Andy Reid and John Dorsey, this is strike one

With this one move (again, we're assuming it's true for the sake of this column) you have burned away some of my good will. I will no longer say things like, "Well if Reid likes the guy, that's good enough for me." Instead, you'll be down to two strikes in the ever-important count of this fan's patience (I know you care oh-so-much).

For those who are still mesmerized by BJ's case for Alex Smith (and hey, it was a great piece), allow me to retort... Let's do it in "Arguing with..." format, shall we?

Argument for Alex Smith No. 1: "He's an elite game manager who avoids bad plays and is very accurate" 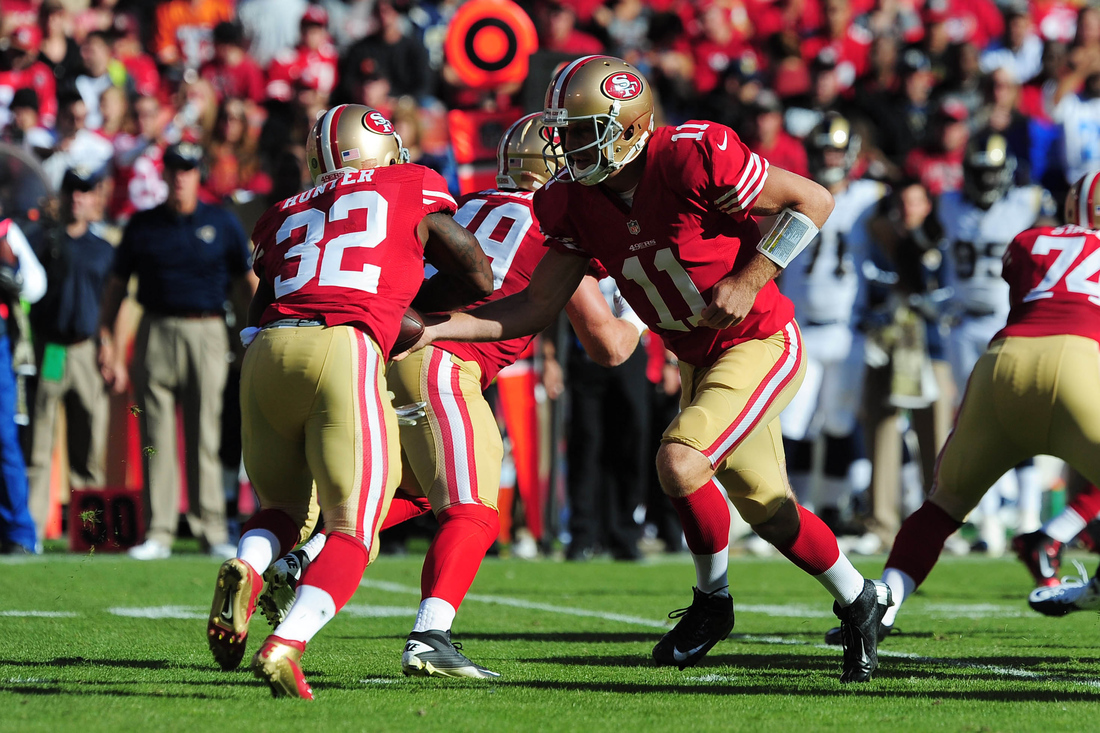 Let's get this out of the way: for the last two years, that's been pretty much true. Alex Smith has been a very solid game managing QB since 2011. Good stuff.

Of course, that argument completely and utterly ignores the gigantic level of suck that was Alex Smith's career prior to the last two years. We'll deal with the Harbaugh era later, but for now let's bask in mediocrity.

Those are the grand totals for Alex Smith. You know who else has career stats like that? You know, don't you? You can already hear the name, even before I write it. The name the vast majority of Chiefs fans have come to despise so dearly.

Equivalent completion percentage, a HIGHER YPA, slightly more TDs per game, fewer INTs and fumbles per game. A very, very strong argument can be made that Cassel's career averages are BETTER than Alex Smith's.

Think about that. And remember, this INCLUDES those last two years for Smith. That's how pathetic he was his first 5 years in the league. It took two years of solid stats to drag his numbers up "high enough" (running pretty fast and loose with the word "high" at this point) to compete with the guy we can't wait to get rid of. I mean... really? We're REALLY trying to say this is the guy we want?

Argument No. 2- "Just because the Chiefs trade for Smith doesn't mean they can't still draft a QB No 1! Smith's a great backup and/or stopgap!" 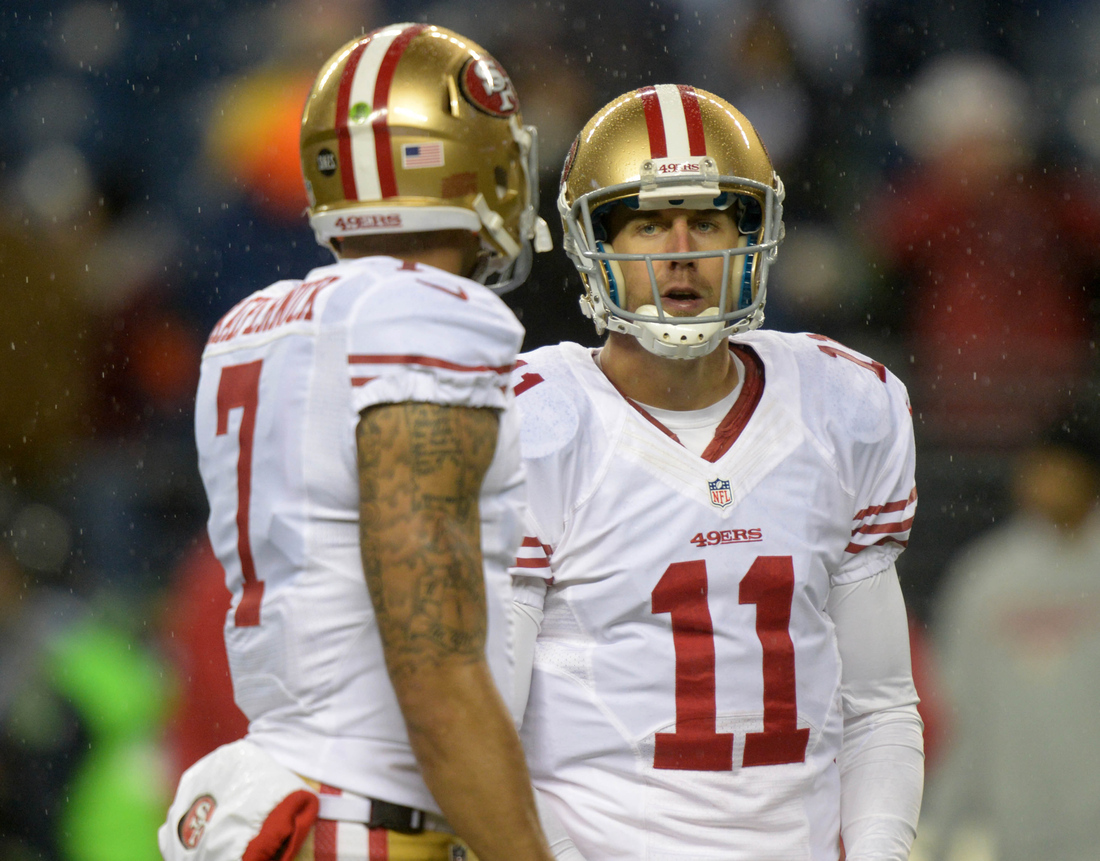 1) The fact that the Chiefs would be TRADING for a backup/stopgap. Trading. As in, giving up assets for a guy who ideally WON'T EVEN PLAY.

2) The fact that Alex Smith's current contract (which the Chiefs would inherit if they trade for him) has him earning $8.5 million in both 2013 and 2014.

You combine those two things and the idea that the Chiefs would be trading for Smith as some kind of "stopgap" or backup makes absolutely no sense. Why on earth would you give away draft picks for a guy who you don't want on the field? Can the Chiefs seriously not find a veteran backup in free agency? If the ideal is that the guy never sees the field and is there to "mentor" a rookie QB while holding a clipboard... why can't the Chiefs do what, yanno, every other team in the league does and SIGN a guy to do that? Matt Moore and Jason Campbell have had some solid moments as well... is Smith really THAT MUCH BETTER than them that we should trade assets AND pay him twice as much?

And as far as the "stopgap" argument goes... did we suddenly morph back into 2000, when rookie QBs were supposed to "sit and learn?" Sorry, no way. The pro game has changed and is much more friendly to rookie QBs than it once was. Early picks are learning on the job. Some are failing, but many are succeeding. And guess what, it was that way long before picks started playing right away. Some draft picks will fail. But whatever QB they deem most likely to be a franchise QB should be a guy who can learn on the job.

And when you throw in that $8.5 million, the whole idea of Smith being a "stopgap" or a backup falls completely apart. Are we really going to spend $8.5 million (almost the entirety of what Albert should cost) on a freaking contingency plan? Sure, we've got some cap space. Of course, it would sure be nice to be able to keep Bowe and Albert AND add a free agent or two. Sign on Alex Smith for $8.5 million and that option player vanishes.

Argument No. 3- "Have you SEEN Smith the last couple of years? Dude brought the Niners to the AFC Championship game and had the highest QB rating in the league before he got hurt!" 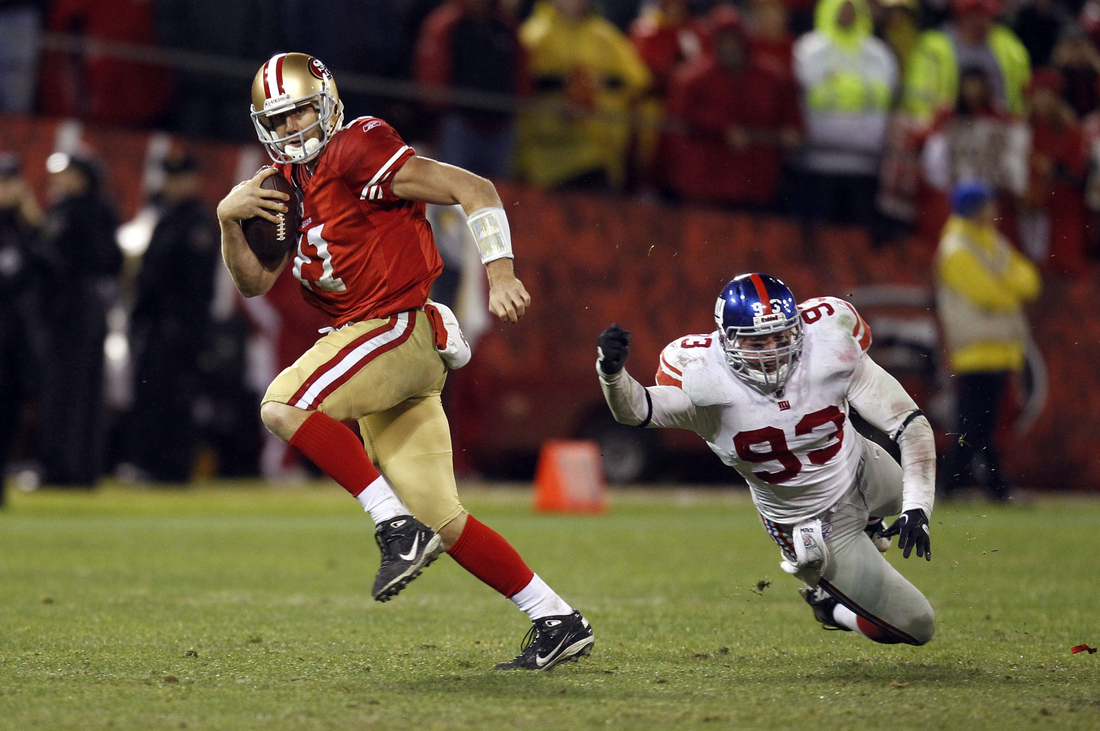 So many, many, many things to say about this. But I'll limit this to a few things.

First, haven't we been down this road before? Matt Cassel played like hot garbage in 2009 for the most part, then played at a passable level in 2010. So we, in all our naiveté, thought that meant he'd "progressed" as a starter and that 2010 was his new "floor." Boy were we wrong.

What actually was happening was that in 2010 (and 2008) Cassel was showing his absolute ceiling in optimal circumstances. Take away those optimal circumstances (great coaching, Moss/Welker, Weis, Jamaal Charles, ridiculously easy schedule, Dwayne Bowe in beast mode, etc.) and POOF! The "solid game manager" vanished and "Bad Matt" emerged.

Are we really willing to bet draft picks AND $8.5 million dollars a year that Alex Smith is different? The guy sucked on an absolutely epic level for FIVE YEARS. It's not like he was just bad as a rookie, or a second year player. Five years is a long, long time.

In: Chiefs, Cardinals
Maybe: Jets, Bills, Jaguars, sleeper team
Out: Everyone else

People are seriously underestimating Jim Harbaugh and overestimating Alex Smith. Harbough came to San Francisco and one of the first things he did was draft Alex Smith's replacement. The second thing he did was dumb the offense waaaaaay down and put an absolute minimal burden on Smith's shoulders. All he had to do was run plays designed by the best coach in the league and not screw it up, while allowing the Niners dominant defense and running game to do the rest.

Smith's injury is actually the best thing that could have happened to him. Let's face it, Kaepernick was breathing down his neck as it was. I'd be willing to put money down that Harbaugh would've replaced Smith eventually regardless. The concussion just gave Harbough an excuse, and one that would helped maintain Smith's value in the eyes of the football world.

Smith had the benefit of a top three defense, THE best offensive and QB coach in the NFL (by far), and a great running game. Are we really willing to bet that the Chiefs can get all of that going here? Why gamble $8.5 million and draft picks on that when he know that even in those absolutely OPTIMAL situations, the best Smith could do was be the guy who made announcers say things like this...

Smith had the benefit of a top three defense, the best offensive and QB coach in the NFL and a great running game.

"Alex Smith won't hurt your team out there"

"Alex Smith can avoid mistakes and protect a lead"

"Alex Smith is a steady player"

Let's face it, that's the kind of stuff that was said about Smith. And do people not remember that any time the Niners got brought up as a legit contender for a Super Bowl, Alex Smith was always the "but."

"Yeah, the Niners look great, but it all rides on Smith not holding them back."

Be honest, you've heard a statement exactly like that more than once the last two years. THIS is the guy we want the Chiefs to trade picks for? Just remember these two interconnected thoughts...

1) He's never, ever been successful under any coach but Jim Harbough

Seriously, think about that.

With Alex Smith, the absolute best case scenario is a game manager. The worst case is... well, you can look at the stats for yourself regarding his first 5 years in the league.

Reid and Dorsey, you guys should know that Pioli was run out of town in large part because of his failure to address the QB situation in a viable manner. If you repeat that mistake your first year, that's strike one.