The 2013 NFL Draft is around the corner and the next crop of players are prepping for that at the 2013 NFL Combine in Indianapolis, including Luke Joeckel, the left tackle out of Texas A&M, who many think the Chiefs will select with the No. 1 overall pick. Joeckel spoke to reporters at the Combine and revealed that he's already a fan of Kansas City barbecue. Below are a few highlights of Joeckel's Q&A with the media on Thursday.

Share All sharing options for: NFL Draft 2013: Luke Joeckel hasn't talked to the Chiefs, but knows KC has good barbecue

Have you talked to Kansas City?

Who have you talked to so far?
Well, I really haven't talked to many teams. Got in last night and was at the hospital to 10:30. I talked to two teams (Tennessee and San Francisco), but just short conversations. I really haven't had a chance to meet with anyone yet.
More: Chiefs will meet with Geno Smith
Would you like to play for the Chiefs?

Do you want to be the top tackle?

Yeah, definitely coming into this thing I wanted to be the first tackle taken in the draft. Now I know it's a long process
until then. I'm trying to do every single thing right to make sure that happens. I know it's a competition between him
(Central Michigan's Eric Fisher) against the other guys, you know (Oklahoma's) Lane Johnson. It's good type of competition between all of us. That's one of the fun parts about the combine - the competition aspect of it, going against some of the best athletes at your position in the country.

What NFL player did you look up to growing up?

Well, in high school and all that, I watched Joe Thomas. He's definitely the guy I loved to watch. I love the way he plays. I don't know about his weight room numbers and stuff like that, but he's just one of those guys that looks like he's got that brute strength, lumberjack strength, and I kind of pride myself on that too. A guy who doesn't get pushed around too much, and great pass block. Plays hard, plays to the whistle. That's the guy I watched in high school. 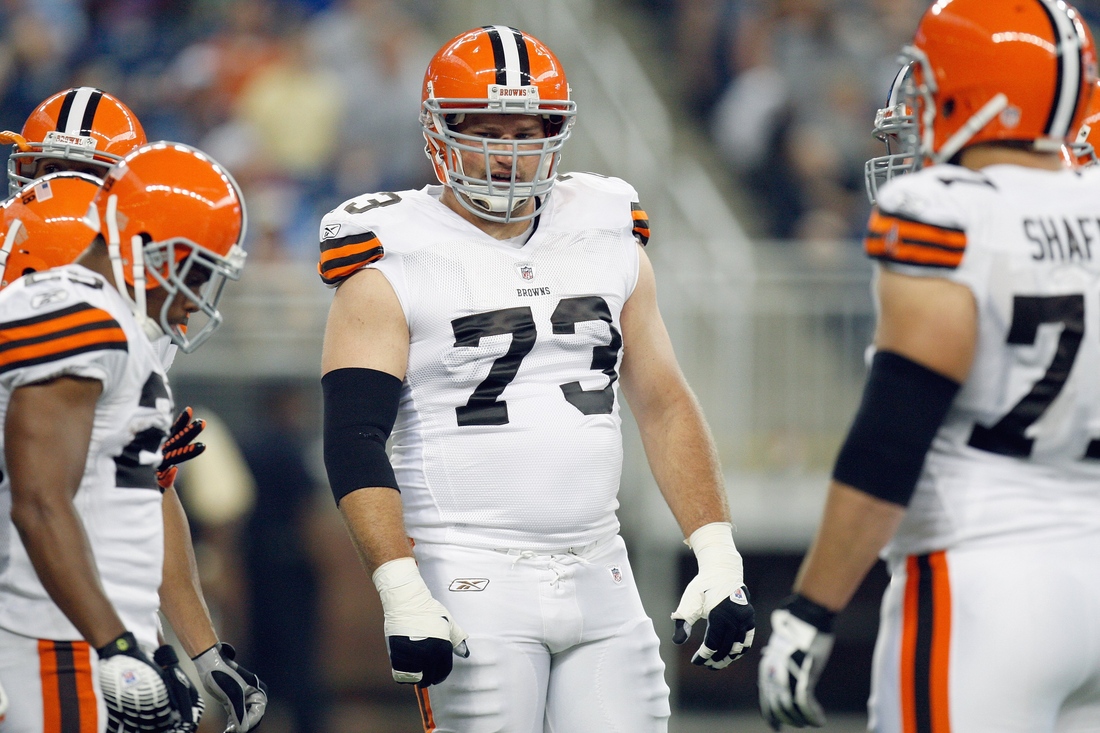 Texas A&M right tackle Jake Matthews is the son of Hall of Famer Bruce Matthews. Do you ask for advice?

Yeah, a little bit. I've talked to him about it. I'll ask him (Jake) questions, I'll ask his dad. He (Jake) is lucky that he's
got one of the greatest offensive linemen of all time as his dad, and he (Bruce) can coach him (Jake) up any time. I definitely try to take advantage of that.

How important is it to be the No. 1 pick?

It would be really cool, a dream come true. But the way I'm just looking at it, I want to get there. I am definitely striving
to be the No. 1 pick, going through this entire process and playing this season and all that kind of stuff. But my dream is to just play in the NFL. I know, being the No. 1 pick, after that, it doesn't really matter. You've got to go prove yourself in the NFL. It's just like that in college. Being the No. 1 recruit in college doesn't matter unless you step on that campus. It's the same thing. It's cool and everything, but going to any team I go through, proving myself there will be the biggest thing.

What do you like about being an offensive lineman?

I love offensive line. Growing up I always thought I was too athletic for the position. I was a quarterback in junior high. There are two (A) teams for junior high because 100 kids try out, and we were the quarterbacks for both teams. One at quarterback and one played tight end, and I always ended up on offensive line just because I was the biggest guy on the team. The offensive line is what I was born to play. I loved the physical aspect of it. You finish every play with a one-on-one block. There are not many other positions on the field like that. I love that part of it. I'm a background guy, and that's why belong on the offensive line.