With a new regime and possibly a new quarterback, the Chiefs will have a lot of big decisions this offseason. But all those decisions start with the question of Branden Albert's future with the Chiefs.

Most of the talk recently (and since Week 5 it seems) has been about what the Kansas City Chiefs are going to do with their top draft pick. But the key to this off-season all hinges around the decision on Branden Albert.

Albert: I'm a left tackle, not a guard

When Chiefs general manager John Dorsey was first introduced he was bombarded with questions regarding his draft philosophy. His answer was the same as you'd expect from any GM: best player available.

This caused a frenzied response from Chiefs fans and draftniks to debate the feasibility of taking Texas A&M's Luke Joeckel, who is considered by many to be the best player (and LT) in this draft, and keeping Branden Albert (or not) at the same time. The response made sense because Joeckel is the best player in the draft but the debate lies in the fact that the Chiefs already have a solid left tackle and so it's not really a need.

There's no way that both of these guys are Chiefs next season. Albert isn't moving from left tackle (and nor should he) and Joeckel isn't going to be drafted No. 1 overall to play anything other than LT.

The biggest piece to this equation -- besides the money -- is the health of Albert's back. He missed three games last season and left two games early with what were described as 'back spasms'. It's nothing that requires surgery from what we know but is something that requires due diligence from the Chiefs in finding out if it's an issue or not before they pay him a healthy contract.

Once the Chiefs determine that Albert's back is healthy or not we'll see the rest of the pieces of the offseason start to fit together. I'd think the Chiefs would want to figure that out as soon as possible so they know how to move forward with the rest of their decisions.

Speaking of his back, Albert has been working out down in Miami with trainer Manning Sumner, who put this picture out on Twitter: 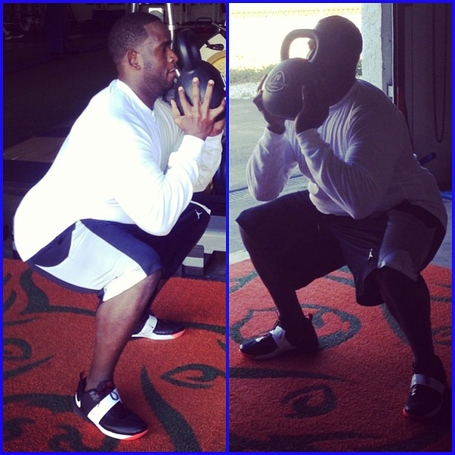