Kansas City Chiefs did what they were supposed to do vs. Washington Redskins

The Chiefs did what true contenders are supposed to do on Sunday, setting themselves up nicely for the stretch run.

Share All sharing options for: Kansas City Chiefs did what they were supposed to do vs. Washington Redskins

The Kansas City Chiefs destroyed and embarrassed the Washington Redskins.

Andy Reid and the boys did not only beat Washington, they dismantled them and made a clear statement: We will be heard from again.

Kansas City was coming off three straight defeats and walked into a snow globe better known as FedEx Field. My first reaction upon seeing the field conditions was fear. Normally, those types of elements level the playing field. Instead, the Chiefs overcame the weather and absolutely hammered the Redskins in a laugher.

Sure, Kansas City is still going to be the No. 5 seed. This game did not change the Chiefs' postseason outlook and likely did nothing to change the national perception of the team as a group who beats up on bad teams but isn't ready to top the elite ones.

The Chiefs did exactly what you are supposed to do against an inferior team: bury them.

Yet, this game validated a few things in the eyes of this man. The Chiefs did whatever they wanted against Washington. Alex Smith had another terrific game. Smith only threw for 137 yards, but it was the fashion he did it which was impressive (and led to his highest QB rating of the season).

Smith consistently threw the ball hard and accurate throwing snow, sleet and freezing rain. He was a general on the field, making plays and commanding the respect of not only his own team, but the opponent. For the third consecutive week, Smith played superb football.

At one point this season, the Chiefs were 9-0 and leading the AFC West. Now, they are 10-3 and yet I have infinitely more confidence in this team going to the Super Bowl now then I did a month ago. Why? We have a quarterback. If this team gets into a shootout with the Denver Broncos, it could win it. I never could have written that after the Buffalo Bills game.

Of course, there is always Jamaal Charles. The 26-year-old from Texas continues to be one of the greatest weapons in the NFL. Even on the snow, Charles dashed and darted by would-be tacklers for 151 rushing yards and two touchdowns.

What Andy Reid said after the game 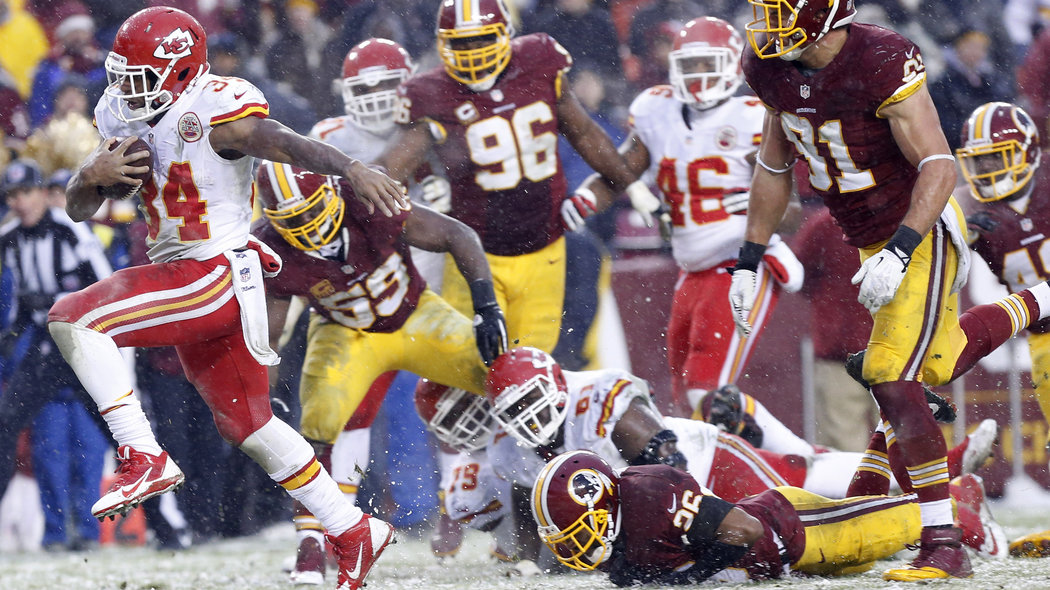 Lastly, the defense finally got rolling again. The unit broke out for six sacks including a pair for Tamba Hali, only weeks ago feared done for the season. The defense was terrific, forcing two turnovers and holding Washington to a 3-for-15 line on third down.

Ultimately, Kansas City played like a true contender. The Chiefs did exactly what you are supposed to do against an inferior team: bury them. Earlier in the season, Kansas City never could have authored a game like this. The offense could not have moved the ball this effectively to make it a well-rounded afternoon.

Now? The Chiefs can make it happen on both sides of the ball. Should this complimentary football continue, Kansas City is one of the most dangerous teams headed into the postseason.